On the 23rd of March 1931, twenty-three year old Bhagat Singh, the legendary revolutionary icon in the struggle for liberation and emancipation of the masses in the Indian subcontinent and his comrades in arms, Sukhdev Thapar and Shivaram Rajguru, were hanged at Lahore’s central jail. 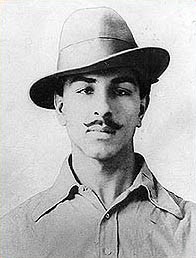 Bhagat Singh, 1929The British imperialists were terrified of a radicalised left revolutionary current taking hold of the mass movement against the imperialist rule. Hence, these young revolutionaries were silenced. But the mass outrage at their political assassination shook the colonial rule. Thus, the situation in the Indian subcontinent was described by a British visitor, C. F. Andrews, in 1932:

“The scene in India at the present time is that of the Roman Empire nineteen hundred years ago. There was the same vast order outwardly maintained. But within this area of apparent calm a surging, heaving ferment had suddenly begun to appear like volcanic lava cracking through the surface of the soil.”

For the martyred revolutionaries, like millions others, the Bolshevik revolution of 1917 was a source of inspiration that electrified the liberation movement in India---like elsewhere. The youth were particularly invigorated by this revolutionary upheaval. The formation of the Hindustan Socialist Revolutionary Army (HSRA) was an expression of this growing radicalisation at those times. The heroic deeds of Bhagat Singh, Sukhdev, Rajguru, Chandershekar Azad, Ashfaqullah Khan, B.K. Dutt and other young revolutionaries’ fired up the imagination of vast sections of the oppressed masses. But unable to find a Marxist path to a revolutionary salvation, these youth resorted to an ‘armed struggle’.

The chain of events started when Lala Lajpat Rai, a radical peasant leader, was beaten up and severely injured by the police while demonstrating against the Simon commission at the Lahore railway station. He died of these wounds on 17 November 1928. The HSRA militants shot and killed an assistant superintendent of police, John Poyants Saunders on 8th April 1929 in revenge. Bhagat Singh and several other comrades of the HSRA were arrested and accused of this killing besides throwing non-lethal bombs at the treasury benches of the Central Legislative Assembly in Delhi. Their trial lasted for five months. During the proceedings the revolutionary statements of the accused fired up the youth and their movement gained mass support base. This sent tremors not only in the echelons of the imperial rulers but also amongst the native bourgeois leaders who saw this radical tendency pushing them out of the leadership of the liberation struggle.

A verdict was passed on 7th October 1930 by Justice A. R. Coldstream, after the regime issued the Lahore Conspiracy Case Ordinance which dispensed with the need for a defense counsel, defense witnesses and presence of the accused. Evidence showed that Mahatma Gandhi could have saved the lives of these revolutionaries by making a plea for clemency during his negotiations and pact with Lord Irwin, British viceroy to India at the time. The Gandhi- Irwin pact was concluded on the 19th of March 1931 which involved Tej Bahadur Sapru and other mediators. There was an outrage against this pact as it ignored the position of Bhagat Singh, Rajguru and Sukhdev. One of the most prominent leaders of the Congress, Subhash Chandra Bose, was furious: “Between us and the British lays an ocean of blood and a mountain of corpses. Nothing can induce us to accept this compromise which Gandhi has signed.”

On the day of Gandhi’s visit to Irwin, Bhagat Singh and his comrades sent a letter to the viceroy. Instead of pleading for clemency, they asked the viceroy to treat them as prisoners of war and have them shot rather than hanged. At the subsequent All India Congress Committee (A.I.C.C.) meeting at Karachi the main slogan chanted was, “Gandhi’s truce sent Bhagat Singh to the gallows.”

Decades after his martyrdom the dominant intellectual and political elites in India and Pakistan have distorted his legacy. In Pakistan the obscurantist state actors and the reactionary elite have suppressed and desecrated his legacy by callously denouncing him an infidel and a rabid terrorist. In India, he is cast a nationalist freedom fighter while his socialist and revolutionary character is deliberately ignored and caricatured. Although Bhagat Sing was not a Marxist from the beginning of his struggle yet through the experience of the armed struggle and the lessons he learnt by reading Marx, Engels, Lenin and Trotsky, he became a revolutionary socialist.

“On January 21, 1930, the accused in the Lahore Conspiracy Case appeared in the court wearing red scarves. As soon as the magistrate took his chair they raised slogans ‘Long Live Communist International’, ‘Lenin’s name will never die’ and ‘Down with imperialism’. Bhagat Singh then read the text of the telegram in the court and asked the magistrate to send it to the Third International.”

Shiri Ram Bakshi in his book, Bhagat Singh and His Ideology, cites another quote by the young militant:

“By ‘Revolution’, we mean the ultimate establishment of a new order of society which may not be threatened, and in which the sovereignty of the proletariat be recognised and a world federation should redeem humanity from the bondage of capitalism and misery of imperial wars.”

These and other similar statements lucidly lay bare the fact that Bhagat Singh was not a nationalist but an internationalist. He had come very close to a Marxist position and believed that a socialist revolution in the Indian subcontinent was the logical conclusion of the liberation struggle. A victorious insurrection here would be an inception for the spreading of the revolution worldwide. Bhagat Singh and his comrades were unambiguous about the treacherous role of the native elite, the ‘Brown Sahibs’. In Raj Kumar Santoshi’s well researched film, ‘The legend of Bhagat Singh’ (2002) Bhagat is quoted saying in a speech:

Sixty five years after the so-called independence through a bloody partition, teeming millions remain oppressed through capitalist drudgery and imperialist plunder. The ruling classes of India, Pakistan, Bangladesh and other countries have wrecked havoc with society. Misery and poverty stalk the subcontinent. The future under capitalism only offers barbarism. It is a historical challenge for the new generations to rediscover the revolutionary legacy and to redeem the struggle of Bhagat Singh in life and in death.