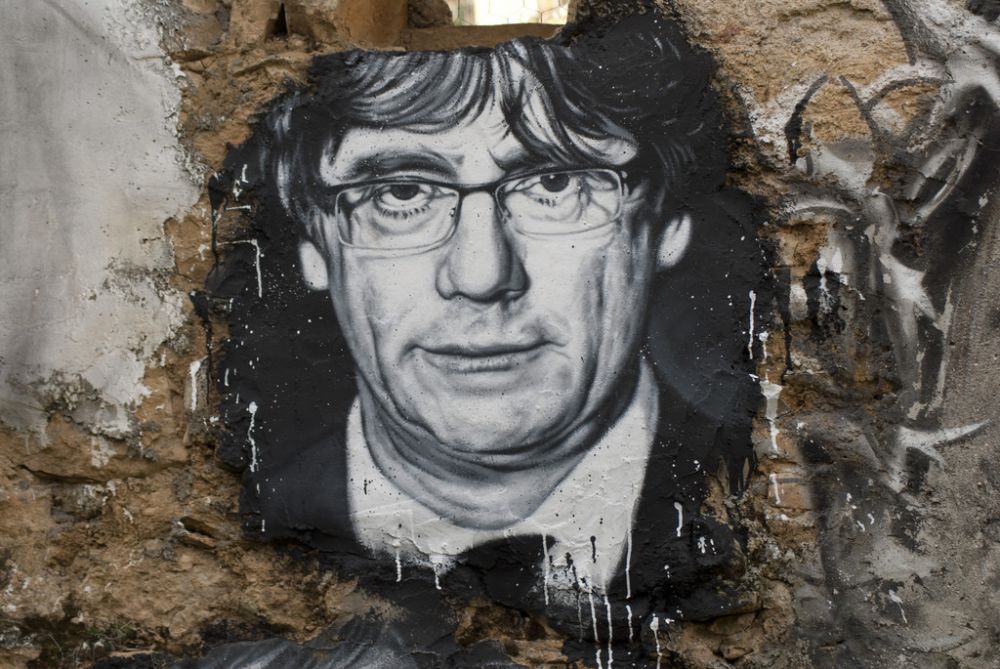 The former Catalan president, Carles Puigdemont, once again resides in Belgium. He first fled to the country in order to escape conviction for sedition and rebellion by the Spanish state after he (formally) declared the independence of Catalonia on 27 October 2017. Ever since, the Spanish government and judiciary have tried to convince other European states to arrest him and send him back to Spain for trial. So far, they have been unsuccessful. Following a short period during which he was under arrest in Germany, Puigdemont is now back in Belgium.

Candidate for the European elections?

There were rumours that Puigdemont will be a candidate on Flemish nationalist party, “New Flemish Alliance” (N-VA) list for the European elections, to be held on 26 May 2019. The rumours appeared in the Belgian press and were initially neither denied nor confirmed by both Puigdemont nor the N-VA. But two weeks later, Puigdemont clarified the situation in an interview with the Belgian press:

“No I will certainly not figure on that list. I fight for Catalonia. I am only temporarily here. If possible I would return tomorrow. Every day I say this is my last day in exile. I want to work for the freedom of my country, my struggle has to be there.”

Nevertheless, Puigdemont undeniably has close connections with the N-VA. Significantly, he made the above comments while he was visiting the local Lommel branch of the N-VA, to lend them his support for the coming elections.

What kind of party is the N-VA?

Belgium is a federal country where the north is Dutch speaking and the south speaks French. There is also a very small part of the country that is German speaking, while the capital, Brussels, is formally bilingual (French and Dutch) and in practice multilingual. The Dutch-speaking part of Belgium is called Flanders and its people are called Flemish. Flemish nationalism has a long history and has been dominated for at least the last hundred years by the bourgeois and petty bourgeois. 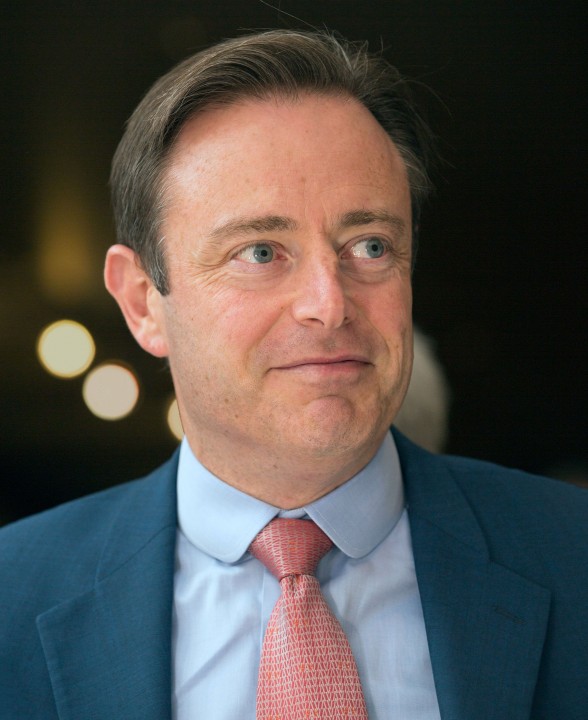 Many N-VA leaders, including chairman, Bart De Wever, have family ties with Flemish nationalists who collaborated with the Nazis / Image: Miel Pieters

In the 1930s, Flemish nationalism went over to fascism, and during the Second World War it collaborated with the Nazis. Many leaders of the N-VA, including the current chairman, Bart De Wever, have direct family ties with these collaborators. Today, the N-VA can be described as a very right-wing, nationalist party. They are the worst enemy of the workers’ movement in Belgium. There is not a grain of progressivism in the NV-A’s nationalism.

They oppose, for instance, sending Belgian social security money to the French-speaking, Wallonia region in the south. They describe this as the indefensible transfer of wealth from the hard-working Flemish people to the ‘other part’ of Belgium. They once engaged in a provocative stunt where they went to the Walloon region on a bus to distribute pamphlets, with fake money printed on the flip side: implying that the Flemish Belgians were subsidising the south.

The N-VA originated in 2001 as a split from the former Flemish nationalist party. In the 2003 elections, they gained only one seat in Parliament and none in the Senate and appeared on the verge of extinction. Now they are the largest political party in Belgium, having more than double the number of parliamentary seats of any other party in Flanders (where one can only vote for Flemish parties.)

The party achieved this remarkable breakthrough on the basis of right-wing and often openly racist rhetoric. For instance, they speak about “cleaning” neighbourhoods with significant migrant populations. Additionally, the N-VA Minister of the Interior sent the police into these communities “to combat terrorism”. You could describe them as somewhere between the Tories in Britain and the League in Italy.

But there is another aspect of their behaviour that plays an important part in their success: they often say they are “against the system.” Of course, by this they do not mean the capitalist system: they mean the socialists. Indeed, prior to the current, right-wing government, the socialist parties have been in coalition governments for nearly 30 years. In the previous government, they had the prime minister. There have been also several cases of corruption, implicating socialist politicians in the last 20 years. They lost a lot of support by doing the dirty work for capitalism in its crisis-ridden state.

Of course, it is not these policies of the social democrats that the N-VA attack. They attack all conquests of the workers, such as unemployment benefits and pensions; and they advocate severe cuts to the social security system “in order to save it from bankruptcy”.

Why is Puigdemont useful for the N-VA?

For the past 70 years, Belgium has seen a number of political disputes around the national question and numerous state reforms, resulting every time in more power and money for the regions (Flanders, Brussels and Wallonia) and less for the federal state (Belgium).

In the first paragraph of their constitution, the N-VA say that they aim for an independent Flemish state. After the Belgian elections of 2014, in which they became the largest party, the N-VA entered a right-wing government. Strangely enough, they promised to refrain from making any demands on national lines for the government’s five-year term, and promised to faithfully implement the state reforms decreed by the previous government.

“A government without the socialists is already a reform of the state in itself”, they stated at the time. This is typical for petty-bourgeois nationalists who, at the moment of truth, shy away from fighting for independence. Instead they try to get more influence in the state they are supposed to combating.

Rather than fighting for Flemish independence, the NV-A is trying to become the main bourgeois party in Belgium, replacing the Liberals and Catholics / Image: public domain

In practice, the NV-A is trying to become the main bourgeois party in Belgium, displacing the Liberal and the Catholic parties that fulfilled the role previously. They are prepared to do anything to please the capitalists – and not only the Flemish capitalists.

For instance, Belgium planned to close its existing nuclear plants by 2025. The N-VA is the only party in government that wants to postpone this closure for 10 years, which suits very well the French capitalist owners of the plants. The N-VA is also the most ardent proponent of the replacement of the current, F-16 Fighting Falcon in the Belgium air force with the American F35, thereby serving US capitalism.

Inevitably, these policies have led to consternation amongst the hardcore of their membership, who take the demand for independence seriously. Already, two of their members of parliament have split over this issue and kept their seats as an independents. And here Puigdemont comes in very handy. The N-VA can say: “For the moment, the conditions are not ripe for Flemish independence. But see, we have not abandoned our principles! We support the move for independence by our Catalan brothers with all our forces!” 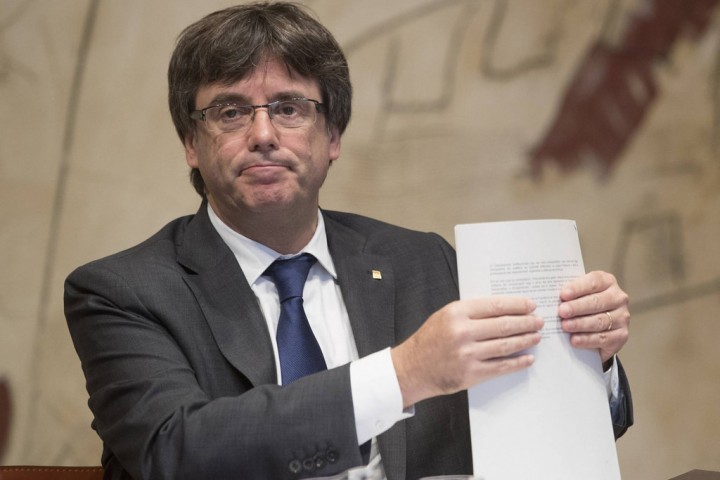 Puigdemont has been received as a hero in several local branches of the N-VA, but the party does not support the insurrectionary content of the Catalan independence movement, and on social and economic questions is far closer to the (now ousted) PP government of Rajoy / Flickr, Salvador García Bardón

Puigdemont has been received as a guest in several local branches of the N-VA, where he is welcomed as a hero. Of course, this does not mean that the party supports the social content of the Catalan independence movement, nor its defiant mobilisations, such as the 3 October strike in 2017. On social and economic questions, they were much closer to the (now ousted) PP government of Rajoy.

The position of the Marxists

Since the beginning of the revolt in Catalonia, the Belgian Marxists of the IMT have strongly defended the right of the Catalan people to self-determination and a Catalan republic. They participated in solidarity demonstrations. Discussions in Ghent, Brussels and Antwerp were organised, and a pamphlet was published. We explained that independence could only be achieved by revolutionary means, and that the movement could be the spark, not only for a socialist Catalan republic, but for revolution in the entire Iberian peninsula. 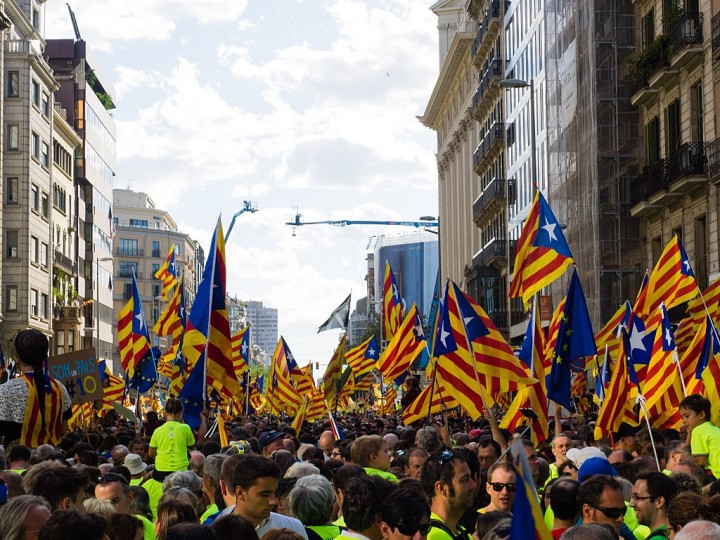 Puigdemont's association with the N-VA has destroyed any credibility he might have had in the eyes of the Belgian working class, and has certainly not helped the cause of Catalan self-determination / Image: Màrius Montón

We have condemned the oppressive actions of the post-Francoist Spanish state and the incarceration of Catalan politicians. In doing this, we often had to go against the stream of working-class opinion because, in Belgium, nationalism has historically been associated exclusively with right-wing and extreme right-wing politics, which sow division in the working class. This is especially the case in Flanders.

The close collaboration of Puigdemont with the N-VA totally destroyed any credibility he might have had in the eyes of the Belgian working class, and has certainly not helped the cause of Catalan self-determination.