Belgium, the country where compromise and moderation seemed for a long time to be part of the genetic make-up of society, is experiencing a level of social confrontation rarely seen before. 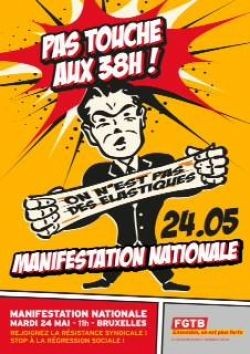 Photo: FGTBThe country is tired of austerity and literally sick of increased pressure on the workplaces: the Belgian worker is not by accident the biggest consumer of antidepressants in the European Union and is suffering from an epidemic of burnouts. Burnout has become for the modern worker what silicosis was for the 19th century worker.

The accumulated tension and pain which in the case of many workers results in mental illnesses is beginning to be reflected outwards sometimes ending up in violent confrontations with the bosses or the police and increasingly in radical and spontaneous strike action.

The first homogenous right wing government in more than two generations, which came to power in 2014 does not hide its Thatcherite ambitions. It is  pushing for thorough counter reforms and for the breaking of the unions. But this task is harder than seems. After a year and a half of generalised union struggles (21 national days of action, including the biggest 24 hour general strike since the second world war and two national demonstrations with the participation of 120.000 and 100.000 workers)  a short lull followed in November last year.

A significant layer of the working class had already been on strike for 4 or 5 days since the autumn of 2014. This was interpreted by the government and the bosses as a serious defeat which they had inflicted on the workers movement.  Then came the new terrorist attacks of the Islamic State organisation in November in Paris which were used as an excuse by most of the union leaders to stop protesting. The attack also provided the first testing ground in Belgium for an undeclared state of emergency and for massive military presence in the streets of Brussels. But this only partially cut through the class struggle. The railway workers, for instance, went on strike for two days in January this year.

The next terrorist attack on March 22 hit Brussels brutally and provoked an unseen commotion. But contrary to France, the Belgian government was unable to create, in society and in its own ranks, the kind of ‘National Unity’ it needed and which prevailed for a while in France after the attacks. The weeks after the attacks were riddled with recriminations between different wings of the security apparatus.

There were  accusations between the minister of Interior and some of its police chiefs. The  Minister of Mobility, who was in charge of airport security was dismissed after leaked documents revealed her ‘negligence’ of security warnings from the EU. Belgium, ‘the failed state’, has become a major subject of debate and worry. Discontent is also growing in the airports where luggage handlers have been on on strike (spontaneously again) along with the the customs police and the general police staff.

The national demonstration in solidarity with the victims of the terrorist attacks, a ritual seen in all the countries hit by the attacks was cancelled under the pressure of the Mayor of Brussels and the Minister of Interior for …. security reasons.  Instead of the demonstration the police de facto authorised a group of racist and extreme right wing hooligans to march in the centre of Brussels, clashing with the local - migrant - population.  One week later some hundreds antiracist and antifascist demonstrators were arbitrarily arrested together with the President of the Human Rights League by the Brussels police. This again fuelled  a national debate and a clash between the head of the police and the mayor of Brussels.

Chaos for commuters expected this Tuesday 31 May during general strike in public sector #Belgium @France24_en pic.twitter.com/coM81bgj9T

It is against this background that the government decided to upgrade its austerity package (cutting pensions of public service workers) and also of introducing a Belgian version of the hated French Loi El Khomri. In Belgium it is called Wet Peeters and envisages to end the 38 hour week and the 8 hour day and introduce in its place the 45 hour and 50  hour week and the 9 and 11 hour working day.

An editorialist of the Brussels centre paper Le Soir warned the government against the rhythm, the timing and the methods used in this new onslaught : ‘In ‘normal life’, the Belgians have suffered within the space of a few days, the Panama Papers as well as the fundamental reforms of the pensions and the organisation of work. All this have been announced without social negotiations which serve as a cushion. This is much’.  Indeed it is too much for the workers to swallow. This new attack has forced the unions to establish a new plan of action which started with a national demonstration on 24 May in which 80.000 workers participated. The official next step is a 24 hour general strike called for 24 June by the socialist union with the support of the some christian unions. In September and October when the Wet Peeters will be voted, a new national demonstration has been called for 24 September and a general strike, called by all the unions, on 7 October.

But since March and April the mood amongst the population has radically changed. After the terrorist attacks a poll revealed that the dominant feeling was not fear of sorrow but one of anger. Anger at the terrorists, of course, but also an undetermined and unfocused general anger. Some sectors of the working class were trying to find an expression for their rage. The first massive expression of this was the one day strike of the prison guards on 26 April protesting against the announced 10% cut in the budget. The next day the prison guards of the most understaffed and overpopulated prisons in Brussels and the south refused to go back to work. Spontaneously they decided to go ‘until the end’ i.e. an unlimited general strike which is still going on.  The uncompromising attitude of most of the shop stewards and the rank and file workers in this strike is remarkable. Proposals, sometimes partial concessions by the government which would have been accepted in the past were radically rejected.  In some prisons the police officers who replaced the prison guards also went on spontaneous strike. This forced the government to have the military to replace the police.

Then after the national protest on 24 May, the railway workers started a spontaneous strike which is ongoing. It has hit the workplaces as well in the Flemish north as in the French south. But in the north the union leaders are actively sabotaging the strike, which is not the case in the south or in Brussels.  Thus, the whole railway system in the south is completely paralysed while it is disrupted in the north. The uneven character of the strike movement is used by the government to that claim only the lazy and strike prone Walloons are protesting against the government. But the public opinion, although quite volatile, is turning largely against the government and its policies in both the Flemish and the French parts of the country.

Opinion polls show, that if there were elections today, parties in government would lose their parliamentary majority by a big margin. Importantly, the left wing PVDA/PTB (former Maoist organisation now left reformist party) is gaining strongly. They stand to increase their number of MP’s from 2 to 10. It would become the 3rd party in the south of Belgium overtaking the Christian Democrats and the Green party. It is the first time ever that a party to the left of the Socialist Party achieves this position. In itself it is a sign of the sharp shift to the left of a layer of the working class.

In the North the PVDA also stands to increase its vote and would reach about 5% of the vote. Here however, the biggest shift is towards the extreme right wing Vlaams Belang at the expense of the ruling Flemish nationalist N-VA party. Other interesting data show that in Flanders 45% of the population supports the new plan of action of the unions. One third of the ruling Christian Democratic party’s electorate in the north supports the plan of action the same is the case for 25 % of the ruling liberal party and even 16% of the right wing nationalist N-VA. The ground under their feet is becoming increasingly shaky.  On Tuesday 31 May, the public services protested all over the country.

Now the bus drivers in the south who have decided to come out in an all-out strike. This week the magistrates will be on strike for the first time since 1917. The idea of an all-out general strike is being debated by many activists and workers. The strikers have also radicalised their demands. Where in the past, they would demand this or that concession of the government, the demand for the fall of the government is gaining popularity.

It is no accident that an editorial of bourgeois daily points it finger to France in trying to explain the development of spontaneous mass strikes. It even pretends that the workers were infected ‘by the French revolutionary virus’. The ongoing struggle of the French workers against the Loi El Khomri is inspiring Belgian workers especially in the French south. But the movement in Belgium has its own dynamic.

The most striking feature has been the spontaneous and explosive character of the strikes, the spreading of the idea of an all-out general strike and the uncompromising attitude of the rank and file workers. This is having an impact on the union leaders, some of whom are choosing to ride the waves of strikes while others choose to oppose them.

It is not clear yet what the next days and weeks will bring. But the idea of a ‘spontaneous all-out strike’ is present everywhere. A lot depends on the events in France. But cracks are appearing in the Belgian government. Yesterday, the minister of the railways announced that he was ready to withdraw the measures which provoked the strike wave. He was immediately attacked by other parties and by the right wing press. They correctly pointed to the fact that if the measures were withdrawn, even temporary, this would be seen as an encouragement of strikes in other sectors. Whatever happens we can say that the genie of explosive class struggle is out of the bottle, in Belgium too.