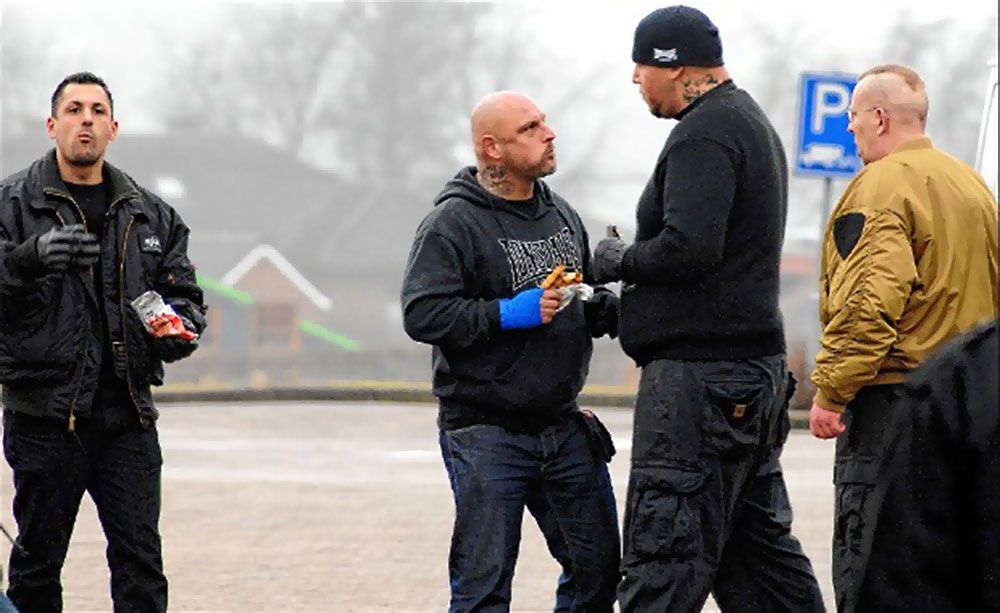 Late on the night of Sunday, February 26, twenty black hooded strongmen – so-called security guards of an unknown company – were escorted out of the Meister Benelux engineering plant by the police. They had arrived from Germany (!) earlier that day driving vans and trucks. Armed with baseball bats, rubber truncheons, teargas sprays and bulletproof jackets, they entered the company with the aim of organising the delivery of car parts to the automotive industry in Germany.

The bosses’ militia used heavy handed methods against the four workers responsible for the maintenance of the machines. They were told not to move but one worker succeeded in escaping and phoned to the police. During the action two workers were injured by these militiamen. The unions were also informed and very quickly activists from other factories came to strengthen the picket and the blockade of the gates.

Earlier that week, the management had threatened to delocalise part of production to the Czech Republic. In a first reaction the workers and their unions locked up the management to force them to change their position. Then they decided to block three lorries loaded with car parts due to be delivered soon.

It soon became clear that faced with a determined reaction of the workers, the management had resorted to the use of a private militia to break the union’s action. The socialist metalworkers’ union denounced these “methods with a fascist smell”. For many workers this was a real shock. Others referred to methods used in the 1930’s to crush the left movement. In a country proud of its so-called tradition of “consensus”, “social contracts” and “negotiations”, such methods seemed impossible today.

This model ‘à la Belge’ is praised internationally, referred to as a model by the International Labour Organisation and has even been exported to countries like Morocco where “social conciliators” have been trained recently by the Belgian government. It is so ingrained in tradition that people think it is part of the Belgian ‘national character’.

The social psyche of many trade unionists has been shaped by concepts born out of the period of unprecedented upswing, the so-called “golden 60’s and 70’s”. The reality is that as the material base for this “social model”, i.e. a period of substantial economic growth, is quickly evaporating, the bosses resort to the old methods of blackmail, “fait accompli” decisions at all levels of the pyramid of social consultation and a unilateral war against social rights and the unions.

Some of the bosses go further and are ready to resort to illegal and violent methods of coercion of their workers. They are a minority, or at least they were until recently. In a TV poll, 89% of the respondents agreed with the idea that “social conflicts are going to become more violent” (RTL, Controverse, March 5, 2012). An experienced “social conciliator” working for the Ministry of Labour, Jean Marie Fafchamps, confirms that “industrial conflicts have become more tense and aggressive”.

The bosses are actually more in tune with the nature of this epoch of heightened class struggle than the trade union leaders who are desperately trying to cling to the methods of the “old period”. The regional leader of the socialist union FGTB, Thierry Bodson, claims that “in an extremely high number of closures or restructuring of companies (i.e. mass sackings) there is not one day of strike or even one incident noted”.

At the level of the workplace, trade union rank and file activists are beginning to realise more and more the futility of this “non-conflictual” approach. The new situation is forcing them to go back to the “class struggle” methods of the past. And the bosses are also fully aware of the new situation. In an open letter the bosses’ organisations in the French-speaking part of the country, Wallonia, condemn what they perceive as “trade union terrorism” and the frequent social conflicts that start “without the slightest respect for the established procedures”.

The workers reacted well and very courageously maintained the blockade of the factory. By maintaining the pressure they succeeded in turning the situation to their advantage. The bosses’ militia was now locked in the factory. They could not leave without the authorisation of the unions. Now it was they who called for help from the police. After long negotiations with the Minister of Interior, the management and the local police, they were escorted empty handed out of the factory. They left the truckloads of material inside the factory – a clear victory for the workers.

But to the astonishment of the unions the police did not arrest the thugs, nor did they ask for their identity documents! Even the regional socialist minister of economic affairs denounced this the next day in the media. The question has provoked sharp debates in the federal parliament where it was raised. It is obvious that the police and the justice system had refused to apply their own laws against “private militias” voted in 1990. The indignation increased when it was realised that the bosses’ thugs had opened all the wardrobes of the workers and searched through them.

The state apparatus cannot be trusted to act in favour of the workers during a labour dispute. Thirty-five years ago the management of the shipyard Boel Temse also tried to uses a security service company against the unions. This company, "Inter-Garde," established files on activists and intimidated the workers in the workplace. The shipbuilders nicknamed the security guards, “Intergangsters”. By mass action, the unions managed to limit their role to strictly guarding the buildings. The workers then rightly feared the semi-militarisation of the company, especially in cases of social conflict. Now, as then, it has been the rapid and spontaneous reaction of the workers that forced the boss and his militia to back down. Workers can only rely on their own strength.

However, more is needed. The unions warn all the bosses that if these methods are repeated in another factory they will mobilise the workers from the whole industry and across the country for a massive and resolute picket. If the bosses continue to use private militias, we must also organize to respond to them, just as workers did in the 1930s. Then the Belgian labour movement organised the USAF (Union Socialiste Antifasciste) and the Workers Defence League (a workers’ militia) to physically protect the activities of unions and the Labour party against fascist attacks. We have not reached that point yet. But we had better prepare for the stormy period ahead. More generally, a layer of workers is beginning to realise that times are really changing. Open class struggle is now the main feature of “social relations”, not “consultation”, nor “negotiations”.