Details
In Defence of Marxism
04 October 2006

Britain
Share
Tweet
Today marks the 70th anniversary of the Battle of Cable Street, a landmark event in the history of the British working class, when workers in London’s East End dealt a severe blow to British fascism. In commemoration of this victory of the working class, we republish Ted Grant’s pamphlet The Menace of Fascism - What it is and how to fight it, which offers an analysis of fascism and a programme for how to fight it.

Today marks the 70th anniversary of the Battle of Cable Street, a landmark event in the history of the British working class, when workers in London's East End defeated Sir Oswald Mosley's Blackshirts and dealt a severe blow to British fascism, from which it would never recover.

A BBC article today asked the question, Does Cable Street still matter? We can only answer this in the affirmative. With the emergence of the BNP and other similar movements in Europe, the Battle of Cable Street contains many valuable lessons today for workers and youth.

The BNP of today is not the British Union of Fascists of 1936. The BNP poses no threat from the point of view of coming to power - locally or nationally. They do, however, pose a very real threat to the local communities they poison with their racist filth. A determined campaign by the labour movement, based on a genuine socialist programme exposing their lies on immigration as well as explaining how houses and jobs can be provided for all, can stop them in their tracks.

The Battle of Cable Street must be put into the proper context. The world slump of 1929-1933 saw the emergence of British fascism as a serious force in the country for the first time. Formed in 1932 the BUF had a definite impact with its full time blackshirt Defence Force. At its high point the BUF had some 40,000 members. Buoyed up by the victory of fascism in Italy, Germany, and Austria and supplied lavishly with funds by big business as well as by the support from aristocratic and Tory sympathizers, the BUF went on the offensive from 1934-1936. The BUF also received the backing of some of Britain's big papers the Daily Mail, Evening News and the Sunday Dispatch.

The British capitalists saw the in the BUF a militant and extra-parliamentary battering ram that could be used against the working class in times of crisis. Although the British capitalists were able to emerge from the world slump without the need for direct action against the working class, they nevertheless kept the fascists around as insurance for the future. Thus the fascists were able to operate under the protection of the state.

As opposed to today, the British ruling class in the 1930s still had the benefit of the ages-old traditions of the Empire. They were able to make long-term plans as opposed to the blind greed and get rich quick schemes of today's British capitalists. The ruling class understood that Britain would not be immune to the social upheavals that were taking place in Europe and around the globe. The French ruling class found itself faced with a pre-revolutionary situation and a mass strike movement. The Spanish revolution continued as civil war raged between the Republic and the Fascists. The British ruling class looked across the Channel and trembled with fear, knowing what lay in store for them in the future.

In the years before the Second World War British troops were not being trained to stop advancing panzers but in civil war tactics. The Civil Guard was established and trained in the fine art of strike-breaking - members of the ruling and middle classes were taught military tactics as well as how to drive lorries, trains etc, in case there was serious trouble with the working class.

Imitating their counterparts in Germany and Italy, complete with military fatigues and goose-stepping, the BUF began to organize provocative marches through working class and Jewish districts of London and other areas of the country. The BUF left nothing to the imagination and clearly showed the workers of Britain what was in store for them should the fascists come to power. At mass rallies in Olympia in 1934 and Albert Hall in March 1936 hecklers and peaceful opponents were violently attacked by fascist thugs. Rather than stop the fascists, who beat men and women alike, the police set upon the anti-fascist protesters!

The British working class responded to the threat of fascism. Every fascist demonstration was met by an even greater counter-demonstration of workers and anti-fascists. All across the country the working class rallied against the threat of the fascists. The fascists were unable to hold meetings in Glasgow and in Bermondsey in London, tens of thousands of workers erected barricades preventing Mosley from marching. This was the build up to a showing of force between the fascists and the working class.

The BUF began a series of provocations in East London - with its large Jewish population and strong working class traditions. A mass rally was held in Victoria Park in June and a campaign of terror was launched. The fascists held street meetings, smashed up and firebombed Jewish shops and physically attacked workers and immigrants. 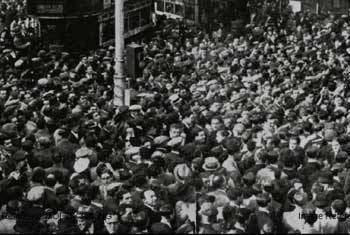 The BUF announced a show of force for October 4. This march of uniformed fascists who would march in military formation was designed to intimidate the East End's working class and Jewish population. Despite a massive signature campaign to ban the march and despite calls from the labour movement, the government refused to put a stop to the march. In fact the government aided the fascists in every way it could. Some 10,000 police from across London were called in to provide protection for the fascists and clear a path for the march.

Rallying around the slogan "They shall not pass" some 500,000 workers turned up on the streets of East London to stop the fascist march. The police attacked the workers in an attempt to make way for Mosley. A pitched battle ensued in which the workers threw up barricades of lumber, mattresses, doors from nearby flats and furniture. Lorries were overturned. Workers and youth threw marbles and covered the streets in broken glass to prevent mounted charges.

The united action of London's working class, including members of the Labour Party, the Communist Party, the ILP, the Trotskyists and YCL, defeated the police and the fascists. Mosley was forced to abandon the march, and with their tails between their legs the fascists lined up in military formation and marched - in the other direction! The united action of the working class had defeated the fascists and prevented them from marching into the East End.

As Ted Grant, himself a participant in the Battle of Cable Street, wrote:

"The defeat at Cable Street in 1936 dealt a severe blow to Mosley. Afraid of the organised might of the working class so militantly demonstrated, the East End fascist movement declined. The spectacle of the workers in action gave the fascists reason to pause. It induced widespread despondency and demoralisation in their ranks; their victory over the fascists imbued the working class with confidence. This united action of the workers at Cable Street demonstrated anew the lesson: only vigorous counter-action hinders the growth of the menace of fascism."

In commemoration of the victory of the working class over the BUF in 1936 in the Battle of Cable Street, we provide a link to Ted Grant's pamphlet The Menace of Fascism - What it is and how to fight it, which offers an analysis of fascism and a programme for how to fight it.