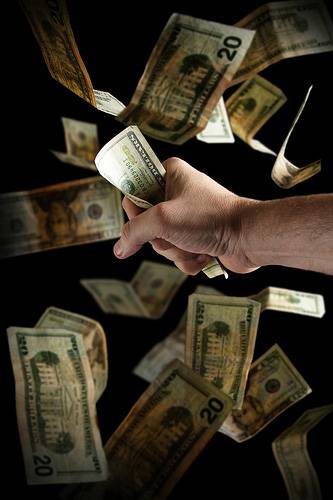 Why is New Labour hurling yet more of our money at the banks? The latest handout has been described as the ‘world’s biggest bank bailout.’ It’s costing every household in Britain £2,000, on top of all the money wasted last time round.

This plan costs nearly £50bn in total, more than the £37bn the government pumped in to the banks a year ago. £40bn would build more than 1,500 schools or 70 new hospitals, but the banks, we are told, are more important than health or education. Brown boasted last year that his bailout had ‘saved the world.’ Not quite, it seems. Now the banks are in further financial difficulties and back with their begging bowls.

Mervyn King, governor of the Bank of England, for once got it right when he commented, in a parody of Churchill, “Never in the field of financial endeavour has so much money been owed by so few to so many. And…with so little real reform.” This pillar of the establishment is now way to the left of the government. He went on to point out that we have now committed a total of “not far short of a £1 trillion, close to two-thirds of the annual output of the entire economy,” in order to prop up the banks.

The government is preparing to privatise Northern Rock, and to withdraw its controlling stake in RBS and substantial holding in Lloyds over time. This is the opposite of what they should have done. The banks failed, and in failing destroyed the livelihoods of millions of workers. The Labour government should have implemented the socialist nationalisation of the entire financial sector.

This would have been the right thing to do, but it would have sent alarm bells out to the rest of big business, who New Labour are ever anxious to grovel to. So what have they done instead? They have just given Northern Rock £8bn of our money and now propose to put £33.5bn more into RBS and £5.7bn into Lloyds.

Let’s take Northern Rock first. Famous for financial recklessness and 125% mortgages, the privately owned Rock was driven into the ground by executive greed and taken into public ownership in the face of inevitable collapse in February 2008. Darling’s plan is to divide the Rock into a ‘good’ bank with all the safe loans on its books, and a ‘bad’ bank with all the toxic stuff in its portfolio. The good bank will be privatised, sold for a song, while we taxpayers will get lumbered with the bad bank and its rotten debts.

Then there’s RBS. The bank would not exist without the government’s bailout last year. It’s still in intensive care, and we pay the ‘hospital bills,’ called the Government Asset Protection Scheme (GAPS). Now Darling is pumping billions more of our money in as a transfusion. That’s very generous of him. Since nobody else wants to put money into RBS the government share in the bank has gone up from 70% to 84%.

Lloyds is the most disgraceful case of all. Darling has allowed the bank to make a rights issue of shares, that is to give the option to existing shareholders to buy more bank shares Since it’s not in such a plight as RBS, the government now ‘only’ owns 43% of the shares, despite the latest handout. This means that Lloyds escapes from the GAPS that, at least in principle, gives the government some sort of control over the level of bonuses they pay out and the extent of lending they make. Now they can really party! We know from the headlines that bonuses are back. Dan Roberts (Guardian 30.10.09) explains that Lloyds’ behaviour is, “Like taking out house insurance during a fire, refusing to pay for it once the fire is out and sending the insurance company a bill for a new sprinkler system.” And can anyone doubt that, should Lloyds screw up again, New Labour would be on hand to throw still more of our money at the bank?

Still, the banks have decided at last to economise – at the expense of their workforce, Lloyds will try to cut 5,000 jobs, while RBS proposes to lay off 3,700 workers. This is another way workers pay for the bosses’ crisis. What a disgrace that New Labour just sits twiddling their fingers and lets the banks get away with it.

The government’s figleaf for this massive surrender of our money to the banks is an agreement with the financial institutionss to curb bonuses for the time being. We agree with Vince Cable who asked, “Why is it a great discipline and hardship to ask bankers to wait three years for their next Ferrari?”

The ultimate aim of the government and the EU is ‘to increase competition.’ Competition among banks has always been a farce. As Trotsky explains in the Transitional Programme , “The banks concentrate in their hands the actual command over the economy. In their structure the banks express in a concentrated form the entire structure of modern capital: they combine tendencies of monopoly with tendencies of anarchy.”

As Phillip Inman explains about the plan (Guardian 02.11.09), “A rebranded high street with several new banks will be difficult to achieve without taxpayers losing billions of pounds.” But what’s a few billion more quid to Brown and Darling? After all, it’s not their money.

Lloyds management are celebrating the escape from the embrace of GAPS as ‘independence day.’ Taxpayers, ordinary working class people, are regarded as mugs who save the banks’ sorry livelihoods and are then expected to shovel ever more money into the maw of the rich and the private sector. Let’s not put up with this any longer. The case for socialist nationalisation of the banks is overwhelming.