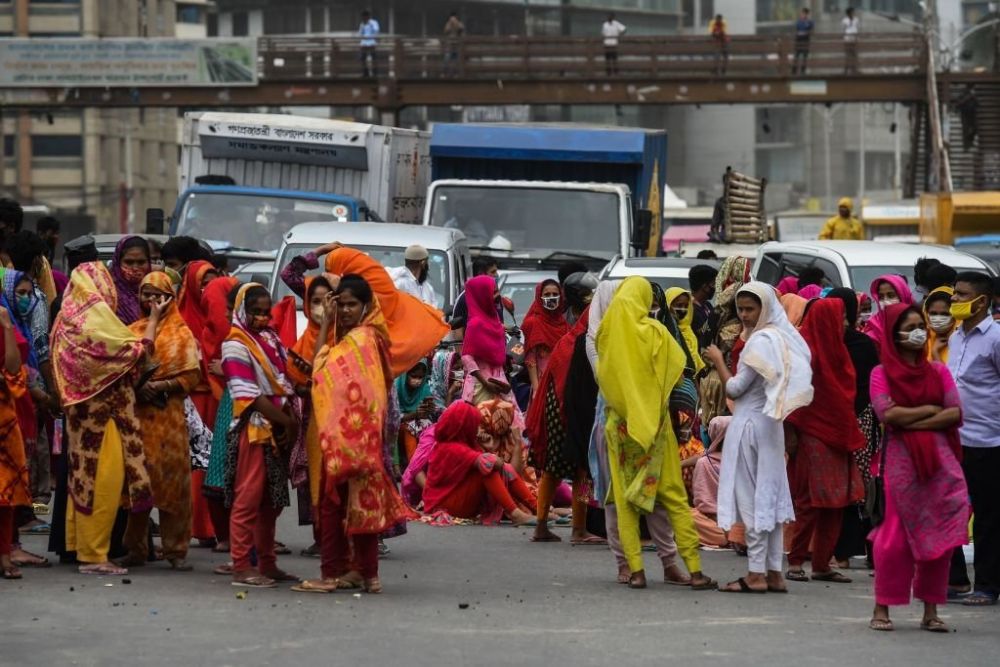 In the last week, over 20,000 workers took to the streets of Bangladesh to demand their wages after clothes factories stopped paying their staff due to a lack of orders. With the global coronavirus pandemic causing fashion retailers such as H&M, Walmart and Tesco to cancel their orders, many workers in Bangladeshi factories have gone up to two months without receiving any income. Now, in defiance of the nationwide lockdown, workers have organised massive protests demanding their money and risking infection to fight the bosses.

With over 80 percent of the country’s exports coming from the garment industry, the global lockdown has accelerated the major crisis in the Bangladeshi economy. Naturally, the bosses have sought to offload the burden of this onto the workers, refusing to pay wages and expecting the workers to get by until the lockdown ends. This has led to an explosion of class-consciousness among workers in Bangladesh, with protesters defying the government’s restrictions to organise huge protests. Slogans such as “we want our wages” and “break the black hands of the owners” show that workers know exactly where to place the blame for the current crisis. The expressions of anger have so far taken the form of mass demonstrations, with some workers breaking down doors and windows in factories. It is clear that the withholding of wages has become a catalyst for the previously suppressed anger of a wide layer of factory workers in the country.

The risk posed by coronavirus in the current period shows both the incredible courage and the extreme insecurity of the masses in Bangladesh. Sajedul Islam, a 21-year-old factory worker told reporters: “We don’t have any choice. We are starving. If we stay at home, we may save ourselves from the virus. But who will save us from starvation?” Similarly, another worker said: “If we don’t have food in our stomach, what’s the use of observing this lockdown?” Class-consciousness has firmly cut across the masses’ fear of the current pandemic. With living conditions becoming increasingly dire, workers have been left little choice but to risk their lives in order to fight the greed and exploitation of the bosses. With the Bangladeshi government having extended the lockdown at least until 25 April, it seems unlikely that this struggle will end soon.

Indeed, protests against low wages and poor working conditions in clothing factories in Bangladesh are nothing new. Workers there have engaged in waves of protests for over 10 years against their systematic exploitation by the bosses. Furthermore, the vast majority of workers in the Bangladeshi clothing industry are women, who are further exploited and underpaid due to their oppressed role in society. These facts are conveniently forgotten by European and American clothing monopolies, who ignore the terrible working conditions and lack of workers’ rights in order to push down the cost of production. The recent refusal of the bosses to pay workers’ wages, therefore, has only added fuel to the fire. The anger that has led to the current protests, though it has erupted in response to the specific pressures of the global pandemic, has been developing under the surface for years.

In response to the movement of workers, loans amounting to $590 million have been announced to fund factories’ payment of workers’ wages. While this may go some way to alleviating the widespread hunger, it is evident these measures have not come out of the generosity of the ruling class. It must be remembered that the ruling class gives nothing to the workers for free. Undoubtedly this money will eventually have to be repaid, either through greater austerity or through wage cuts after the lockdown ends. The Bangladeshi government clearly intends to use these loans to calm the masses until the factories reopen, only to then demand the workers pay back the money that they so selfishly demanded to stay alive.

Indeed, that government support for unpaid workers has come only after the growth of a mass movement in one of the country’s most important industries, clearly demonstrates the bosses’ fear of escalating class struggle in the current period. The Bangladeshi ruling class were perfectly happy for workers to go two months without any financial support, yet when tensions boil over, they were quick to seek to pacify the masses at any cost. Bangladesh is the world’s second largest clothing producer, with the garment industry netting the country over $35 billion a year. The interests of the government could not be more obvious, with maintaining future profits placed above the basic needs of the working class.

Ultimately, this struggle is yet another demonstration that capitalism is not prepared to handle a crisis of this scale. The inability of the economy to provide for these workers shows the need for widespread nationalisation and planning of industry, so that workers can be provided for, and stopping non-essential production does not mean absolute financial insecurity for the majority of people. What is being shown in Bangladesh, as in many countries around the world is that, in times of social and economic crisis, it is workers who bear the brunt of crises. Any concessions won by the courageous movement currently taking place will be taken back without hesitation once the lockdown is lifted. What has become clear in the case of factory workers in Bangladesh is that while a disease does not discriminate between victims, the ruling class does. The struggle for decent living standards and healthcare in a period of global pandemic is a class struggle that must continue beyond the end of the current lockdown.