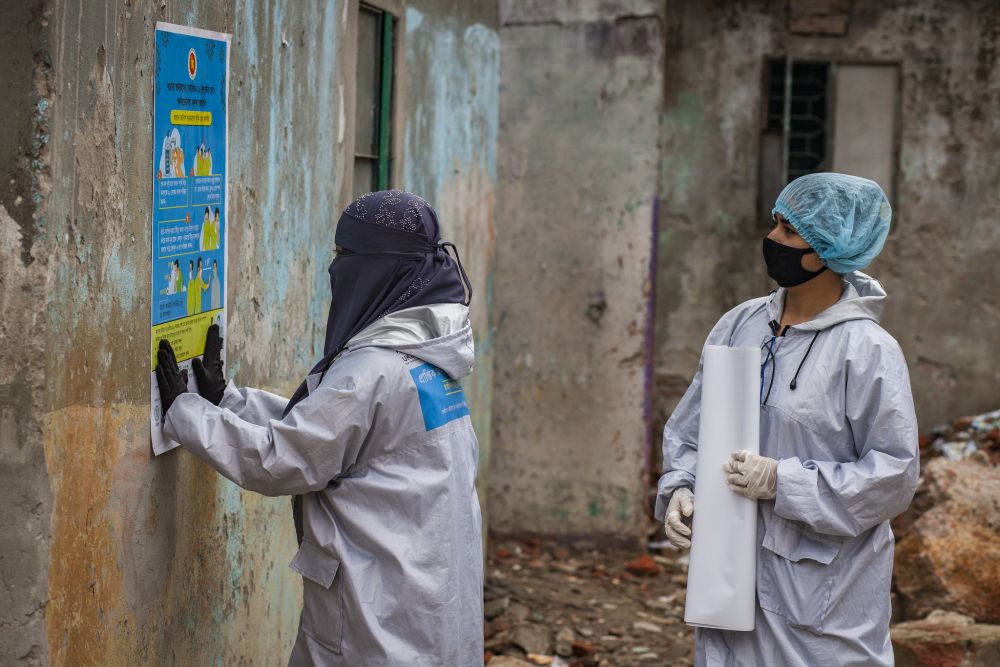 The workers and poor of Bangladesh are crushed between the COVID-19 pandemic and a severe economic crisis, while the government throws money at big business and wades in a swamp of corruption. For millions of people, winning a better society is a matter of life or death.

2020 marks an important year for Bangladesh. It has been named as Mujib Year, when the country will celebrate its 49th year of freedom from colonial rule, alongside the 100th birthday celebration of the ‘father of the nation’, Sheikh Mujibur Rahman. The government had planned a lavish programme of celebratory events to mark the occasion.

The Awami League has been the ruling party in Bangladesh since 2008. Its manifesto at that time promised to achieve ‘Vision 2021’: a programme of democratic, economic and infrastructural reforms to mark the golden jubilee of the nation. Amidst an ongoing global crisis of capitalism, Bangladesh has experienced economic growth in the past 12 years. But only the bourgeois have benefitted, while the working class and poor remain in a state of constant misery.

This was the situation in Bangladesh before the pandemic. As soon as it began, hundreds of expatriates started to flood back from badly affected countries, bringing the disease with them. On 8 March, just before the birthday of Sheikh Mujib on 17 March, the first three coronavirus cases in the country were confirmed, including two men returning from Italy and a relative. 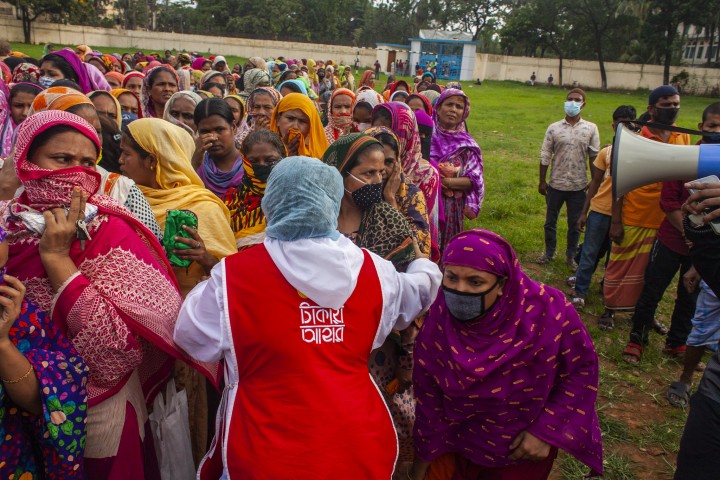 The Institute of Epidemiology Disease Control and Research (IEDCR), a body under the Ministry of Health, recommended that citizens avoid mass public gatherings. But the government still went ahead with two major public events in the capital Dhaka on Sheikh Mijibur Rahman’s centenary. These events were supposedly scaled down, but even so they were packed with thousands of revellers. The very next day, on 18 March, Bangladesh reported its first coronavirus death. The same day, tens of thousands of people gathered in Raipur in the southern district of Lakshmipur to recite “healing verses” from the Quran. This event was organised by an influential local religious leader who urged people to join, promising it would make them “free from the coronavirus.”

That week, school holidays were announced to support the quarantine. On 20 March, the Islamic Foundation allowed congregational prayers to go ahead, albeit for a shortened length. The government imposed “general holiday” (i.e. a lockdown) on 26 March, set to last until 4 April. On 9 April, Bangladesh imposed a “complete lockdown” of Cox's Bazar District, where the majority of the Rohingya refugee camps are located.

By the end of March, Bangladesh had reported 51 confirmed cases and five deaths. The “general holiday” was extended multiple times, and eventually pushed to 30 May. There were 1,000 confirmed cases by 14 April, with 100 deaths by 20 April. On 27 May, Prime Minister Sheikh Hasina said there would be no further lockdowns, as “Economic activities must be resumed for the sake of the lives and livelihoods of people… it is not possible to restrict people's source of income for an indefinite period. And it is not at all possible for a developing country like Bangladesh.” As a result, by 18 June, the number of confirmed cases crossed 200,000.

To make matters worse, Bangladesh is one of the most vulnerable countries to climate change, and has been hit by a higher-than-usual frequency of flooding, cyclones and typhoons. Floods typically hit Bangladesh at the period of June-August, which was also the peak of infections from COVID-19. This has compounded one nightmare upon another, as millions of people in flood-affected areas faced shortages of food, drinking water and toilet facilities, not to mention the transmission of water-bourne diseases.

Ministry of Health (or Death)

According to Johns Hopkins University, in terms of tackling the outbreak of disease, Bangladesh ranks lowest among South Asian countries in the 2019 Global Health Security Index. This is due to a combination of factors, including corruption and mismanagement and a lack of investment in health infrastructure.

In short, COVID-19 in Bangladesh was a disaster waiting to happen. The government did take some measures, like setting up thermal scanners, screening facilities in airports, tracking passengers' movements, demanding self-isolation for 14 days on arrival, and offering free testing facilities and follow-ups. The IEDCR claimed that it took necessary preparations for setting up thermal scanners at all land ports and isolation units at public hospitals of all districts in order to halt the deadly coronavirus. But these measures were inadequate, and could not account for the limitations of the healthcare system in Bangladesh, which discriminates against the poor.

The situation was worsened by corruption. A scandal came to light involving two hospitals owned by the chairman of the Regent Group of property developers, Shahed Malik. The hospitals were supposed to provide free tests, using government issued kits. Instead, they charged Tk 3,500 per test, threw away the samples and issued fake results. Malik tried to flee the country but was arrested at the bank of a border river with India, wearing a burqa.

The Health Minister of Bangladesh unconvincingly denied he knew anything about this scandal. And afterwards, under pressure from Bangladesh Private Medical College Association, the Health Ministry ordered the Public Security Division to stop raids on private hospitals to expose similar acts of corruption, arguing that they interrupt routine work. More and more cases of corruption have also arisen around the World Bank-funded emergency COVID-19 project. No measures have been taken against this except for the removal of the project director.

Despite COVID-19 exposing the country’s “muddled, weak and corrupt health system” (quoting said World Health Organisation former regional adviser Muzaherul Huq) the budget for the coming fiscal year includes no additional investment in the health sector to deal with the pandemic. Instead, politicians have started making bizarre comments about the coronavirus “leaving Bangladesh by itself”(!)

Within one week of the coronavirus hitting Bangladesh, all schools, colleges and universities were shut down and exams suspended. University dormitories were closed and students went home. The UGC (University Grant Commission) and Ministry of Education ordered every private and public educational institution to start online classes. However, this decision was made without any preparation, which predictably caused chaos.

Furthermore, many students here in Bangladesh lack resources like smartphones, laptops and even an internet connection to participate in classes. A private survey of 204 top-tier private university students who attended online classes during the lockdown was published in a prominent daily newspaper. It found that only a third are currently living outside Dhaka, and a mere 12 percent live in rural areas. Online classes are not perfect substitutes for in-person lectures and 58 percent of respondents report a lower grade expectation. This has added additional stress to the innumerable uncertainties students face during this pandemic.

Under the pressure of students’ rising frustration, which has been widely reported in the Bangladeshi media, the government promised to provide “loans” to students who do not have the resources to join online classes. But what is the point after online classes have already been held for the past six months?

Economic crisis and attacks on workers 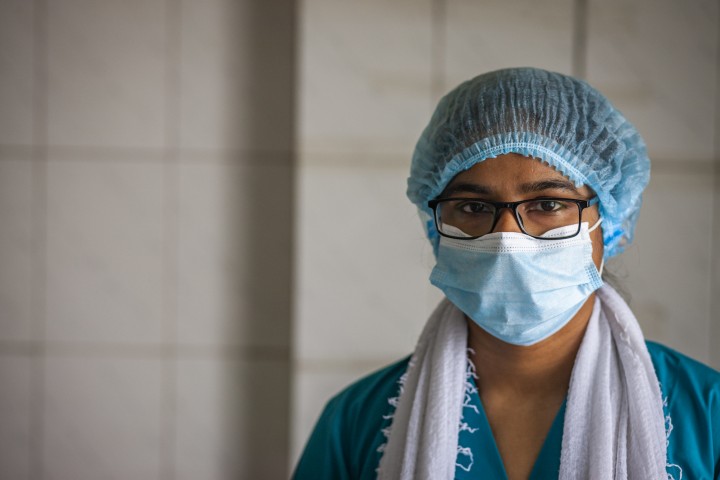 The government is throwing money at the big corporations (much of which is swallowed up by corruption) to save the economy, while the workers are left with disease and poverty / Image: UN Women, Flickr

The government’s optimism about defying the global trend of economic decline was shattered by the COVID-19 pandemic. The predicted GDP growth of 8.2 percent for 2020 may be reduced by 2 or 3 percent. According to current official calculations (before COVID-19), the poverty rate was set to remain at 20 percent in 2020, with almost 32 million living in poverty. According to the South Asian Network on Economic Modeling (SANEM), it may now double to 40.9 percent.

The government proposed a series of measures to buttress against the impact of the pandemic, with the support of the private sector and NGOs, which mostly involved doling out huge bailouts to big business. Hasina has announced bailout/stimulus packages and loans to support industry, small-and-medium-sized businesses and the service sector, totalling trillions of taka.

The government also said it will also widen the social safety net to address the basic needs of people living below the poverty line, including workers in the informal sector, daily labourers and the elderly; and free housing has been promised for homeless people. But there is no clear indication about the amount of resources allocated for these activities. It seems like the major responsibility will be on the commercial banks, who will demand a return on these loans, with interest.

Even with all this cash being thrown at the pandemic, it’s not enough. According to the IMF, exports fell 25.99 percent short of their annual target. Many small businesses are set to collapse. According to the World Bank, remittance income (a major factor in the Bangladesh economy) faces a 22 percent fall compared to last year.

The economic crisis has harshly impacted the workers and poor. Three out of five people in the country (100.22 million) are at high risk of economic and health vulnerabilities. A survey found that 73 percent of poor families in northwest Bangladesh face severe food-related distress as a result of inadequate income during the coronavirus pandemic. 53 percent of these families are maintaining their living standards by borrowing money from relatives, neighbours and microfinance agencies. Some of them are also taking money as advance wages from potential future employers, which will cause them to lose income during peak employment time. 37 percent of the families interviewed were forced to sell whatever small assets they had left in order to buy food.

In the capital, prices of essentials have increased due to disrupted supply chains resulting from the pandemic and flooding. Many urban workers were forced to leave for their home towns in rural areas due to a lack of work. To prevent the spread of the virus, the government has banned people from sleeping or living on streets, dispurging millions of people without taking any steps to protect or rehome them. Moreover, Dhaka is home to hundreds of thousands of street children, who lack awareness of hygiene practices. Even those living in orphanages lack access to hygiene products and basic medical services, and are beyond the purview of government monitoring during this health crisis.

There are other vulnerable communities like the Hizras (a subgroup of people who identify as neither men or women) and sex workers, whose already difficult lives have been made even worse by the COVID-19 pandemic. Bangladesh is also experiencing a rise of domestic violence towards women, exacerbated by the lockdown, and about which the government has done virtually nothing.

As for rural areas, during the 45-day lockdown period, farmers faced losses worth Tk 565.36bn ($6.66 billion USD). 63 percent of agricultural workers had less than 30 days of work during Boro harvesting time this year. The situation facing indigenous people in the northwest is even worse, as they are averse to migrating to faraway places for work.

So on the one hand, the government is announcing billions in stimulus packages and bailouts, while on the other hand we are watching a declining economy and rising poverty rates. We can see the two-facedness of the government in the example of the textile mill industry. Even amid the pandemic, the government decided to shut all state-run jute mills and lay off 25,000 workers. In response, hundreds of mill workers took to the streets in Dhaka, Khulna and Chattogram in protest, alongside their families. This must be a harbinger of battles to come.

This is the situation facing Bangladesh during the COVID-19 crisis. The government is throwing money at the big corporations (much of which is swallowed up by corruption) to save the economy, while the workers are left with disease and poverty. And of course, these loans will not be paid back by the capitalists, but by the working class. In order to win a decent existence for themselves, the workers, youth and poor of Bangladesh must rise up against this rotten system and establish a planned economy under a socialist society.