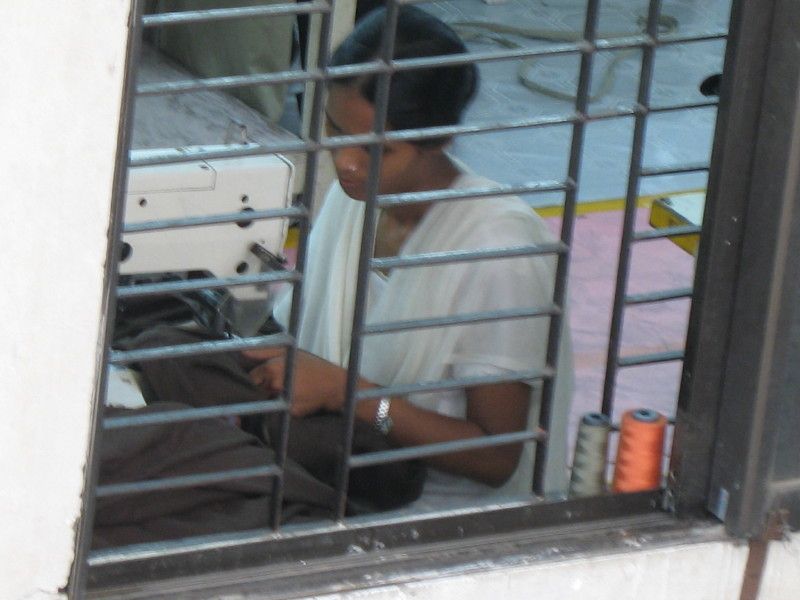 The present crisis of capitalism is creating appalling conditions for workers in countries like Bangladesh. What happened recently in the textile industry is symptomatic. After months of not receiving any wages, workers have gone on the warpath, and in desperation have taken extreme measures.

In Bangladesh textile exports are one of the most affected industries. The situation is getting worse with every passing day of the economic recession. All measures, including direct state aid, seem to be in vain. Unable to manage affairs, the capitalists and their governments are resorting to open violence and repression. The consequences are most explosive.

Workers in several such industries where salaries have not been paid for months on end, had joined in peaceful protests, demanding their due wages. While the agitation was going on, the capitalists and the government had colluded to drench the protest in blood and suppress it by use of brute force. The peaceful demonstration was fired upon by the police and private guards, leaving at least two dead and dozens injured on June 27 and 28.

Following on from this, the protests of workers on 29 June, however, turned violent, in resistance to the police which had once again tried to use force to disperse them. Five factories and two warehouses were torched and over 100 people were injured in clashes between protesters and police as garment factory workers continued violent demonstrations at Ashulia on the outskirts of Dhaka for the third straight day on Monday.

About 20,000 workers, some armed with sticks and stones, were protesting on the streets of Ashulia, 30 kilometres outside Dhaka, when some set fire to factories. Angry workers also set seven vehicles on fire during the clashes in which a number of journalists and policemen were also injured.

More than twenty thousand garment factory workers took to the streets at around 8:30am and blocked the Tongi-Ashulia road and Dhaka-Tangail highway protesting at the killing of two fellow workers in police shootings on Saturday and Sunday.

Witnesses said a committee led by leaders of the Bangladesh Garments Manufacturers and Exporters Association came to visit the troubled Suhi Industrial Park in an ambulance at around 9:30am. The workers took to the streets to protest against their visit. As rumours spread that the BGMEA team had taken away four bodies of workers who were believed to have been killed in Saturday’s police shooting, the workers decided to set up a blockade.

Under pressure from the workers, the management of 50 garment factories located at Jamgora, Narasinghapur, Zirabo and Baipail on the Ashulia-Tongi road announced a general holiday on Sunday following the killing of knitting operator Al Amin, 20, of Suhi Industrial Park in the Ansar’s shooting on Saturday.

The workers held a massive rally in front of the ‘Fantasy Kingdom’ and organised a demonstration. Large contingents of police, Rapid Action Battalion and Armed Police Battalion deployed on the scene repeatedly asked the workers to withdraw the blockade, but the workers divided into small groups and marched towards the nearby factories where production continued. These factories had continued production in defiance of the call of the strike committee of the workers, to keep the factories closed on Sunday in protest against the killing.

Police fired teargas canisters and 100 rounds of rubber bullets in front of the DEPZ leaving at least 100 workers injured, after the workers tried to march in a procession towards the Dhaka Export Processing Zone.

Meanwhile, the workers became enraged at the news that the Hamim Group, one of the biggest exporters, which was responsible for firing upon the workers, was defiantly continuing operation of their factories. The workers split into small groups and stormed five factories of the Hamim Group at around 10:15am, sprinkled its main building, which houses five factories, with petrol and set it on fire. The workers also torched three buses, two pickup vans, two microbuses and one motorbike parked inside the factory. The private guards, who tried to resist the workers, were also beaten up.

After the incident the workers put up a blockade on the road blocking the way to fire-fighting vehicles which went to the scene to put out the flames. The fire services managed to douse the flames only at around 3.30 pm.

Meanwhile, a survey by the government's Factory Inspection Department released Monday found that 122 of 825 factories surveyed, almost 15 percent of the total, had not paid their workers their salaries in time between January and June. Another 53 had not paid overtime and eight factories paid less than the government's minimum wage of 1662.50 taka (24 dollars) per month.

The garment industry accounts for about 80 percent of Bangladesh's export trade and around 40 percent of its total industrial workforce.

“The situation is particularly appalling in the sweater factories where we have seen frequent violent unrest over wage cuts and irregular payments," admitted a senior official of the labour department, on condition of anonymity.

In a country like Bangladesh, where almost half the population is already living below the poverty line, wages have been cut by 20 to 30 percent in recent months.

Factories in this South Asian country have been hit hard by the global economic crisis with several reportedly cutting wages to compete for orders with countries such as Vietnam, China and India.

While the governments in South Asia and other backward regions, are fooling their working people through false assurances that their countries would remain insulated against global meltdown, the fact remains that these countries are the worst hit, as over a period of time they have been carrying on their backs not only their own burden but also the one shifted onto their shoulders by the advanced capitalist countries. The consequences of economic depression are more devastating in the backward countries, where the working classes and toiling peasantry is already pushed to the extremes of poverty and deprivation.

This is the real effect of the present world crisis of capitalism on workers in countries like Bangladesh. Normally peaceful workers are being pushed to the extreme, and are prepared to adopt extreme measures. It is an indication of the period we have entered globally.