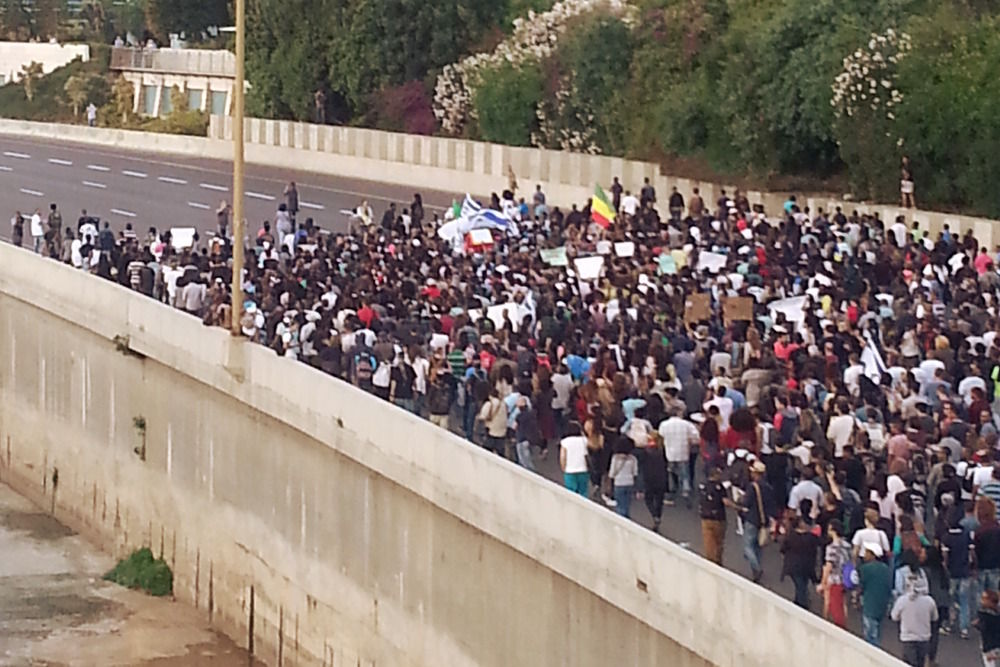 In scenes reminiscent of the huge #blacklivesmatter protests in Baltimore, thousands of Ethiopian Jews have taken to the streets of Tel Aviv and Haifa to protest against the brutal treatment regularly meted out by the police against their community. At the end of April, a shocking video emerged which appeared to show two Israeli police officers savagely beating Ethiopian soldier Damas Fekade in an unprovoked attack.

This outrage is the latest in a long string of violent provocations against this poor, marginalised community. In July last year, 22-year old Yosef Salamse was found dead, apparently due to suicide, some months after being arrested and brutally beaten by police. He has been dubbed the Israeli Michael Brown, after the young black man who was gunned down by police in Ferguson.

Indeed, Israel’s Ethiopian population has much to be angry about. As well as making up a third of the juvenile prison population (despite making up only 2% of the general population), Ethiopian Israelis are far more likely to be stopped-and-searched by the police than the general population, and are one of the most impoverished sections of Jewish Israeli society. In 2013, it was revealed that the Israeli state was even injecting Ethiopian Israeli women with birth control medication either by force or without their knowledge.

On 3 May, as a reaction to the video showing the beating of the young man, a demonstration of several thousand Ethiopian Israelis took place in Tel Aviv. During the day, demonstrators blocked a busy road, marching with their hands in the air to signify handcuffs. As evening fell, the mood became more angry, and demonstrators tried to storm the municipality building. In scenes reminiscent of the first Palestinian Intifada, stone-throwing protesters were beaten back by riot police firing tear gas and stun grenades.

The militancy of the demonstrators was clear. As one demonstrator explained to Israeli TV station Channel 10:

"Our parents were humiliated for years.

"We are not prepared to wait any longer to be recognised as equal citizens. It may take a few months, but it will happen."

The protests didn’t stay confined to Tel Aviv for long. On 13 May, several hundred Ethiopian Israelis marched in the northern city of Haifa. And the mood in the community is to continue the struggle. In a press conference in Tel Aviv, leading activist Inbar Bugale promised the protests would continue if their demands were not met.

“The prime minister… [should] step out of his ivory tower at the Prime Minister’s Office and tour our neighbourhoods, those places that over the years the government has made sure would remain Ethiopian ghettos,” she said, adding that “decision makers abandoned Ethiopian Israelis as though they were foreign implants and not a basic part of the foundation of Israeli society. They have ignored the difficult reality that there is an entire young generation that feels it is not part of Israeli society.”

History of Ethiopians in Israel

There have been Jews in Ethiopia for many hundreds of years and they have have an ancient tradition going back centuries.

When the modern State of Israel was established in 1948, Ethiopian Jews were excluded from making aliyah there under the Law of Return, as the rabbinic authorities didn’t consider them to be Jewish. That all changed in 1975, when the community of Beta Israel was officially recognised as Jewish from the point-of-view of immigration to Israel. Against a backdrop of poverty, famine and increasing antisemitism in Ethiopia, Israel, the US and the Ethiopian authorities secretly colluded to air-lift Ethiopia’s Jews and take them to Israel, the most prominent operations being Operation Moses (1984) and Operation Solomon (1991). Thousands of Ethiopian Jews died in camps in neighbouring Sudan or around Addis Ababa, while waiting for being transferred, and when they finally did reach the promised land, their problems were only just beginning. Immediately, the chief rabbinate insisted that they undergo a symbolic immersion ceremony to ‘confirm’ their Jewishness, an insult that provoked protests at the time.

Why did the Israeli government go to all this effort to bring this impoverished community to Israel? Whilst Israeli capitalists have certainly benefitted from the cheap labour the Ethiopians have provided, the real reason relates to the knotty ‘demographic problem’ - Israel’s need for its Jewish population to outnumber its Arab one. Despite the discrimination they face, the Israeli ruling class calculated that Ethiopian Jews would have served in the IDF in large numbers, and their Jewishness would have made them far more attached to the Zionist dream than Israel’s Arab population, never mind the occupied Palestinians, could ever be. But clearly there is a limit to all things and now this discriminated section of Israeli society is demanding equal rights and conditions.

Response of the state

As it happened in the US after the Baltimore protests, prominent figures from the establishment have been falling over each other to express ‘sympathy’ and ‘understanding’ for the black victims of police brutality.

In Israel, the flood of crocodile tears threatened to turn into a tsunami. Prime Minister Binyamin Netanyahu demanded "we must stand together as one against the phenomenon of racism, to denounce it and eliminate it,” conveniently ignoring his own history of incitement against Israel’s Arab community. President Reuven Rivlin got in on the act, decrying the "open and raw wound" that these protests revealed.

Netanyahu met with Ethiopian community leaders, vowing to tackle the racism and discrimination they face. Given Netanyahu’s government imposed draconian cuts to the budget for integrating Ethiopian immigrants in 2012, we are more than skeptical about his real intentions. As with his empty promises in the wake of the massive social protests in 2011, one suspects his current utterances to be so much hot air. He’s made a career out of expressing grave concern about the problems facing ordinary Israelis, then creating committees to 'deliberate' before kicking them into the long grass. However, words cannot resolve the real problem of discrimination, as well as the problems facing the mass of the working class in Israel.

This latest crisis is one of a number of fault-lines emerging in Israeli society. The world crisis has hit Israel hard, and a regime of permanent austerity has existed for the past decade or more. The oil crisis of the 1970s marked a turning point for Israel, with a failing economy and increasing social problems discrediting the Labour coalition and leading to the election of Menachem Begin's right-wing Likud in 1977. The social contract between big business, the unions and the Jewish working class was ended, and the past 40 years have represented a long-term trend of cuts and attacks on the working class.

The steady decline in living standards of Jewish workers has served to undermine the whole Zionist project. Netanyahu’s government finds itself resting on an ever-more precarious social base, and is reduced to racist demagoguery against its Arab and occupied Palestinian populations, which recently spilled over into a spate of violent attacks against Arabs in Israel. Increasingly a prisoner of Naftali Bennett and his far right Habayit Hayehudi, Netanyahu stumbles from one crisis to the next, desperately triangulating between the different political forces to stay in power. Such is the rottenness of the Israeli ruling class that this is the best political representative they can muster.

The ongoing occupation of the Palestinians must be seen in this context. Whilst there are economic reasons for Israel to want to hang onto the larger settlements in the West Bank, the main reasons are now political - the right can only survive in power by leaning on the far right, and the regime can only retain any popular support by whipping up fear of the ‘Arab threat’. In a society where racism is the stock-and-trade of the ruling class, it is hardly surprising that this exacerbates discrimination against Jewish minorities like the Ethiopians. Mizrahi (Middle-Eastern) Jews have long complained of suffering similar discrimination at the hands of the wealthier Ashkenazi (European) population.

Of course, at the base of this is the class question. Mizrahi Jews were encouraged to emigrate to Palestine (especially after partition in 1948) to provide cheap labour in substitution of the local Arab population, thus satisfying the Zionist need for a Jewish workforce and the capitalist need to exploit cheap labour.

Ethiopian Jews found themselves amongst the poorest in Jewish society, condemned to crime-ridden ghettos, victims of segregation within the school system and condemned to fill up the worst-paid, unskilled jobs, where they can find work at all.

But even the slightly more prosperous in Israeli society are suffering, as the huge social protests in 2011 showed. Ethiopians and Mizrahi or Ashkenazi workers, as well as the Israeli Arabs and Palestinians all have far more in common with each other than any does with the ‘tycoons’ who have enriched themselves at the expense of everyone else.

Coupled with a resurgence of the Arab Revolution, the '99%' in Israel and Palestine can and must unite to transform society, smashing the occupation and ending once and for all the poverty, discrimination and racism that serve only to strengthen the obscenely wealthy capitalist elite’s hold on power.