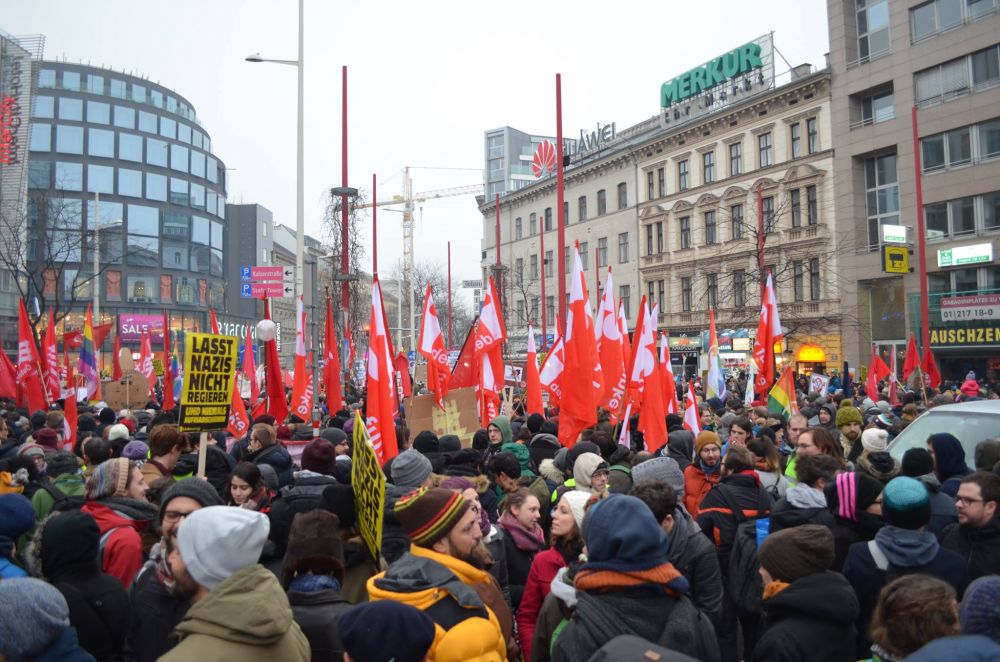 Last Saturday, tens-of-thousands demonstrated against the new Austrian government of the conservative ÖVP and the right-wing nationalist FPÖ in what was called a “new year reception for the new government”.

Big protests had already taken place on the inauguration day of Austria’s new, staunchly conservative government. And the government wasted no time either, immediately placing a series of counter-reforms on its agenda. The first of these will be a counter-reform to workers’ rights and unemployment benefits in style of the ‘Hartz IV’ reform in Germany in the early 2000s, with the aim of forcing unemployed workers to accept any job offered, while working conditions and wages continually worsen. 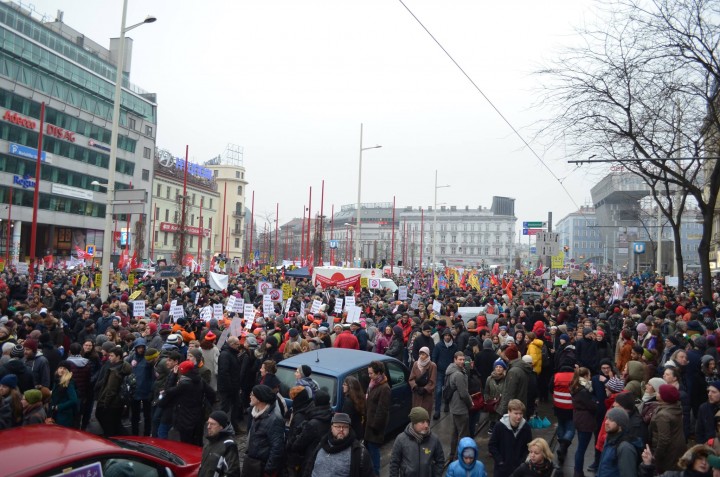 The crowd stretched for two kilometers / Image: own work

This is the plan of the bourgeoisie and its government to prepare Austrian capitalism for the next crisis: to get a ‘competitive edge’ on the international markets at the expense of the working class through cheaper labour costs. To achieve this goal, the government is going all the way. Voted in on a racist program using demagogic attacks against refugees, Muslims and “foreigners unwilling to assimilate” and a rhetoric of “Austrians first”, they now announce their intentions to open up the labour market for non-EU citizens, especially in tourism and the building sector. This is a clear attempt to bring down the wages and working conditions in these sectors, and shows what all the racist demagogy is all about: to divide the working class so that the capitalists can make a hefty profit undisturbed by resistance! 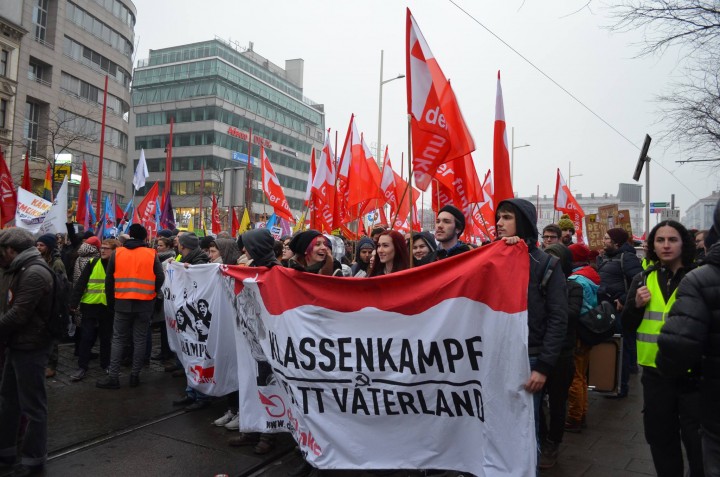 Der Funke comrades distinguished themselves with their revolutionary message / Image: own work

To reassure their base of support and divert attention from these attacks, the FPÖ ministers made a series of racist and provocative statements in the media, like Vice-Chancellor Heinz-Christian Strache wanting to forbid refugees from going out at night; or Minister of the Interior Herbert Kickl speaking about the need to ‘concentrate’ refugees in one place. The minister of social welfare, who is also from the FPÖ, actually flatly denied several times that there would be an attack on unemployed people in the first place before being corrected by other ministers!

It is already apparent after only one month in power that the support for the right-wing FPÖ amongst workers and the unemployed is very shaky. Although this is not showing on the surface for the moment due to the lack of a credible alternative – the reason for the success of the right wing in the first place. On top of that, the prospect of new tuition fees and counter-reforms to the education sector is mobilising a layer of youth against the government. 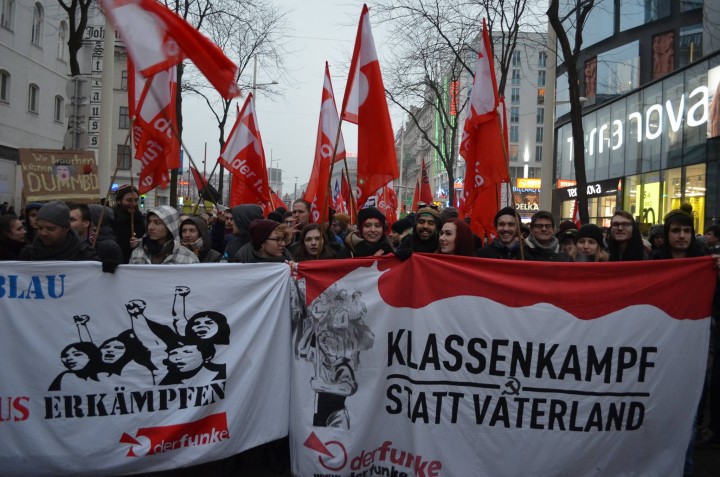 Der Funke's bloc was led by the youth / Image: own work

Under these circumstances the day of the demonstration arrived, called by a left-wing coalition one month ago as a “new year reception for the new government”. After the inauguration protests, the media predicted that “up to 10,000 people” would demonstrate against the government, a scenario the police prepared for. They clearly miscalculated. It is impossible to give an exact number of the people attending the demonstration, partly as many people joined and left the protest throughout the afternoon and evening. The police claimed 20,000, a number the big media outlets eagerly took up. The number given by the organisers was 70,000, which is much closer to reality. When the last demonstrators left from the meeting point, the first ones were almost at the end point, more than two kilometers away!

The mood in the demonstration was very enthusiastic. After a long time of calm in the class struggle and without big mobilisations on the streets it was a clear step forward to have this demonstration, which was probably the biggest in Austria in 15 years. This was achieved without the big working class organisations mobilizing. The union leadership, although criticising the government, is banking on “negotiations” rather than a stand-up fight. The social democratic SPÖ, after being unceremoniously kicked out of the government, is trying to canalize the growing discontent, but in the form of a “loyal opposition” which criticises, but fundamentally accepts, that now the right wing is in charge. 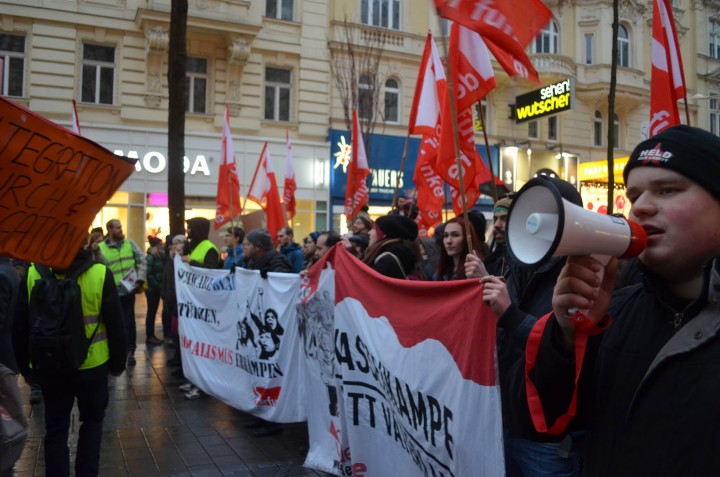 "One solution, revolution!" / Image: own work

Only at the last moment and after it became clear that many more people than expected would come, the regional SP-leadership in Vienna decided to also call for participation. In contrast to that passive approach, many union activists came on their own accord, and also the ‘red youth organisations’ were at the forefront of mobilizing for the demonstration. But the most important aspect of the demonstration was the big participation of unorganized people, in major part youths, with many bringing their own signs and placards to vent their anger against the new government; in reality swamping the organized left as well as the NGOs and the liberal greens, which were also participating. 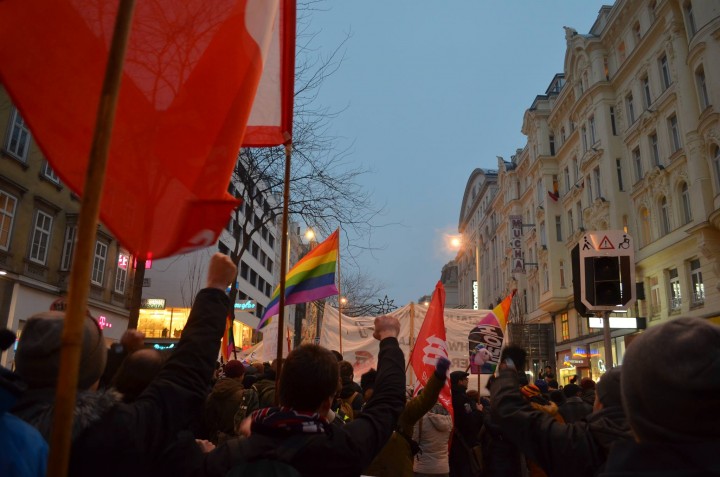 There was a very militant mood / Image: own work

The Marxists of Der Funke also mobilized energetically for the success of this demonstration, especially in front of schools where we had our own flyers. On the demonstration itself we sold about 370 copies of our paper with the headline “Take up the struggle, and no step back”. We also formed our own bloc with the slogan “bring down black-blue [the colours of government], struggle for socialism”, which was very organized, visible and bold. All the way the comrades shouted loudly “Long live international solidarity”, “One solution, revolution”, and many other slogans. Our clear class-based and revolutionary approach attracted quite a few people who joined us the whole way, some showing interest in attending future meetings and joining our tendency. All in all there were about 150 people marching in our bloc. 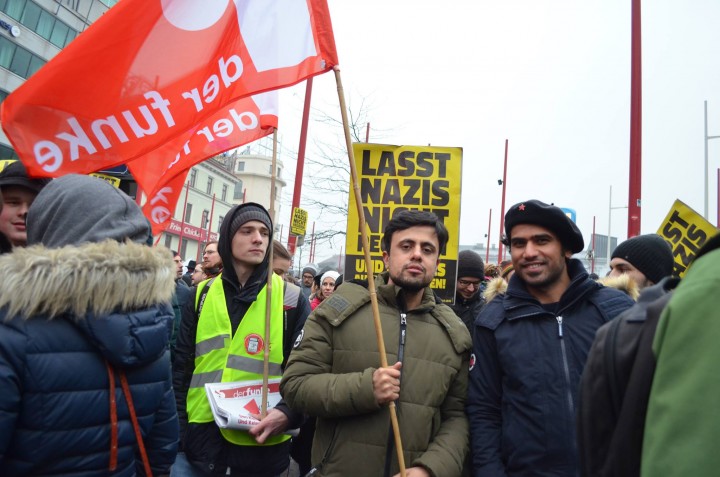 Der Funke comrades at the demo / Image: own work

Austria, after a long lull in the movement, is catching up to the situation in many other countries, where the crisis of capitalism as well as the austerity policies flowing from it is producing a massive reaction from the working class. But as the traditional mass organisations are still stuck in ‘social partnership’ and class collaboration, this process will be drawn out, with many ups-and-downs. But this demonstration was an important success and will surely inspire and serve as a model for future mobilisations. Many left-wing workers and youth for the first time in years could see and feel that they are not isolated. The dynamic is changing. The comrades of the IMT in Austria will use this new situation to energetically fight for the ideas of Marxism, to win over the most radical workers and youth in struggle to the perspectives of a socialist revolution. Join us in this fight! 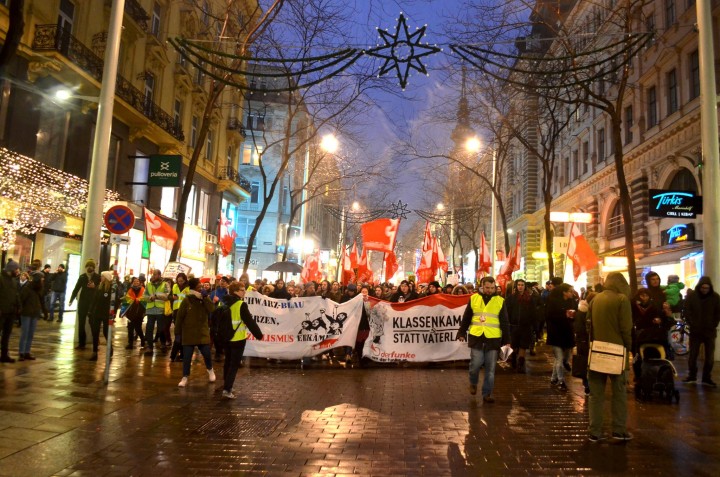 The successful demo will surely lead to future mobilisations / Image: own work