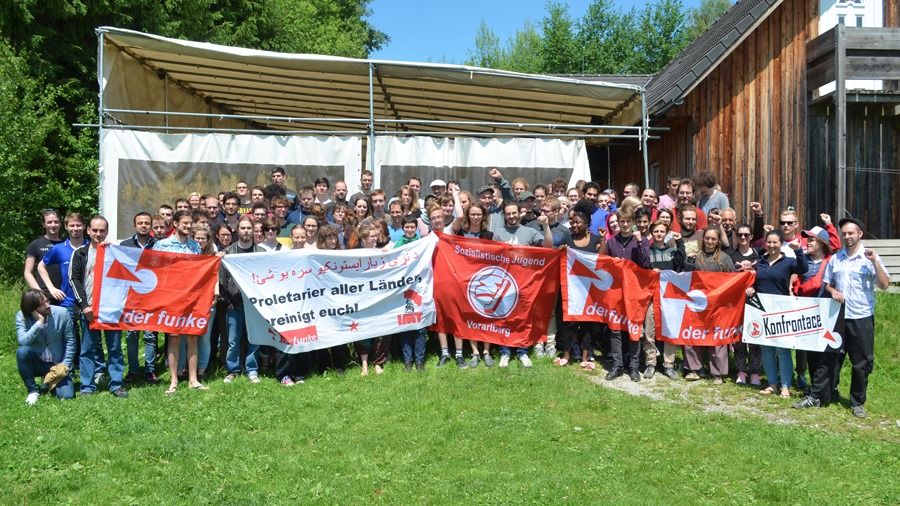 Our comrades held a seminar from 7-10 June in the countryside in upper Austria. The motto of the seminar was: “The Internationale unites the human race – 100-year anniversary of the Communist International”. With 108 guests from Austria, Germany, Switzerland, the Czech Republic, Britain, Bosnia and, for the first time, Hungary, the event was true to this motto, and was the Austrian section’s biggest Pfingstseminar in many years.

Crisis of capitalism and the task of the Marxists

In a plenary meeting on Saturday morning, Francesco from London gave a lead off on the current world situation. He showed how the contradictions of capitalism increase daily on a world scale, expressing themselves in trade conflicts, mass movement and an erosion of all bourgeois institutions. All of these take place against a looming economic crash, and could take an explosive turn. In particular, China is a ticking time bomb, with its precarious economic situation as well as increasing social instability.

In Sudan, we are currently witnessing a revolution, whose daily developments we followed at the seminar. While the Arab Revolution is raising its head again, the contradictions are piling up in Europe as well. Even in Germany, a seemingly unperturbed, stable country, the traditional mass parties are in a deep crisis, while youth movements are on the rise, as comrade Alex explained in his contribution. 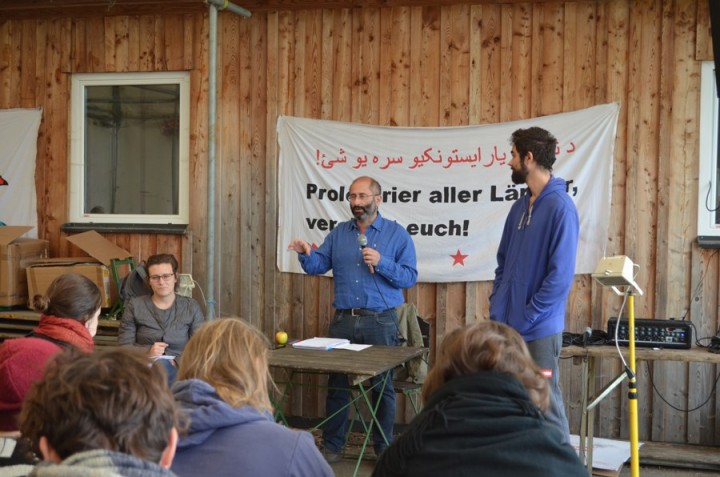 On Saturday morning, Francesco from London delivered a lead off on the current world situation / Image: Der Funke

Comrade Mirko from the Czech Republic described how, in his home country, the situation seems calm on the surface, with economic growth and low unemployment, but the discontent is getting ever stronger under the surface, which led to recent mass protests against corruption.

After an introductory statement by comrade Emanuel about the current situation in Austria, the discussion focused on this as well as the EU. The Austrian capitalists are weakened since the right-wing government was recently brought down – an objectively fortunate situation for the working class. However, just like in the rest of the world, the reformist leadership of the workers’ movement is in crisis. 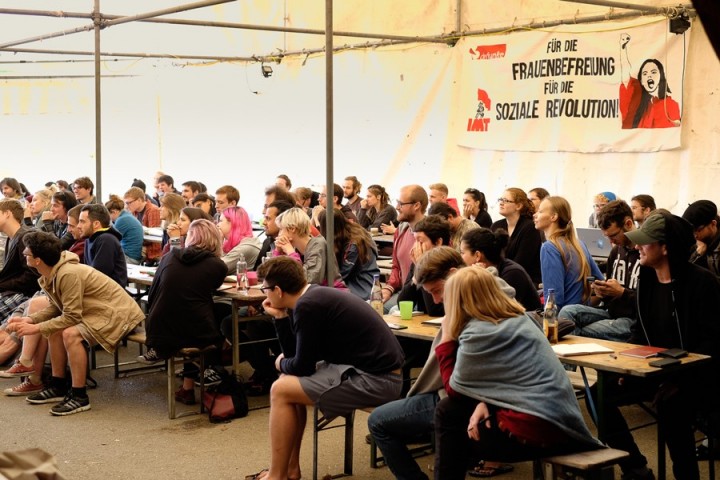 We discussed that the task of the Marxists in this situation is to argue for a counter-offensive of the working class against all the attacks of the former government, such as the 12-hour-working day. The social democratic faction in parliament and the trade union leaders will now have to show what they are made of. They should start a counter-offensive in parliament and society by taking concrete initiatives. If they don’t, they will completely lay bare the uselessness of their organisations and enable a victory of the bourgeoisie in the coming elections. As Marxists, we defend a socialist programme with the demand of expropriation of capital at its core.

The leadership of the working class is the deciding factor in a revolutionary situation, leading a revolution to victory, or defeat. Just like the Communist International before its Stalinist degeneration, we, today, are fighting to build such a revolutionary leadership on a world scale. We face this historic task with optimism and enthusiasm. 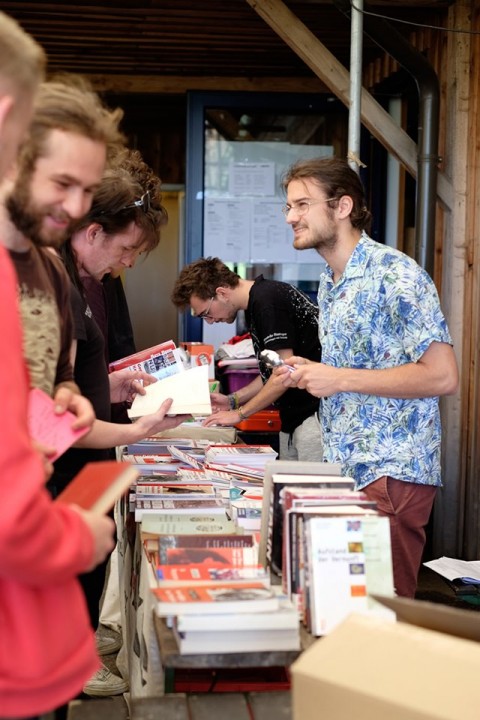 This attitude was present throughout the whole seminar. There were 12 workshops with animated discussions that deepened our understanding of Marxism and will help us in our political activity.

The workshops covered current events (in Sudan, Germany, and the nurses’ struggle in Vienna), historical lessons of the workers’ movement (the Hungarian Soviet Republic 1919, the history of the IMT, the Congress of the Peoples of the East organised by the Communist International in 1920), theoretical debates (Marxist economics, Marxism and Religion, Marxism versus Feminism, and Marx versus Althusser), as well as revolutionary methods and tactics (the United Front tactic; the planned economy and nationalisation).

The thirst for Marxist theory also shown in increased literature sales: 68 books were sold for €681.50, in addition to numerous papers from Austria, Germany, Switzerland, the Czech Republic, the Yugoslav section and the UK.

Preparing for socialism in our lifetime

The smooth running of the seminar was possible because of the solidarity and hard work of the comrades. As every year, we cooked and cleaned ourselves. Besides the organisational tasks, the comrades also participated in our soccer-and frisbee-tournaments, and in the evenings joined our BBQ and workers’ song session. 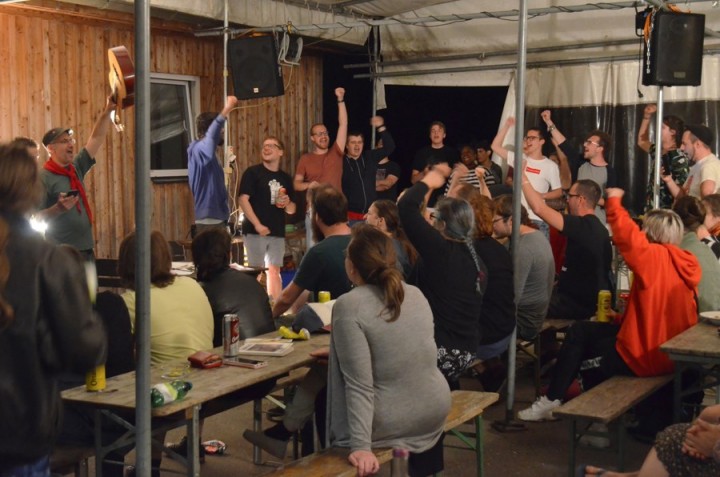 We are fighting to build a revolutionary leadership for the working class on a world scale. We face this historic task with optimism and enthusiasm, which were on full display at the seminar / Image: Der Funke

All of these activities were completely self-financed by our seminar collection campaign and the participation fees, which also guarantees our political independence. Additionally, we kicked off the international summer collection, which will be given in full to the IMT. To professionalise our work, the IMT has the goal to acquire an international editorial office for In Defence of Marxism in London. This we plan to support with at least € 10,000 from Austria in 2019. The seminar was the starting point of the campaign, and 673 Euros were collected.

After this seminar, we will approach the stormy period of this crisis-ridden system with new enthusiasm. We are confident that, with Marxism as our compass, and with our solidarity, we can steer through this storm and build the revolutionary forces of Marxism around the globe.