The May county council elections in Britain this year brought some crumbs of comfort to the Labour Party as it gained more than 260 seats and its share of the vote stood at 29%. Given the dismal record of the Coalition, Labour had hoped for more gains. 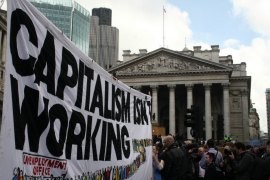 Although many voters turned to Labour, because of the absence of a clear alternative from the leadership, some also turned to UKIP, whose vote share stood at 23%. The biggest losers were the Tories and the Lib Dems. For the first time in county elections none of the three main parties got more than 30%. The lower turnout too reflected a lack of enthusiasm amongst rural or small town voters. The industrial heartlands, the bastion of Labour’s strength, did not have a vote this time.

At a time of austerity and swingeing cuts you would have expected a bigger swing to Labour, but it did not happen. When the writer of these lines asked a regional LP organiser at a Local Government Committee (the former District Labour Party) what programme content we were going to enthuse the electorate with, the reply was that the Tories were switching the street lights off at midnight to cut costs and Labour would promise to keep them on. And this content was to convince voters to turn to Labour!

In other words, as Labour could offer no alternative to cuts and austerity, they would avoid the issue altogether. Such a stance raises important issues as to why Labour has no credible plan to fight the policy of austerity being forced onto the backs of their traditional supporters - working class people. In the same vein the heroic stand against cuts by the three Labour councillors in Hull throws into sharp relief the lack of such a stand by the overwhelming majority of Labour councillors across the land.

Each time that I talk to Labour councillors here in Coventry they always state: I did not come into politics to carry out the dirty work of the Tories. They also claim that if they carry out the cuts, they can protect the most vulnerable; but if they don’t cut, the government will send in a Commissioner who will cut across the board and ignore real need. These actions by many Labour councillors demonstrate once again that the road to hell is paved with good intentions. There is a vast gulf between words and deeds.

This seems puzzling but on closer examination it is the only way for many of them. Why? Labour Councillors seem to have gone through three stages. When the cuts were first announced, they did not believe them. When they then saw the evidence and believed them, they did not understand them or why they were happening. When they understood them, they could see no alternative but to cut.

The material basis for reformism

All of these reactions are a product of the ideology of reformism in the labour movement. What is the material base for this? Over the past 60 years the massive expansion of capitalism on a world scale, an expansion based on post war reconstruction, new markets opening up in former colonies, and the development of new industries, all led to rising living standards for the majority of workers in the so-called advanced countries.

For a whole period capitalism seemed to have overcome the misery of the 1930s and its own contradictions. Home ownership rose and so did access to material goods – cars, TVs, carpets – and access to leisure. Relatively full employment seemed to guarantee endless prosperity. We were living in a new age where the growing fat of the land from an expanding economy allowed reforms to be carried out.

For many councillors it seemed that we could reform capitalism bit by bit as we moved gradually forward towards a new kind of caring, sharing society, between what existed and what was seen as socialism. In 1979 the share of the GDP going to wages was the highest in the post war period at 65%. At a time of plenty it was relatively easy to share out the crumbs.

Today we are in a far worst situation faced with the greatest crisis of capitalism in its history of over 200 years. Yet the same ideology that was born out of the material conditions of the past still holds sway. The belief is there that if cuts are made and the reforms of the past are given up, it will only be a temporary state until the economy had corrected its defaults and then we can once again move to redistributing the crumbs that will come from a growing economy.

This is the illusion produced by the reformism of very sincere councillors. What is not understood is that this crisis is not a temporary one but is the product of the way that the wealth produced by labour in redistributed. It is therefore an organic crisis, rooted deep in the DNA of capitalism itself. It is no accident that today the share of GDP going to wages has declined to 53%. Put it another way. From 1994/5 to 2009/10 the top 1% of earners accounted for 15% of the growth in income from employment and investments. Over the same period the bottom 50% accounted for another 15%. In other words income of the top 1% was 50 times greater over the same period. There was a growing concentration of wealth at the top. This happened all over the world.

What does this mean? The fall in real living standards of the majority of the population and the decline in its relative share of GDP mean that a growing part of the goods and services that are produced cannot be bought. There is a limit to the number of loaves that the rich can eat or the number of cars they can drive. To try and avoid a consequential crisis of overproduction we had the huge expansion of credit to create demand on the “never-never.” Credit expands the market for goods and services but later on the market will contract again as the debt from credit is paid back. The credit boom of the decade leading up to 2007/8 simply made the inevitable collapse far, far worse.

Given the huge private debt that now exists from past borrowing, credit as a means of producing economic growth is ruled out for the moment. So the only other option left to capitalism in order to expand the economy is to increase the share of GDP that goes to labour. However, this will mean that in the private sector a wage increase will result in a profit decrease and the whole trend of the past 30 years has been to increase the share of profits in GDP from 13% to 21%. The capitalists will fight tooth and nail to protect their profits. At a time of crisis the last thing they are is philanthropic. Cutting profits to boost consumption is simply not viable from their point of view. Their responsibility lies in making the most profits possible for the private owners of the means of production, despite Labour leader Ed Miliband’s dream of a “responsible capitalism”.

What does all of this lead to? Clearly capitalism is unable to provide any solution to their crisis. The future under this system will be one of increasing austerity, of lower living standards and of a permanent cut in the amount of social wealth going to local councils. The days of local reforms are well and truly over. The capitalist class wants a greater share of social wealth and that can only come about by cutting the share that goes to labour directly in the form of wages or indirectly in the form of services.

So to cut and wait for the good old days to return means to continue to be a prisoner of the ideology of reformism no matter how well intentioned local councillors are. And they are all well intentioned and for the most part solid working class people. Unfortunately, the roots of reformism have sunk deep and that is why most councillors see no alternative to cuts. These ideas are the product of an economic and social reality that is now long gone; but political consciousness has a nasty habit of lagging behind events!

Let us be under no illusions. The cuts so far have had a devastating impact on the livelihoods of working class people, but they have not resulted in government debt being cut either (as a percentage of GDP). According to the Financial Times of June 9th, debt now stands at £1.2trn and is on track to hit 90% of GDP. The outcome of this is that austerity, or cuts in the living standards of working class people, will last until 2020 at least. This fiscal crisis of government debt was triggered by the financial crisis in the banks but it is workers who will continue to pay the price for the crisis unless the leaders of the labour movement stand up and fight.

It is for all of these reasons that we who wish to defend and enhance the gains made by labour over the past 60 years also have no alternative but to fight for a socialist solution to the crisis. Only when we own and control the wealth that we create, will we be able to decide how that wealth is to be distributed and therefore how much can be spent on local services, on pensions, on higher wages, on building homes, schools and hospitals. There is no other solution.

Source: Austerity: the only road under capitalism