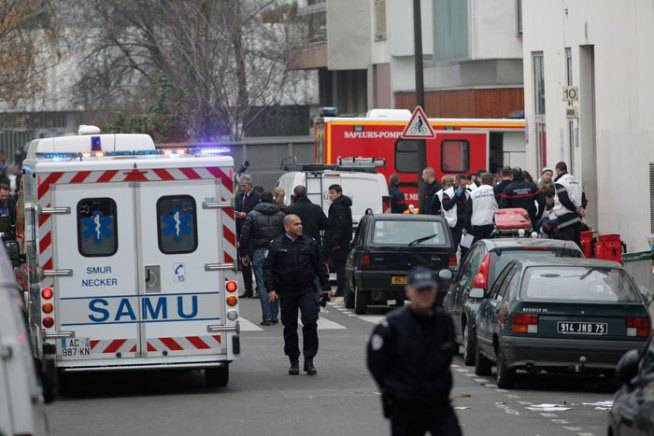 The terrorist attack against the French satirical weekly Charlie Hebdo has caused a huge wave of anger and indignation throughout the country. In the evening after the attack over a hundred thousand people took to the streets of many cities. The revulsion aroused amongst the masses by this brutal terrorist act has been exacerbated by the fact that many of the victims were very popular and held in high regard.

The left parties and trade unions have all called for demonstrations. The freedom of expression is the main focal point of the slogans and discussions. The government, the right-wing and the right-wing nationalist party, Front National,  have taken up this slogan and are using it opportunistically to "defend" a freedom over which they trample the rest of the time. They have no problem with the continuous stream of pro-capitalist, imperialist and racist propaganda which is churned out by the overwhelming majority of the mainstream media. Since Marine Le Pen, the leader of the Front National, and her cronies started flooding the radio and television studios, the FN has been complaining much less about the lack of freedom of expression in France: as far as that party is concerned all is well in the media world,the bourgeois masters of which are Bouygues, Lagardère, Dassault and Bolloré. 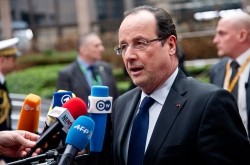 "Socialist" president, Francois HollandeThe blatant hypocrisy of the position of the bourgeois should put the labour movement on its guard. The ruling class and the "Socialist" government will take advantage of this attack and the emotion it has aroused in order to distract the workers from the crisis of capitalism and its disastrous social consequences. They will also use it to deflect attention from all the reactionary measures that the government has been carrying out in the interest a handful of big capitalists - including those mentioned above. This is the meaning behind the many calls for "national unity" by all the above forces. Such an idea must be firmly rejected by the left-wing organisations of workers and youth.

"We are at war," repeated politicians and journalists yesterday. Yes, but if any "war" is underway in this country, it is the one led by the bosses and the government against the democratic rights, working conditions, living standards and previous social conquests of the masses. The "national unity" sought by many will not put an end to this war. These calls are intended to disarm the working class and divert its attention in order to facilitate the implementation of the budget cuts and counter-reforms, starting with the Macron Laws (a series of laws for the privatisation and liberalisation of the economy as well as attacks against certain professions).

The government is at "war"with our class. And in order to divide it, it regularly uses racist propaganda. When he was Interior Minister, Manuel Valls - who is currently the Prime Minister - took over from Nicolas Sarkozy and greatly increased the racist statements coming from the government against different national minorities. Now these gentlemen are making appeals "not to confuse" the Jihadists with the whole of the Muslim community in France. But of course they know that this "confusion" will happen nonetheless, and they are counting on it.

This shows the real relation between the reactionary Islamists and the western right-wing. This attack, if it is successful in its aims, will not weaken the French state or the right-wing at all. On the contrary it will strengthen it by dividing the working class on religious and national lines.The perpetrators of the attack yesterday have done a great service to all the propagandists of racism who for many years have been engaged in an ideological guerilla war against the Muslim community. This racist propaganda will now intensify in the coming days and weeks. The labour movement must energetically mobilise against all far-right attacks against Muslims. It must mobilise the working class to fight not just against racism but also against capitalism which spawns and nourishes it.

Marine Le Pen calls on people to "speak out against Islamic fundamentalism" and "to take the path of effective and protective action." She seeks to stir up a climate of fear in order to reap the electoral benefit. As for protective and effective" action, this could take the form of new attacks on democratic liberties under the guise of "fighting against terrorism". Again, the labour movement must be on its guard and firmly oppose this. As we saw in the wake of the 11 September  attack in the United States, the "anti-terrorist" laws end up being used against the labour movement, including the trade union movement.

French imperialism is at "war" too, in Africa and the Middle East. Not in order to defend "democracy" or "great republican principles," but  to defend the interests French capitalism. In doing so the governments of Sarkozy and Hollande have both directly supported fundamentalist forces, particularly in Libya and Syria. This fact alone highlights the complete hypocrisy of bourgeois politicians who now pose as defenders of "republican values" against Islamic fundamentalism. Over the past months Hollande has been screaming for the Americans to start arming the “moderate” opposition in Syria. But these “moderates” are actually all Islamists. In fact French imperialism has been one of the main western backers of Islamic fundamentalism in Syria and Libya over the past few years. It has helped build these forces in order to combat the Arab revolution and to defend the narrow interests of French capitalism.  In fact, without the direct support of imperialism the Islamic fundamentalists could not have survived.

The imperialists do not deal with these reactionary forces with the aim of defending the people or to protect any particular principles, but on the basis of their own narrow and immediate interests. Yesterday France supported Jihadists in Syria; today it fights some of them while it pours more money into others. We must denounce this hypocrisy and reject any attempts to exploit the attack against Charlie Hebdo to justify the intervention of French imperialism in Africa and the Middle East.

The basis of terrorism and Islamic fundamentalism was not established by the Quran, but by capitalism and the poverty, exploitation, imperialist wars, racism and all other forms of oppression that it means for millions of Muslims around the world . We cannot fight fundamentalism on the basis of so called "values ​​of the Republic" - ie. the capitalist Republic which exploits, excludes and lays off vulnerable and marginalized people all over the world. We must offer the Muslim youth a program and perspectives to do away with capitalism and imperialism. In France as elsewhere, it is above all the responsibility of the Left and the labour movement to undermine the foundations of terrorism and fundamentalism. And for this, we must firmly reject all "unity" with the right wing, the ruling class and its state.

Jérôme Métellus is the editor of the French Marxist journal Révolution