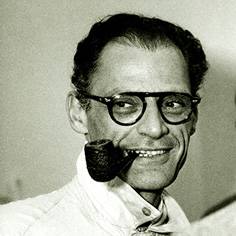 Last week, Arthur Miller, the dramatist who wrote plays that dealt with big moral and political questions in America, died. The legendary playwright, who continued his commitment to art and politics until the end of his life, was 89.

Arthur Asher Miller was born October 17, 1915, in New York City, and was the son of a prosperous clothing manufacturer. With the crash of the stock market in 1929, the Millers’ were ruined, and the family moved to Brooklyn. The Depression clearly left its traces in his mind and lay the foundation for many of his works. He was quoted in the London Times, saying: “Until 1929 I thought things were pretty solid and somebody was in charge, probably a businessman and a realistic, no-nonsense fellow. In 1929 he jumped out of the window. It was bewildering.” The awareness that you could lose everything in one go, that capitalism hardly ever raises somebody from rags to riches but is more likely to violently throw people into deep poverty, remained with Miller throughout his life. Consequently, he could not simply stand aside from the outside world and its miseries and devoted his life to a committed form of art.

Because there was no money to go to university, Miller became a low-paid shipping clerk in an automobile parts warehouse. He started reading avidly and developed an interest in politics and in literature. His own working and reading experience drove him in a leftward direction. Though never a Marxist, Miller had embraced a certain form of socialism, which was more of a liberal-humanist kind. Social class is a recurrent theme in his plays, as seen in his first Broadway hit “All My Sons,” in which a military manufacturer knowingly sells defective parts, causing the deaths of American pilots.

His breakthrough, however, came with the now classic play “Death of a Salesman”, a simple story about an American family crushed under the boot of American capitalism. Salesman Willy Loman has come to embody the victim of a hostile and commercial world. Gradually, the salesman loses control over his own fate and falls into decline. Although Willy has worked hard his entire life, he gets sacked from his job. The idea that if you simply work hard, you will be lucky in life, is shattered. The American Dream proves to be an illusion.

Ironically, his growing success made Miller into a millionaire. At the same time, the reactionary voices of political persecution called his plays anti-American. The playwright was indeed despised by the American establishment. In the 1950s this culminated in a witch-hunt against him along with so many other left-wing artists and people in general. The House Un-American Activities Committee even turned to Hollywood looking for names. Only by naming others could communists clear themselves and escape further torture by the inquisition. In true McCarthyite fashion, he was dragged before the Committee in 1956. But unlike Elia Kazan, the director of several of Miller’s plays, he refused to name names, even though this put his career at risk.

“The Crucible”, set during the 1692 witch-hunts in Salem, Massachusetts is a clear allegory of the “Red Scare” anti-communist policies of McCarthyism. In 1692, in Salem Village some children accused other villagers of being witches in league with Satan. In the play protagonist John Proctor would rather die than name names. He keeps his conscience clean.

Fast forward fifty years later. George W. Bush wages a “war on terror” and wants to get rid of the “bad guys”. Just like with Senator McCarthy, you are either with the United States or against them. Until his last days, Arthur Miller objected to the foreign policy of the hawks in the White House. About Bush he said: “He’s not a very good actor. He’s too obvious most of the time, he has no confidence in his own facade, so he’s constantly overemphasizing his sincerity.” That verdict may be too mild but one thing is certain: Miller remained a committed artist until the end of his lifetime, and that is quite an achievement considering the number of left intellectuals turning cynical in their older age. Some of his plays grabbed people by the scruff of the neck and made them think about the present world. Miller liked to say theatre could “change the world”. Given the limits of what an artist can do, he did not change the world... but he definitely changed American theatre.