Details
the workers of Zanon-Sindicato Ceramistas in Neuquén, Argentina
24 August 2009

"After 9 years of struggle we have achieved the definitive expropriation of our factory." 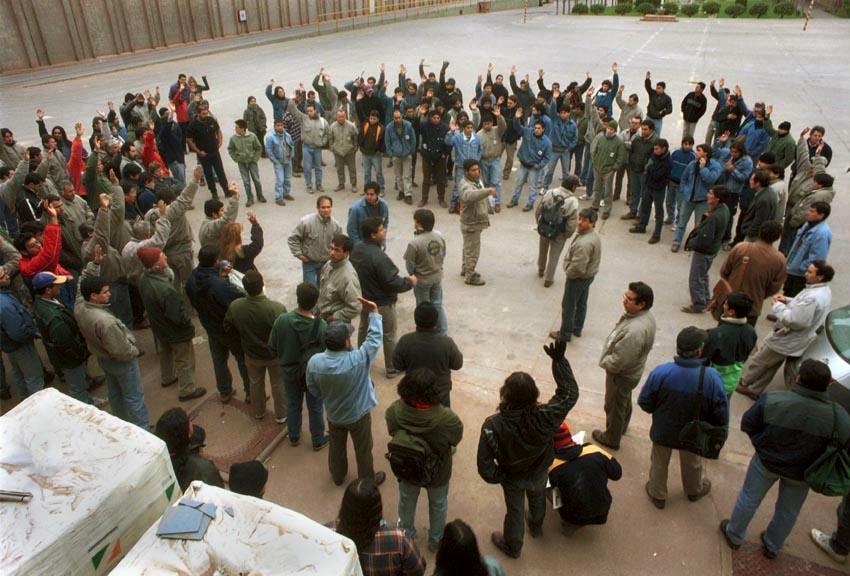 After 9 years of struggle we have achieved the definitive expropriation of our factory.

The path taken by the workers at Zanon would not have been possible without previously seizing our union representation from the trade union bureaucracy.

Firstly, in 1998 we recovered our internal committee to struggle against sackings, poor treatment, humiliation and for safe working conditions, against multiple positions of workers, for our wages etc., but above all to establish a new form of work – direct democracy in order later, in 2000, to recover our union and to place it at the service of the workers.

Over the past almost 9 years a lot of water has passed under the bridge, and we value greatly the support we have received throughout this struggle – from the community of Centenario, Neuquén, Plottier etc., who at the end of 2001 arrived with a packet of noodles at the tents that sustained us for 5 months to the members of unit no. 11 who are just a few metres from the factory who gave us their food rations for 3 days so that we could continue our struggle.

The Neuquén regional Mothers of Plaza de mayo, who from the very first day adopted us as their sons and who came out to the streets together with us to this day, resisting with us 5 eviction orders, as well as repression and threats.

The faculty comrades from ATEN, Neuquén CTA comrades as well as the national and international solidarity from comrades we don’t even know and who, aware of our struggle, send us strike funds so that we could to resist.

We also learned how to stand in solidarity with other workers, creating a permanent strike fund. We believe that coordination is fundamental for the victory of workers in their struggles. From the miners of Río Turbio, oil workers from Las Heras, workers from factories from Neuquén and Río Negro, Garrahan Subterráneas, aeronautical workers, railway workers, including workers from the unemployed movement occupied factory movement and dozens of occupied factories.

From the beginning we opened the factory to the community, receiving thousands of children and adults so that they could learn about the experience of our struggle.

We consolidated student-worker solidarity both with young secondary students as well as with comrades from the universities which had and has its expression in the framework agreement for cooperation with the university. We held musical festivals with no police presence, with regional artists and national groups such as La Renga, Attaque 77, Bersuit Vergarabat, León Gieco, Raly Barrioneuvo, Dúo Coplanacus amongst others, who stood in solidarity with our struggle, leaving their art and solidarity with the Zanon workers, embodied in the community of Neuquén.

Our struggle was always based on the methods of class struggle, identifying governments, the bosses and trade union bureaucracy as the enemies of the workers. This experience built up over the years and with the enormous support that our struggle has in the province as well as nationally and internationally enabled us to shift the political will of the MPN provincial government, which had to propose and vote for the expropriation bill.

Schools and hospitals are empty and the only public works they are talking about is the construction of prisons to lock up our youth, while every day dozens of families die in fires that start in the electrical sockets in their shanty homes.

Thus, despite the enormous victory we have achieved, in the context of the international economic crisis, obtaining the expropriation from this government, which has a much greater value, from the workers’ management of Zanon and the Neuquén Potters’ Union, we are convinced that our struggle is not over, because as from the first day we consider that salvation will not be won individually but rather by the whole of the working class.

Brothers and sisters, to all those who took part in some way, who provided their grain of sand: share in the joy of this great step!!!

To all comrades who continue to look on with incredulity, perhaps fearful, perhaps skeptical, we invite you to be a part of this history which requires nothing more and nothing less than providing a grain of sand in the transformation of reality and the support for the dream of our 30 thousand comrades – a society without exploiters or exploited!

Zanon belongs to the people!