It would seem that the force of the wind, which was blowing at more than 60 km/hr in the Neuquén capital, was an omen of what was to come. 26 deputies supported the definitive expropriation and this sealed the declaration that the factory was of public interest and the transfer of Cerámica Zanon to the Fasinpat cooperative.

“This is amazing. We are happy. The expropriation is an act of justice. We will not forget the people who supported us during the most difficult times, nor the 100 thousand signatures that supported our project,” said an emotional Alejandro López, General Secretary of the Sindicato Ceramista de Neuquén (Neuquen Ceramic Workers Union - SOECN) and part of the political leadership of Zanon. 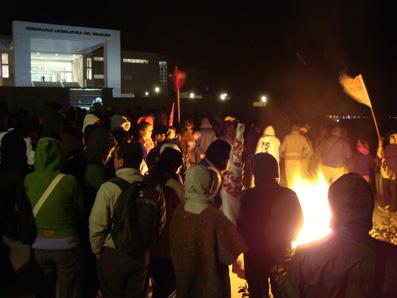 Since Cerámica Zanon was taken over by the workers, 470 families live directly on the work produced by the factory which is estimated to have generated 5000 jobs indirectly. The symbolic struggle of the workers and the great support from the local community finally achieved legitimate recognition by the provincial government of the social and productive value that workers’ management has promoted since 2002, the year in which the workers began administrating the factory – without bosses, managers or owners.

One must remember the judgement issued by the courts in 2001 which ruled that there had been an offensive bosses’ lockout and the sentencing of management of Zanon for tax evasion.

The awaited day began at four in the afternoon with a meeting at the San Martín monument, where the mothers of Plazo de Mayo, the widow of Fuentealba, Sandra Rodríguez, the leadership of ATEN, ATE and SEJUN, the lawyers of CEPRODH, representatives from the Mapuche Federation and various social, political and human rights organisations as well as social activists, families and sympathisers participated. There was a genuine multitude of people - approximately five thousand people. Fellow workers from Cerámica Stefani and Cerámica del Sur were also present. The workers at Cerámica Neuquén went on strike in order to be there, a measure which had 100 percent support. Workers from INDEC arrived from Buenos Aires and other occupied factories along with trade unionists from the University of Saõ Paolo in Brazil.

Once assembled, they headed to the legislative palace heading up the march with a flag of Carlos Fuentealba. The marchers filled up 20 blocks while chanting, drumming, full of emotion. When night fell there was the rhythm of a murga (popular musical theatre) from Cutral co, which provided warmth and colour to the hopes and expectations.

It was quite an event. While fighting for 9 years for Cerámica Zanon to be declared of public interest - in order to legalise their dream, they did not wait for formalities and began to build solidarity and commitment with the local, national and even international communities from the beginning in November 2001 when Luis Zanon sacked, without prior warning, the 380 workers and potters. They finally achieved their historic demand.

The workers set up a stage and speakers outside the Legislature so that those present could listen, word for word, to the development of the session inside which began just after 6 in the afternoon and ended around midnight.

“This is the best reflection of an organised struggle that learned to win the support of the whole of society,” said Verónica Huilipan from the Mapuche Confederation, who appeared very emotional because of the “political victory of the organisation.”

“This was an important historical event and an extremely important event in the struggle of the workers,” explained students from student groups, No pasarán and En Clave Roja.

“Many of us started down the path of political activity with the struggle for the expropriation of Zanon and this shows us today that all of this strength passed from being a possibility and to a reality,” stated the students.

The debate went smoothly. The expropriation was supported by the overwhelming majority. The previous step had been taken last Tuesday when the Budget and Finance Committee approved the bill by a majority and all groups agreed to quorum to put the project on the floor of the chamber of deputies.

50 workers were present at the session while the remaining 100 along with thousands of sympathisers listened with expectation to the arguments of the deputies outside the building.

José Russo, president of the Neuquén People’s Movement (MPN) and reporting member of the project from the Executive Power and main proponent of the proposal together with minister Jorge Tobares and the deputy from the Alternative, Soledad Martínez, said, “This is miraculous… The work and lives of many people went into these decisions, not factories, through whose efforts the spirit of labour survives… This effort must be rewarded…” and that, “the workers had worked for 8 years under conditions of insecurity and we have to support them in order to create a future.” 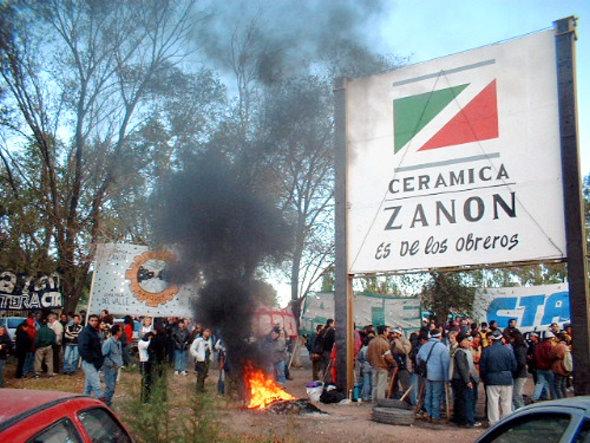 This also highlighted the value that the deputies of her bloc and the workers placed on the need to guarantee the supply of labour. The majority bloc succeeded – despite the fact that differences emerged at commissions – in voting unanimously.

For her part, Soledad Martínez said that this expropriation “contained no room for discussion – judicial, political or otherwise,” and explained that it was a safe measure for the state. “There is zero possibility that the Province will receive claims that will prevail against it.”

The vote of the radical bloc was divided. In this case only Eduardo Benítez supported the Executive’s project. The position of the radicals received boos from the potters who from this point were unable to sit back down.

The deputies of the Southern Free (Libres del Sur), from UNE-MUN-PS and Neuquén Alternative gave full support to the social vocation of the workers, the struggle and resistance that they exercised during the five evictions that were used to try to remove them from the factory.

At the end of the vote, the workers embraced one another in a single cry of satisfaction for having achieved what they had been struggling so hard for.

Only the cry of “We did it comrades!” could be heard in the Chamber along with shouts, jumps, tears, hugs and smiles.

Outside it was the same: shouting, handshakes, singing and laughter. The workers waited for their comrades, full of the hopes of the meeting and the memory of the struggle over nine years for production, politics and solidarity which finally received legal protection and had been recognised by the local political power. They had the recognition from the local social powers from the beginning and with it managed to legitimise one of the most important processes in Argentina in terms of the occupation and bringing into production of factories abandoned by their owners and then retaken by the workers under workers’ control.

The bill basically states: “it is a firm decision of the state to support the workers in their struggle, proposing the expropriation of the factory and the subsequent transfer to the cooperative such that they may continue with the workers’ control they have implemented to date… As the real estate, machines as well as tangible and intangible assets of which the industrial plant is composed are indispensible so that the workers can continue their productive activity, it was necessary to take a political decision which provided a definitive solution to the proposed situation…”

The potters can now market their products, including the use of the commercial brand which they had previously not been able to do. The expropriation took place with the agreement of the bankruptcy receivership and the secured creditors, that is, with the consent of the World Bank, SACMI, the Italian company that supplied the machines and the Autarchic Institute of Productive Development (IADEP), an agency of the Province.

The Province only has to pay, by way of compensation, a value greater than 23 million pesos before formally assigning it to the workers. On average this is 150 and 180 million pesos minus than what was paid to creditors and 9 million to the IADEP to write off the debt. The bill was presented by the Provincial Executive last May, after lengthy debates and amendments that had to be made in order that it was accepted by the workers, given that certain were not negotiable from the point of view of the potters.

One of these regards the payment of the expropriation. On several occasions the workers expressed their position against taking over the millions in debt owed by Luis Zanon, arguing that they were part of the those the company owed money to due to the non-payment of wages and bonuses. Similarly they were also opposed to the State compensating creditors, given that this was private debt and it would not be right to use public funds to pay it off.

“It has been proven by the courts that Zanon was asset stripping and that creditors were part of the fraudulent bankruptcy because they gave credit to the owner that was not invested in the factory. If something is to be paid, Luis Zanon should pay it, who is being prosecuted for tax evasion,” declared Omar Villablanca, Zanon worker and member of the Managing Committee of the Ceramic Workers’ Union.

However, the legislative resolution represents a great precedent for the other factories and companies being run by the workers throughout the country, for which definitive expropriation has not yet been declared.

“This is for the 30 thousand comrades who disappeared, for the mothers of Plaza de Mayo, for comrade Boquita, for Carlos Fuentealba and for Kosteky and Santillán,” said and emotional Alejandro López at the end of the session. However, López warned that, “the expropriation solves the legal part. The continuation of the work requires other political decisions,” in terms of the State contributions that the factories “under the bosses” received. “They received subsidies for electricity and gas that we aren’t getting, included for salaries as well.”