Details
In Defence of Marxism
10 September 2009

The workers at IMPA occupied factory in Argentina have won a first victory. The threat of immediate eviction has been lifted. 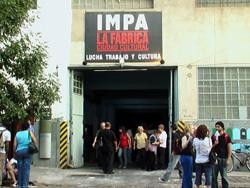 We have just received the news that the threat of immediate eviction of the IMPA occupied factory in Argentina has been lifted. The main creditor of the factory, the state owned Banco Nación, has given its support to the workers’ cooperative running of the company, thus removing the main argument of the judge for the expropriation. The workers in the factory wish to express their thanks to all those who participated in the international solidarity campaign. Eduardo Murua, one of the workers' leaders, said he was very pleased with the international campaign of support. He said that they had received a lot of solidarity messages from many countries.

As the IMPA workers say in their statement, this partial victory is the result of "all the legal challenges by the workers, the 14 day-long hunger strike by comrades Sonia Gutierrez and Eduardo Murua, the support and solidarity from artists, leaders and members of other organisations and the residents in the area who have shown their constant support in the last few days. Today we can say that we will continue with our activities and that the imminent threat of eviction has been lifted. We have won the first battle.”

The workers have committed themselves to continue the struggle and to support other factories facing similar threats.