The recent agreement between the IMF and Argentina, passed against the backdrop of mass protests, avoids through postponement what would otherwise have been an imminent default of its 2018 loan. The conditionalities of the agreement will mean a severe austerity programme, and the further subjection of the country to the IMF through quarterly inspections. The two parties are actually extremely unlikely to achieve their stated aims. The passing of the IMF agreement has opened up deep rifts within the ruling coalition Frente de Todos and is exerting powerful pressure towards national unity at the top to prevent a social explosion at the bottom.

The immediate reason for the IMF-Argentina agreement is the fact that the country was unable to repay a $2.8bn instalment of the 2018 stand-by loan. In 2018, the Argentinean government of right-wing president Macri borrowed a record $57bn from the IMF. Macri then embarked into a whole series of counter-reforms (to labour law, pensions, etc.), which provoked a massive protest movement, and he was finally unable to fully implement them.

At that time, a social explosion and the overthrow of the government by a mass movement on the streets (as had happened in the 2001 Argentinazo) was on the cards. It was only averted because the trade union leaders and kirchnerismo (the ‘left’ peronist political movement led by Cristina Fernandez, the widow of former president Nestor Kirchner) managed to channel popular anger towards electoral channels, ending up in the victory of the kirchnerista Frente de Todos and the election of Alberto Fernandez as president in 2019. A large part of the 2018 IMF loan ended up in the hands of capitalists, who then proceeded to syphon off the money abroad, a large part of it to shady accounts in tax havens.

That loan, which was contracted by a right-wing government and from which only the capitalists benefited, is now like an albatross around the neck of the Argentine economy. The government of Alberto Fernandez is an uneasy alliance between the president himself, a representative of the more bourgeois ‘respectable’ wing of the peronists, and vice-president Cristina Kirchner, representing the more ‘left’ kirchnerista wing of the movement. Both have worked towards maintaining the stability of the weak, crisis-ridden Argentinean capitalist economy, including dutifully repaying the debt to the IMF.

Until, that is, this became completely impossible. According to some calculations, net central bank reserves had become negative, after paying over $1bn to the IMF in January. The prospect facing the IMF and the Argentine government was a very costly default. Costly for the IMF in terms of the amount it would lose, but also from the point of view of setting a precedent for other countries. Costly from the point of view of the Argentinean government as it would cut it off from international lenders at a time of deep economic crisis. An agreement had to be reached.

Said agreement, which comes after two years of talks, restructures $44bn of debt, allowing Argentina to access fresh funding, including a first disbursement of $9.7bn. However the programme comes with strict conditionalities and is based on a set of predictions and forecasts that not even the IMF representatives themselves believe can be met. First of all, the programme will be subject to quarterly inspections, which means that the IMF will closely monitor the Argentine government’s policies. Threat of default will be permanently hanging like Damocles’ sword.

Amongst the terms agreed is a progressive budget deficit reduction from 3 percent in 2021, down to 0.9 percent in 2024 and a balanced budget in 2025. This means a brutal fiscal adjustment, the brunt of which will fall on the working class and the poor. This will be done mainly through cuts in subsidies to the prices of gas and electricity to household consumers. That is, Argentine workers will see their bills go up by $3.8bn (1 percent of GDP) to fund debt repayment to the IMF. At the same time, the agreement bars the government from printing money to finance the deficit in an attempt to fight inflation. Targets for inflation are also wildly unrealistic, from 52 percent currently, down to between 38-48 percent by the end of the year. This at a time when ,on top of previously existing inflationary pressures, Argentina has been hit by the impact of the war in Ukraine in terms of worldwide prices, particularly in the energy sector. In reality, Argentine economists forecast inflation to reach 60 percent!

No one believes that the aims of the deal can be met. The proposed measures will mean an assault on the living conditions of the working class, which will see higher bills and inflation eating up wages. The agreement will have a depressive impact on an already battered economy. With higher interest rates and lower real wages, capitalists will continue to take their money out of the country rather than invest.

Ignacio Labaqui, an analyst at Medley Global Advisors, quoted in the Financial Times, described the deal as a bridge to the 2023 elections: “The IMF apparently prefers to see if the next government is more willing to implement reforms.”

IMF director Georgieva herself commented that: “Argentina continues to face exceptional economic and social challenges, including depressed per capita income, elevated poverty levels, persistent high inflation, a heavy debt burden, and low external buffers.” She cautioned that “risks to the programme are exceptionally high and spillovers from the war in Ukraine are already materialising”, and that “in this context, early programme recalibration… will be critical.” That’s a diplomatic way of saying it will fail. In fact, everyone knows that Argentina will default sooner or later. The agreement just postpones the date.

The signing of the agreement has also opened severe rifts within the ruling party Frente de Todos, between president Alberto Fernandez and the kirchneristas led by vice president Cristina Fernandez. Already in February, Maximo Kirchner resigned as the head of the FdT parliamentary group in protest, though he remains as a member of parliament. The actual agreement was only passed with the votes of the right-wing opposition Juntos por el Cambio (JxC), as a sizeable group of FdT parliamentarians either abstained (13) or voted against (28), for a total of 41 out of the party’s 117 opposing the deal.

Of course, these public shows of opposition were mainly demonstrative, as the numbers abstaining and voting against were carefully calibrated to ensure that the agreement would be passed with the necessary majority (counting on opposition support). The idea was to make a gesture towards the kirchnerista electorate, which is deeply opposed to any deals with the IMF, not to actually prevent the agreement from being signed. The kirchneristas are still part of the Alberto Fernandez government and are not prepared to abandon any of the key ministries they hold.

Days after the signing of the agreement with the IMF, the kirchneristas proposed a law to levy a 20 percent payment on those who have taken money out of the country and not declared it to the state revenue, to be paid in dollars. It is calculated that the total amount syphoned off the country to avoid tax is a staggering $400bn. However, this is mostly a propaganda move, to tell their voters that they want the rich and tax evaders to pay for the loan from the IMF. In practice, this law, if passed, will have little impact. Tax evaded money, by definition, is kept safely beyond the reach of the authorities and it will remain that way.

However, the signing of the agreement revealed powerful tendencies towards national unity, with opposition lawmakers voting in favour and giving the government the necessary votes to pass it. This is quite significant at a time when all parties are thinking about the forthcoming elections in 2023. It is clear that there were sections of JxC that were considering voting against in order to bring down the government, but the ruling class disciplined themselves. Preventing a default and further political turmoil at a time of a deep social crisis was paramount from the point of view of the ruling class. Faced with the threat of a social explosion from below, the capitalist class is pushing for the unity of their political representatives in both camps, government and opposition. The IMF Director herself stressed this point: “Strong political and social consensus is key to sustain the implementation of the reform agenda“. Thus, the signing of the agreement with a large parliamentary majority is not a sign of strength, but rather a sign of weakness.

So, finally, the agreement was passed, despite a series of mass protests in the streets since December and brutal police repression, which has included the targeting of workers and popular organisations, the arrest of known left-wing activists, etc. 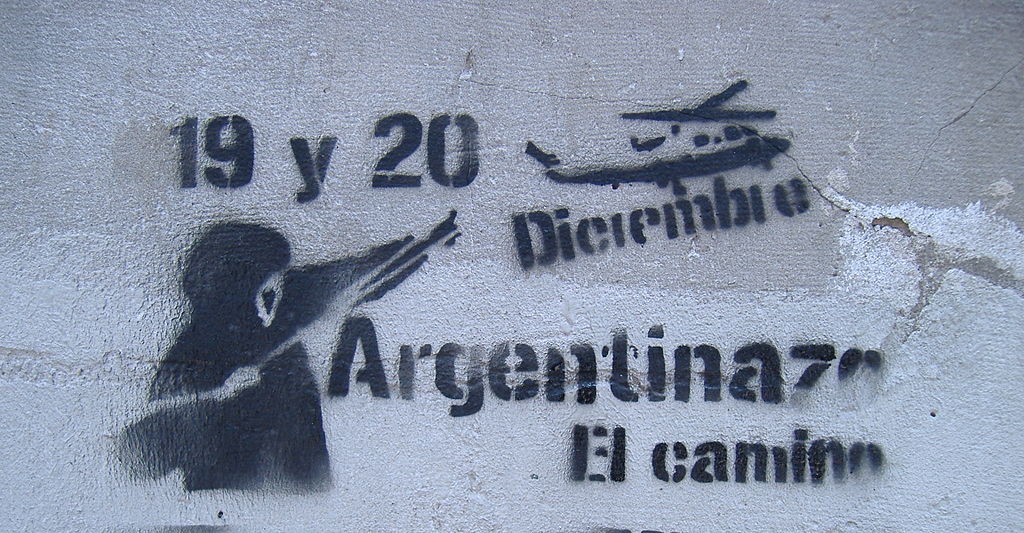 These are the conditions preparing a massive social explosion – the ghost of the Argentinazo haunts the ruling class / Image: Pablo D. Flores, Wikimedia Commons

In reality, what is being prepared in Argentina is a massive social explosion. The elections of 2019 acted as an escape-valve to prevent an uprising at that time, like those of Ecuador and Chile. The anger of the masses, having been offered no real alternative by the bureaucratic trade union leaders, was channelled towards the elections. There was a faint hope that, with the return of the Peronists to power, there would somehow be a repetition of the economic growth of the Kirchner years. That was an illusion, the cycle of high prices of raw materials which underpinned that growth had ended.

And then the pandemic struck, throwing the Argentine economy into a tailspin and provoking a sharp rise in poverty, from a low of 25 percent in 2018, then a rise to 35 percent in 2019 and a peak of 43 percent in 2020. Those figures have not substantially gone down, and despite nominal economic growth, the official poverty rate remains at a staggering 40 percent.

These are the conditions preparing a massive social explosion. The ghost of the Argentinazo haunts the ruling class. The bureaucratic trade union leaders of the CGT and CTA, as well as the leaders of kirchnerismo, are doing their best to prevent it. But all the signs are there, and there have already been some regional and local explosions. The problem is that the longer the official organisations of the labour movement manage to keep a lid on the situation, the more violent will the explosion be once it finally breaks through.

Unfortunately, the official representatives of the left in the FITU electoral coalition, seem to be focussed on a strategy of slow accumulation of forces on the electoral front, when what is required is a bold revolutionary policy posing the question of the crisis of capitalism at the centre of the political struggle. Rather than gaining a few more votes and one or two additional deputies, what should be posed is the need for a clear socialist alternative and a plan of struggle to bring down the IMF agreement, and with it the political parties which back it, both in government and in the opposition. The only alternative to the crisis of Argentine capitalism is for the workers’ to take the reins of the country, kick out imperialism and expropriate the capitalists.