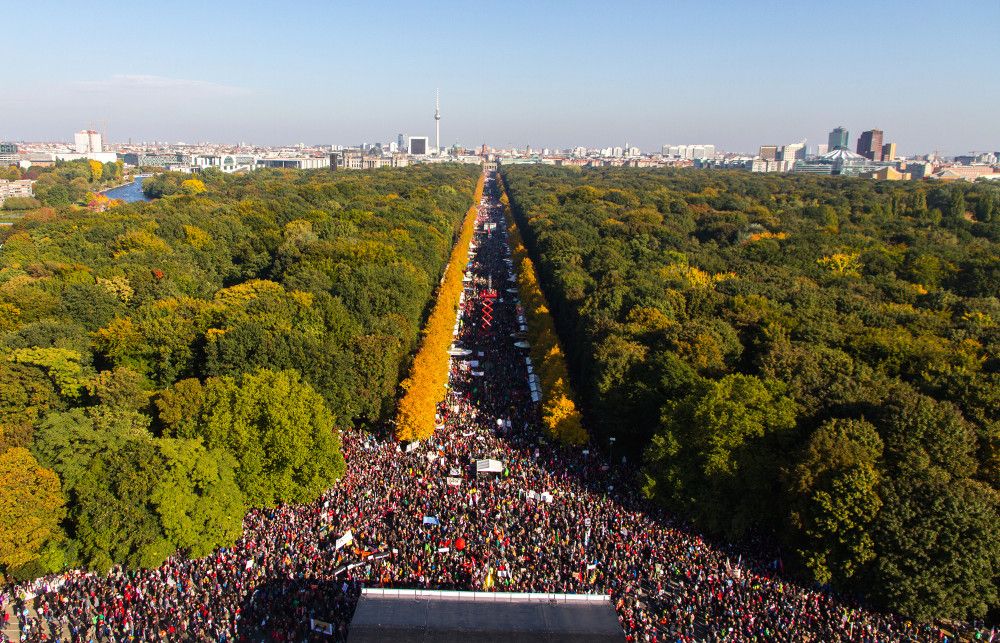 Some 250,000 activists from all over Germany marched through the city of Berlin last Saturday in protest against the envisaged free trade agreements TTIP (Transatlantic Trade and Investment Partnership) and CETA (Comprehensive Economic and Trade Agreement). This event had been called by a broad alliance of over 100 organisations and groups—including trade unions, ecologists and environmentalists, consumer and welfare organisations, farmers associations, the Greens and DIE LINKE (Left Party), as well as many other left-wing and pressure groups.

The impressive attendance outnumbered by far the expectation of some 50,000 people estimated by the organisers on the eve of the actual event. Given the size of the country and the geographical position of Berlin, many demonstrators had travelled to Berlin on the eve of the event or had to get up in the middle of the night to make sure that they arrived in time. The composition of the demo was very heterogeneous; workers, trade unionists, and shop stewards marched shoulder to shoulder with left wing veterans, radicalised youth, environmentalists, and even some rather conservative middle class elements who had never been to any political demo before, but are beginning to share the mistrust towards big business and the secret diplomacy going on behind the curtains surrounding the TTIP and CETA negotiations. There was and is a well-founded and widespread fear in society that the free trade deals are bound to undermine welfare and ecological standards as well as trade union and democratic rights, public services and amenities, and the existence of small enterprises.

This was by far the biggest national demonstration that Germany and Berlin have seen for a number of years. Especially for many trade unionists, youth, and other activists, it provided a platform to express general discontent with the current social and political situation and the policies of the coalition government, composed of Chancellor Merkel`s Christian Democrats and the Social Democrats (SPD). As a fervent supporter of TTIP and CETA, SPD leader Sigmar Gabriel, Germany`s Vice Chancellor and Minister of the Economy, was strongly criticised by several speakers and demonstrators who had prefabricated their own placards and banners. It is significant that sections of the SPD rank and file, including the Jusos (SPD youth organisation), also joined the march. 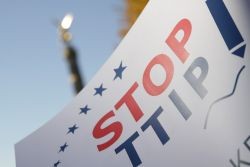 Stop TTIP. Photo: Mehr DemokratieThe huge attendance came as a surprise to big business and government circles, and some mainstream media tried to play down the figures and the importance of the event, or portray the whole event as a right-wing nationalist undertaking. Yet in spite of the broad character of the alliance, trade unionists and left-wing people represented a clear majority. The event revealed that there is enormous social discontent building up in Germany, and that even with lukewarm mobilisation the unions are still the decisive force in the country. Comrades of Der Funke (IMT Germany) were also present with a stall and attracted the interest of a number of demonstrators. All the copies of the latest journal we had brought along were sold out. In an article in our journal we highlight the importance of mass protest as the only means to stop the attacks that TTIP and CETA will usher in, as well as the need to turn the struggle against the free trade agreements into an international struggle for a socialist society.