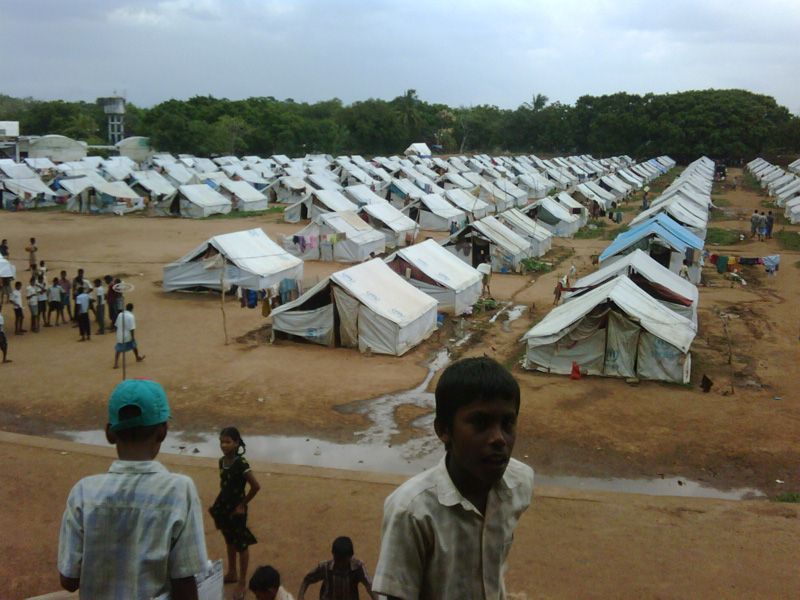 More than 300 desperate Tamil refugees are being refused asylum by the Australian authorities, with the connivance of the Indonesian authorities. While governments leave these people in a terrible state, workers in Australia and Indonesia have expressed support and solidarity. Join them!

In the wake of the most brutal military offensive against the Tamils this year, hundreds of thousands of Tamil people were displaced from their homes and quarantined in “concentration camps” across Sri Lanka. There are 32 such camps in Vavuniya alone which are home to more than 160,000 Tamil refugees. In total, there are about 300 thousand Tamils who have been detained in these camps since the military offensive against the Tamil Tigers ended in May.

The condition of these camps is dire. Amnesty International said that the camps “are run by the military and the camp residents are prevented from leaving them... Displaced people have even been prevented from talking to aid workers. With no independent monitors able to freely visit the camps, many people are unprotected and at risk from enforced disappearances, abductions, arbitrary arrest and sexual violence.”

Hundreds of Tamil refugees in desperation, trying to escape this inhumane condition, have risked their lives on the high seas by boat to seek asylum in Australia. For weeks, more than 250 Sri Lankan Tamils have been stranded in a boat in Merak, Indonesia. Another 68 remain on the Australian customs ship Oceanic Viking off Tanjung Pinang, Indonesia. Their boat was intercepted by the Indonesian government on its way to Australia after the Australian Prime Minister Kevin Rudd phoned the Indonesian President Susilo Bambang Yudhoyono urging his government to prevent the boat from reaching Australia.

The Rudd government has been refusing to grant asylum to these oppressed Tamils and the Indonesian government has played a role as their border guard. However, the Australian workers have shown a totally different attitude; Australian seafarers, miners and wharfies donated $10,000 to the refugees, showing working class solidarity to their brothers and sisters. The Indonesian workers have also shown their solidarity as KASBI (Confederation Congress of Indonesian Union Alliance), one of the trade union federations in Indonesia, has organised a campaign to help the plight of these asylum seekers.

Below we publish a joint statement by a number of organizations across Indonesia, Malaysia, and Australia condemning this inhumane treatment of the Tamil asylum-seekers and demanding their asylum rights to be recognized. Militan, a socialist organization in Indonesia, fully supports this joint statement and the demands it carries.

We also publish here an appeal by the 255 Tamil asylum-seekers who have been stranded in Merak, Indonesia for weeks.

November 5, 2009 -- All respect for elementary human rights and dignity have been thrown overboard as the governments of Australia, Indonesia and Malaysia refuse to accept the latest wave of Tamil asylum seekers fleeing war and oppression in Sri Lanka and instead treat them like criminals.

The Australian government is the only of these three governments to have signed the 1951 UN Convention Relating to the Status of Refugees but it is refusing to carry out its obligations to asylum seekers under that convention.

For weeks, more than 250 Tamil-speaking people, including children, remain in dire conditions on a boat in Merak, Indonesia. Another 68 Sri Lankan Tamil asylum seekers, including children, remain on the Australian customs ship Oceanic Viking off Tanjung Pinang, Indonesia. Both groups are refusing to leave their boats for fear that Indonesia will lock them up in detention centres with a reputation for brutality and/or send them back to an uncertain future in Sri Lanka. On November 1, it was reported that a boat of asylum seekers had sunk near the Cocos Islands, an Australian territory in the Indian Ocean, and 12 are missing feared drowned.

Meanwhile, 207 Sri Lankan asylum-seekers are being held at the Immigration Detention Centre at Kuala Lumpar International Airport, and 108 Sri Lankan refugees are being detained at Pekan Nanas Immigration Detention Centre in Johor, Malaysia. Malaysia is both a transit point and a country of permanent asylum for tens of thousands of refugees from countries such as Myanmar and Sri Lanka.

Australian Prime Minister Kevin Rudd claims his Labor government's policy is "humane" but "tough". It is neither. The Labor government of Australia is bribing the Indonesian government of President Susilo Bambang Yudhoyono to intercept the boats of asylum seekers on their way to Australia. This "Indonesian solution" outsources Australia's obligation to asylum seekers to Indonesia just as its predecessor did to Nauru and Papua New Guinea in the name of a "Pacific solution".

Many of those seeking asylum in Australia come from Sri Lanka where the Tamils have suffered from decades of brutal oppression at the hands of various Sinhala national-chauvinist governments. The government of Mahinda Rajapaksa unleashed an all-out terror campaign this year, killing some 20,000 Tamil people in the month of May. Since the end of the military offensive, more than 300,000 Tamil people have been imprisoned in concentration camps and denied the right to return to their homes. It is estimated that 31,000 children are among those incarcerated, without proper access to shelter, food and medicine.

The Australian government, like many governments in the West and across Asia, supported the Rajapaksa regime throughout its final onslaught preferring to maintain trade links, including selling arms, rather than stop the Tamil minority from being massacred.

We condemn the Australian, Indonesian and Malaysian governments for their lack of commitment to the humanitarian problems faced by the refugees and we demand:

That the governments of our countries withdraw financial and diplomatic support from the Sri Lankan government until it closes the concentration camps, and allows the Tamils trapped in camps to go back to their homes without fear of persecution.

That no refugee fleeing war and persecution should be forced to return to the country they fled.

That Australia, as a wealthy and developed country which has exploited its poorer neighbours, should immediately develop a program to settle tens of thousands of asylum seekers and take a leading role in helping reduce the misery of the world’s millions of refugees, most of whom are trying to survive in desperate conditions in refugee camps in some of the world's poorest countries.

That Australia allow the asylum seekers trapped in Indonesia to come to Australia to have their claims heard here and we condemn the Indonesian government for being a puppet for the Australian government in preventing refugees from going to Australia. This cooperation between these two governments is a threat not only to the Tamil refugees but to human rights in the region.

That Australia must immediately close the Christmas Island refugee prison, close it down and allow those asylum seekers to live in freedom in Australia while their claims are processed.

That the Indonesian, Malaysian and Australian governments respect the human rights of the refugees, give protection, humanitarian aid and accomodation to the refugees as long as they are in Indonesian territory and place no limitation for their rights to seek an asylum.

That the Malaysian and Indonesian governments sign the UN Convention Relating to the Status of Refugees, release the asylum seekers they have in detention and allow them full access to UNHCR and human rights groups.

[If your organization would like to add its name to this statement, please write to Working Peoples Association at international@prp-indonesia.org]

Appeal by 255 Tamil asylum seekers on boat in Merak, Indonesia

We are very thankful to the PRP and KASBI who came forward to aid us. We appreciate all the work you have done so far. We would also like you to represent us in our negotiations with UNHCR and other organisations to come to a resolution of our desperate situation.

The following is our appeal:

For over 60 years Tamil-speaking people in Sri Lanka have faced and continue to face the huge repression of their rights from the Sinhala Buddhist nationalist governments. Not one international government, either from the west or from Asia, intervened on behalf of the oppressed minority to counter the attacks. The lives of thousands of ordinary Tamil-speaking people have been lost as, under the present Rajapakse government, Sinhala chauvinism has peaked.

Children have lost parents. People have lost entire families. A generation of young people has lost its future as education provision has been decimated. The suffering of Tamil-speaking people is unspeakable.

The Sri Lankan government declared that the war is over. But people around the world know and are shocked that over 250,000 people are suffering in so-called refugee camps, which are in fact torture camps. In all parts of Sri Lanka Tamil-speaking people have been arrested and killed.

We have lost our loved ones and our lives to the war. We fled Sri Lanka just to save our lives and to safeguard our future and hoped to seek refuge in Australia, a country we believed would recognise our plight.

On 11 October 2009 our boat was intercepted in international waters and brought to Merak harbour by the Indonesian Navy. From a six month old baby to a 66 year old, including a pregnant woman, we are all still in the boat. For the last two weeks we have been hoping at least one country in the world would take us.

We understand that among the people of Indonesia there are many different religions. There are over 400 languages including minority languages which are also recognised as national languages. From this we draw hope that our democratic rights would be respected.

We are dismayed to discover that efforts are being made to detain us in camps or hotels, as we have committed no crime and only seek refuge. We have been made refugees in our own country and have lost everything we had except our lives. What we seek is a country that will not detain us and will provide education and other rights for our young ones.

We feel we have no choice but to remain on the boat until the UN or any government takes a step to offer us what we so desperately need.

We are sure that there must be a country that will recognise our desperation and can grant us the very basic rights we seek.

But until then we are determined to stay in the boat.