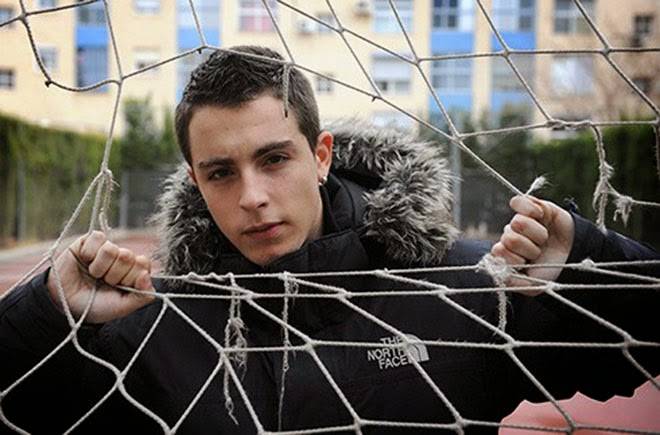 On Wednesday, June 17, police arrested Alfonso Fernández “Alfon” who will spend 4 years in jail for his struggle and political ideas. Hundreds of people, youth and working class activists, came out to the San Borromeo parish church in the Madrid working class district of Vallecas to protest his arrest. He had been denied the right to hand himself over voluntarily. This is yet another person jailed in Spain for his political ideas.

Alfon was originally arrested on November 14, 2012, during the 24 hour general strike called by Spain’s main unions against the counter-reforms of the PP government. At the time he was 19 years old. Early in the morning, as he left his home with his girlfriend, and was going to meet his uncle to join the pìckets, plainclothes police officers stopped him. After asking for his ID, the police officers claimed that he was carrying a plastic bag in his rucksack containing two paint sprays, two containers of gasoline, fire crackers and nails. Alfon denies that he was carrying the bag, and his mother says that when he left the house he was not carrying any bags. 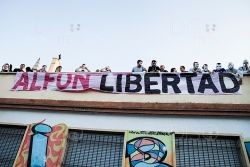 Photo: Julio L. Zamarrón Mendez / DISO PressDuring the trial Alfon declared that the police asked him to identify pictures of the Bukarenos (left wing antifascist fans of the local Rayo Vallecano FC) or otherwise they were going to charge him with “possession of explosive devices”. He also declared that during questioning at the police station he was also threatened by hooded police officers who said that if he did not collaborate it would be his girlfriend who would be charged.

On the day of the general strike, dozens of picketers were arrested, but they were all released shortly afterwards. Not Alfon. The judge considered he was a “flight risk” and decreed his pre-trial imprisonment. Not only this, but he was subjected to a special internment regime called FIES, which is a particularly harsh form of isolation used for the most dangerous prisoners. He was only released after 56 days of this harsh regime.

Left wing political and trade union organisations denounced his case as one of “political persecution” on the part of the authorities, aimed at cowing the militant youth.

During his trial, in November 2014, his lawyer highlighted a whole series of irregularities in the evidence presented by the police. The police could not prove any direct link between the bag containing the explosive device and Alfon. There were four prints, but none of them were his, and no attempt was made to ascertain whose prints they were. In the end, the judge established that Alfon was carrying the bag only on the basis of the statements of the arresting officers. The defence lawyer also pointed out that there had been a breach in the chain of custody of the bag. Alfon maintains that the first time he saw the bag was when the police opened it in front of him as he was being ID’d.

The police conducted searches in the homes of Alfon and other members of the Bukaneros, as well as in the Bukaneros social centre, but couldn’t find any evidence of explosive or incendiary devices.

The case is part of a general campaign of harassment against the Bukaneros football supporters who are known for their anti capitalist and anti fascist ideas and militancy in this working class district, with a long and proud tradition of struggle. The then government delegate in Madrid (the person in charge of the police), Cristina Cifuentes, had a particular vendetta against the Bukaneros.

Cifuentes has accused the Bukaneros of being a “violent core” which have “provoked clashes with the police during otherwise peaceful demonstrations” of having links with the “abertzale left” and has subjected them to constant police harassment, surveillance, arrests, slanders in the media, accusations of “criminal association”, etc.

The Bukaneros have replied by displaying banners in the terraces that make ironic remarks comparing Cifuentes use of the police against them with the fact that her husband has gone missing as a result of some bankruptcy case he was involved in.

More generally, this is part of a growing curtailment of democratic freedoms in Spain under the PP government, in response to the growing number of protests. The so-called “gagging law” has introduced severe restrictions to basic democratic rights like the right to demonstrate, freedom of expression, the right to report on police brutality, etc. Clearly the ruling class is taking measures to deal with this period of heightened class conflict.

Finally, in January 2015, the judge sentenced Alfon to four years in jail. The defence appealed to the Constitutional Court, which on June 15 ratified the jail sentence. Yesterday he was arrested and entered jail. Hundreds of activists from youth, left wing and trade union organisations gathered to make one last stance.

Many were dressed in white overalls and wore masks to make it more difficult for police to identify Alfon and arrest him. This is a tactic used in the Basque country as a form of peaceful resistance against the arrest of militant youth jailed for their ideas.

The jailing of Alfon is yet another case of people being jailed in “democratic” Spain for their ideas and their struggle. We say #AlfonLibertad (Free Alfon)!