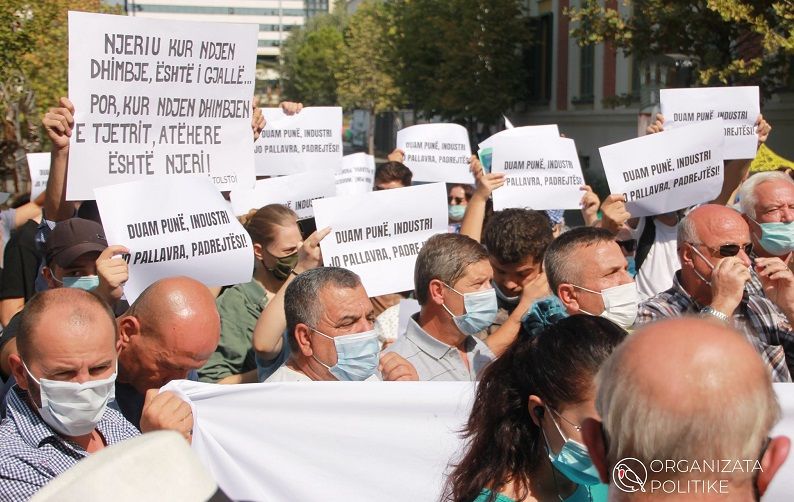 The following statement was written by the editorial board of our German website, Der Funke, calling for solidarity with Albanian oil refinery workers struggling for unpaid wages and their rights.

Since August 2020, oil workers at the Ballsh refinery have been protesting vigorously to receive 22 missing monthly salaries. Furthermore, they are demanding fixed employment contracts. After the arrival of some refinery managers on site, the workers forcefully crossed the police blockade and the company gate.

In early September 2020, they tried to occupy the factory premises. Under these conditions the management stepped out, after the police had been pushed back by the workers. To appease the oil workers, the managers promised that, within two days the signing of the labour contracts would begin, and the unpaid wages would be paid from the following Monday. But nothing happened. The protests continued and became more radical day by day. A statement by the strike committee said: “The refinery is our property. Give us back our work accounts!”

Solidarity with the oil workers at the Ballsh refinery grew throughout Albania. Over the years, this refinery has made billions of dollars in profits for various owners, while the oil workers were fobbed off with ridiculously low salaries (an average of €240 per month). Organzata Politike, a far-left organisation led by students from Tirana, is present at all the actions of the oil workers and is accepted by the workers.

“All the wealth that comes from the sweat of our oil workers is appropriated by the owners, the bourgeoisie and their political parties, but also by some trade union leaders. These are privileged and paid labour aristocrats.”

There is a call for the creation of independent trade unions throughout Albania, following the example of the miners and oil workers.

In Tirana, a mass demonstration of oil workers, miners and students took place on 26 September. They demanded not only the outstanding wages but also the nationalisation of the mining, oil and other important sectors of the Albanian economy. The representative of Organizata Politike also called for “workers’ control of the production”.

On the way to the Ministry of Infrastructure and Energy, several hundred police units brutally attacked the workers and students. The internet is full of footage of police terror in Tirana's streets. But the struggle is not over. For some days now, workers have been on hunger strike, most of them oil workers. Now, many promises have been made by members of the political elite. These promises are not believed, because a new round of privatisation has been announced for the oil industry. The workers, however, consider the oil in Ballsh as their property and are claiming the outstanding wages from the government. Privatisation is rejected by a large majority of the workers.

Once, several thousand workers were working in the oil sector. After the last privatisation there are now only 800 workers left. The Albanian multimillionaire Samir Mane has sacked their colleagues of the miners' union that was founded a year ago. There have been repeated acts of resistance by the workers against this. Now, however, the situation of the oil workers on hunger strike is becoming drastic. Some of them are in a very bad condition.

Demonstrations in solidarity with the hunger-striking workers have been taking place in all major Albanian cities since 10 October. Ballsh is just an example where a large number of workers are taking to the streets. They are threatening to close off the entire area in Ballsh and to make the city inaccessible to the authorities.

It is the responsibility of the trade unions and leftist organisations in Albania to push forward the struggle for the nationalisation of the main production sites under workers' control. The books must be opened and the capitalist wealth in the oil and mining industries expropriated. The government of Edi Rama must immediately pay the workers in the oil industry the wages they are lacking.

In addition to the raging coronavirus pandemic, virulent exploitation by the ruling class also plagues Albania.

Down with the capitalists! For socialist revolution!