Details
In Defence of Marxism
17 December 2018 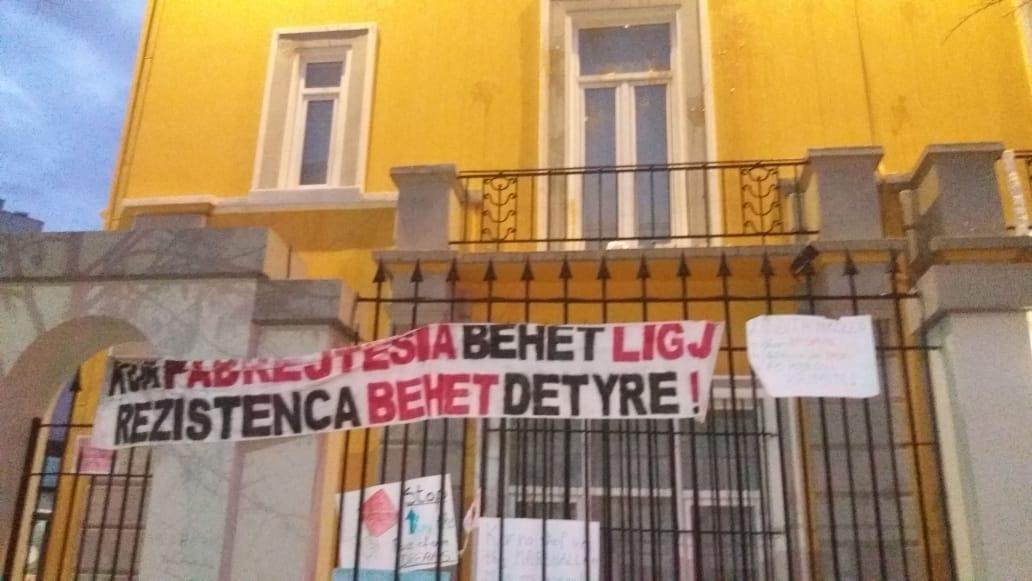 In Albania, since 4 December 2018, thousands of students have been continuously demonstrating against the degradation and injustices of the education system. The initial spark for these protests was an increase in tuition fees, cancelled by the government two days after the first demonstrations. But the demands of the students have now gone well beyond this initial grievance and target the generally poor conditions of public universities. Note: the student activist interviewed for this article is not affiliated with the IMT in any way, and we do not necessarily share all of their views.

In Albania, the cost of education today represents the largest increase in households expenses: +2.3 percent in one year, whereas the average monthly income has decreased by 3 percent, at about 400 euros per month. We interviewed one of the activists who joined this movement “for a better education and a better future.” Repression has already begun: some teachers have failed students for participating in the movement, and parents have been threatened with dismissal if their children continue protesting. All interviewees cited here therefore requested anonymity.

The actual protest has been triggered by an increase of tuition fees for university students. Can you tell us more about what this really represents for Albanian people?

The increase of fees happened last year in 2017-2018, and it was accepted by students because of the lack of any organisation. Last week, the Minister of Education in Albania, Ms. Lindita Nikolla, came to the public with a VKM (a legal decision of the Ministers’ Council) to introduce extra fees for students that fail exams. So, they would have to pay extra money to be able to have a second chance at the exam. Now, the fees would vary from 670 lek to 1000 lek per credit [ed: 1000 lek = 8.1 euros]. One test could require 14 credits, which makes almost 14,000 lek to retake only one exam. Let’s think about the salary of a waiter (a common student job), which is around 19,000 lek: so a monthly salary goes into one test alone.

Are there now more reasons to protest than last year?

The fees do not just imply more money out of our pocket. This is an act of humiliation for the students because the quality of education is poor and there are teachers that ask for money to give students a passing grade, no matter whether they deserve it or not. Actually, extra fees planned by the government nurture corruption.

A student nurse described to me her experience of the corruption in the education system:

“I failed two exams last year. One of them was because the teacher of the subject let almost everyone fail: out of 83 students, only 12 passed. Passing that test was clearly not possible. I failed in the second exam because I did not have time to revise for that one, after passing 14 tests within two weeks. Furthermore, most of the teachers sell us their own books, and make us buy them, even though they cost too much for us. For example, one book costs 4,000 lek. Just imagine buying 14 books in one semester: we would need to spend a month’s salary just for the books, or even more! We study subjects that have nothing to do with our specialism, and the reason for that is because the system has become a way of filling the pockets of the booksellers and specific teachers. I protest because I do not agree with people getting rich off our backs, while we struggle to survive. The only hope we have day to day are the rare teachers who come into class and do the best they can. The main reason I am protesting is because this system is killing our passions, it is killing our will and our hope. And I cannot put up with it anymore.“

The increase of the fees has been cancelled by the government. But a lot of students kept protesting despite this cancellation. Some are living in the school dormitories, because they cannot afford the rent prices in the capital, and are asking for an improvement of the conditions in these dorms. Today, they do not even have 24-hour water utility, with no heat, and there are five to six students living in a room that is not even large enough for three. They pay a lot of rent to live there, with no access to normal living conditions. That is just unacceptable. The government, these conditions, used to make us leave the country, but this time we have chosen to stay.

Who called for the demonstration and with what demands?

The protest was initially started at the faculties of engineering and architecture, and then within the day, it spread around every faculty in the capital, Tirana. On the second day of the protest, students from public faculties in the whole country joined the protest in the capital, and some of them protested in their own cities. Students from cities next to Tirana, like Durres and Elbasan, walked for three hours on the highway to reach the capital and join the protest. They showed the strength of the will of students to have a better future.

The students holding the speeches in the protest were seen as the leaders, yet they did want to be. They sat down with all the other 20,000 students on Saturday’s protest [ed: 8 December 2018], to show that there is no leader, that we come all together equally as we deserve to be. The space to talk is given to every student that wishes to do so. The demonstration grew bigger on Tuesday, reaching 50,000 students. 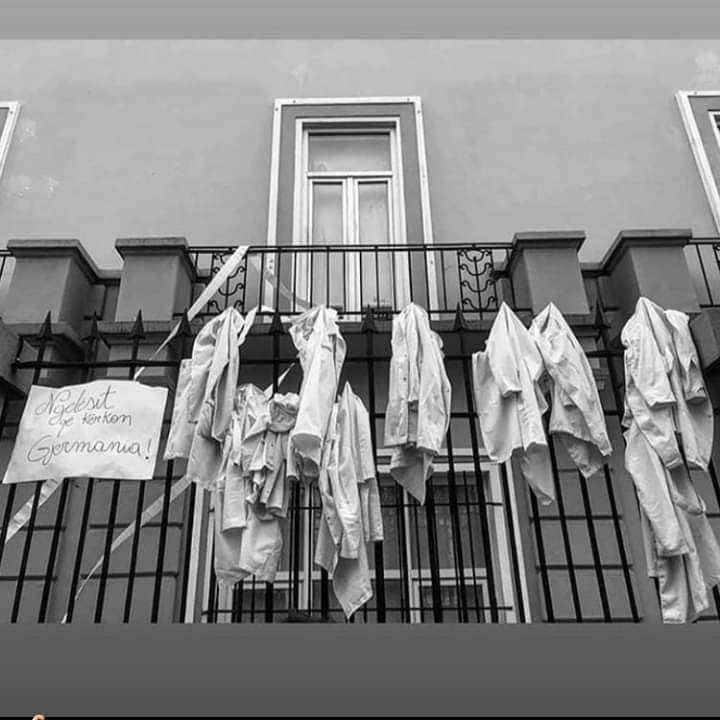 Medical students leave their uniforms at the ministry's gates with an ironic note saying, "We are the failures that Germany wants to hire" / Image: fair use

People in the protest include actual students and those who graduated and want to do better for the future generations to come. University lecturers and high school teachers joined too, as they felt that the main aim of the protest was to ensure the future of the country. People of all economic classes joined. Even students from private universities who actually do not suffer under the new law were willing to take part. As some of those students have stated in the local media, the reason they joined is because they felt they could be in the other students’ shoes.

A student at the State Faculty of Economics in Tirana shared his feelings with me:

“The first day I was angry and ready to fight for our rights. I still am actually, but since one of our objectives was accomplished I became hopeful. It is a great feeling to be part of this youth protest, ‘second December’ as we call it. It feels like big changes are going to happen, like we are here, we aren’t silent and we don’t give up. Definitely this gives me strength. I became part of this movement because the fees could have encouraged the teachers to make us fail their exams… I am not ready to pay 3,000 lek for an exam. But there are so many things that I don’t like at my faculty! For example, auditorium conditions, the behaviour of some professors and the tuition fees.”

The protest keeps moving forward. It now enters in its second week. The govern did dismiss the VKM for the extra fees, but the students are still protesting. They listed eight main demands:

How exceptional is this protest?

The last student demonstration, the last real one, was in December 1991, when students managed to destroy the dictatorship… in the centre of the capital. The result of that demonstration was the legal fall of the communist dictatorship, and the start of a new era of democracy, getting Albania into a rough transition period. Throughout the years, Albania had issues with the education system, even though many things improved. The state faculties always have a low educational standard, and many students dream of studying abroad. During these years, there have been a lot of protests, though rarely from students, more from different groups of people. The last big demo was on 21 January 2011, led by the current Prime Minister, at that time leader of the opposition. People were killed in that day, leaving the country with an ugly feeling of hopelessness.

What were the reactions of the political parties and of the government?

The reaction of the opposition parties was, of course, to back up the students. They were trying to claim that the government of Edi Rama, the Prime Minister, should fall. But that is not a request of the students. They want their government to listen and accept their demands. As explained by a student of economics:

“The opposition saw an opportunity to make the government look evil, or even hope to make it fall and take power themselves. The reason why we did not accept any political party within the protest was that we did not want to make it political. We wanted to issue the case directly with the government and for the first time in a long time, we did not want to play politics. We just wanted to say to our government: ‘We do not accept this, and you have to obey the logical will of the people.’ In my opinion, we do not need to change political parties every time we got crisis, we just need to protest, say our opinion out loud. And the government will listen, as there is no other way to face determined students.”

On the other hand, the government gave various reactions, the most important of which was the withdrawal of the extra fees. The other demands are still to be won. The Prime Minister came to the students and invited them to join him alone in parliament to talk about their demands. There are various opinions on how to manage this opportunity on the students’ side. But their trust in politics has been long-since tarnished. The students first ask that their demands are fulfilled, and only then, will we talk.

People are sick of politicians changing like old clothes. They want to impose their true will, no matter who is in charge.

What is coming next from the students’ side?

It is still to be seen how the dialogue or the lack thereof will play out. But what is certain is that this generation is determined to continue to protest for a better education and a better future.

On 14 December, the protest went further. From staying in front of the Ministry of Education, the last two days the protest spread all around the capital in a protest march. Students were holding white papers up, saying it was time for the government to respond. Today, the protest was held in front of the Prime Minister's’ office. The students are hopeful they will win their demands, but the best thing is the act of protesting itself. A new generation has arisen that will no longer sit and be silent. It will instead demand more from the government, more from school, more from themselves. Albanian people have a deep understanding of politics, it’s something everyone discusses. It’s not the case of eight demands now, it’s the case of the people imposing their will on the government, because we are tired of decisions being made without even asking us, during the last 28 years of democracy.