Details
In Defence of Marxism
20 October 2006 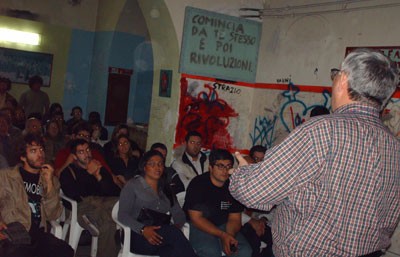 On Saturday, 14th October the "Hands off Venezuela!" campaign in Caserta organized a meeting with Alan Woods speaking about Venezuela and the revolution in Latin America in the Spartaco social centre in Santa Maria Capua Vetere. The meeting was a success, with more than sixty comrades attending. Appropriately, Santa Maria Capua Vetere is near Caserta, the ancient Capua where Spartacus started his slaves' revolt.

This wasn't the first meeting on Latin America. Since 2004 twelve meetings have been organised about the Revolution in South America, with a campaign of eight meetings January-February 2006 in different parts of the province, and discussions about Bolivia, workers' control in Argentina, and of course on Venezuela.

In his introduction Alan analyzed the struggle against imperialism in Latin America, starting from the latest speech of Chavez at the United Nations in New York and explaining how revolution is developing in every corner of South America, from the Rio Grande to Tierra del Fuego, as demonstrated by the events in Mexico, Brazil and Argentina.

A part of Alan's speech was dedicated to the Bolivian experience, in which he explained how the masses without a revolutionary party tried to carry out a change of society through the elections and the MAS, and how Marxists must stay within movements like the Bolivian MAS or the Bolivarian movement.

An appeal to support Chavez's electoral campaign was made, because for the masses the question is very clear: a vote for Chavez is a vote for the revolution and we must take our place side by side with the revolutionary workers and peasants fighting against imperialism and the oligarchy. 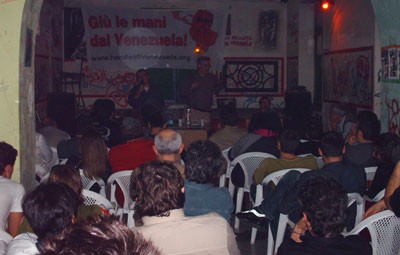 Many questions about perspectives for the Bolivarian Revolution, about the elections and our position on workers' defence, starting from the Chilean experience were made and discussed, as also was solidarity with Cuba and Bolivia.

A party organized by the local HOV committee after the meeting raised €142 for the international HOV campaign.

The meeting in Caserta was a success, like the rest of Alan Woods' speaking tour in Italy. It showed that Marxism is more revelant than ever. Left activists are looking to Venezuela as a hope for the future. By explaining our support for the Bolivarian Revolution, but also the need to carry the revolution to the end, we are on the right path to building the required subjective factor, the revolutionary party.