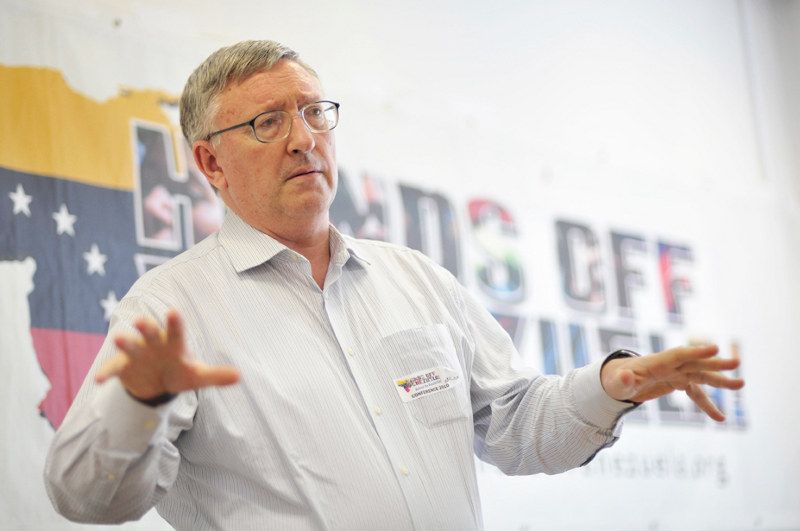 As well as answering the attacks of the right wing in Venezuela extensively last week, Alan Woods issued a press release, which was published in full today in Spanish by Vea, one of the main Bolivarian daily papers. We publish it here in English for our readers.

On 4th November Ramón Muchacho held a press conference in which he referred to me as “and the main ideologue of the ruling party" and “the chief ideologue and adviser to the President”. These claims have been repeated in the media over recent weeks.

There is not an atom of truth in these assertions. I am not, and never have been, an adviser, either formal or informal, to the President of the Bolivarian Republic. I do not advise President Chavez or anybody else. I merely express my opinions, which one may accept or reject. And I am as entitled to express an opinion about Venezuela as is Mr. Muchacho is to express an opinion about Alan Woods – which he has done, very imaginatively.

I have written extensively on Venezuela from a Marxist standpoint. I have consistently defended President Chavez against the spiteful and biased attacks of the imperialists and the counterrevolutionary opposition. I am a firm supporter of the Bolivarian Revolution, but I am entirely independent of the Bolivarian, or any other, government.

The lies about “foreign advisers” is a clumsy attempt to draw attention away from the well documented links of the opposition to their advisers in Washington and Miami who decide everything they say and do.

Mr. Muchacho is opposed to the Bolivarian Revolution and President Chavez, which he wishes to overthrow by any means possible. The latest orchestrated campaign in the media is the latest episode in a scandalous campaign to discredit the President and destabilize the democratically elected government of Venezuela.

My only “crime”, from the standpoint of the opposition, is that I have consistently defended Chavez and the Bolivarian Revolution against imperialism and the counterrevolutionary oligarchy.

While disseminating the legend of “foreign advisers to Chavez”, they are silent on the role of the CNN and the bourgeois media internationally who every day for over a decade have been organizing a violent campaign of lies and vilification against President Chavez, including calls for his overthrow and assassination. This kind of foreign interference in the internal affairs of Venezuela meets with the enthusiastic approval of the opposition.

I take the opportunity to point out that if any journalist in Britain or the United States called for the violent overthrow of their government and the assassination of the head of state he would soon find himself on trial.

Mr. Muchacho claims that I wish to push Venezuela into “communism”, like in Russia. That is another lie. The people of Venezuela will adapt their model of socialism to their own wishes, traditions, history and national character.

Moreover, it is a matter of record that I have always been opposed to the bureaucratic and totalitarian caricature of socialism that Mr. Muchacho (incorrectly) calls “communism”.

I stand for democratic socialism, based on the democratic control and participation of the working people at all levels. But the attachment of Mr. Muchacho and the opposition to democracy is not so clear. They have never accepted the popular will, and still do not accept it.

The opposition pretends to “defend the Constitution”, but in April 2002 the first act of the counterrevolutionary coup was to abolish the Constitution and sack and arrest the ministers of the elected government. Everybody knows that this coup was actively backed by the opposition and FEDECAMARAS.

The leader of Primero Justicia claims to be defending the middle class and says that the Marxists (and by implication Chavez) want the “nationalization of everything”. That is another lie. I call for the expropriation of the big landowners, banks and capitalists as the only way to defend the Revolution. But I am opposed to the expropriation of small businesses.

I approve of the expropriations carried out by the Bolivarian government. But to approve of something does not necessarily mean that I am responsible for it. I approve of Darwin’s theory of evolution, but had no hand in the writing of The Origin of Species.

Everybody knows that the main problem in the Venezuelan economy is the lack of private investment. This amounts to a strike of capital, which is having a most negative effect (falling investment, flight of capital, factory closures, inflation and unemployment).

At the same time the capitalists are sabotaging the economy, their political representatives are trying to create an atmosphere of fear in order to destabilize the democratically elected government. The campaign against alleged “foreign advisers” is only a part of this strategy.

I believe that the Bolivarian Revolution has now reached the critical point where it will be forced to take serious decisions. Either it will accelerate the revolutionary process, which means liquidating the economic power of the oligarchy once and for all, or it will face very serious dangers.

The reason the opposition is raising the spectre of “communism” and slandering the most consistent supporters of the Revolution is that it is trying to split the Movement. They know that if they can isolate and destroy left wing, they will deprive the Revolution of its most determined and militant wing.

The aim of these intrigues is to divide the Movement, to make it abandon its socialist aspirations and enter into pacts with the counterrevolutionary bourgeoisie.

If they succeed, the balance of the Bolivarian Revolution will tilt sharply to the right, leaving the road clear for the reformists, who have never been in favour of socialism and who dream of “Chavism without Chavez” to take control. The real target of these attacks is not Alan Woods and the International Marxist Tendency. It is Hugo Chavez and the Bolivarian Revolution.

This would fatally weaken the Revolution and demoralize its real base, the workers and peasants. It would guarantee the victory of the opposition in 2012 and prepare the way for counterrevolution.

Gentlemen, your manoeuvres are transparent. You will not succeed! As the President has said: "For this revolution there is no turning back, here there is no pact with the bourgeoisie, never again." "There should be no place in our military or civilian life for half measures. A single line: radicalize the revolution." 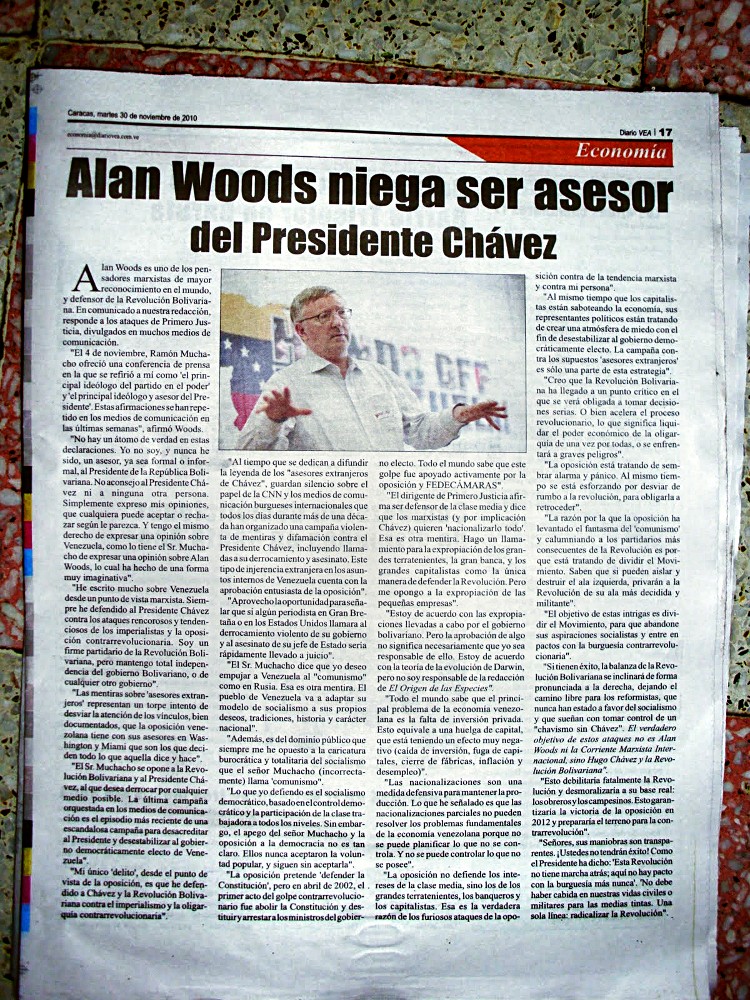