Details
our correspondent in Cuba
21 February 2007 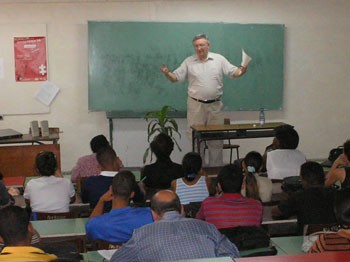 The meetings were held on Tuesday 20th February, one in the morning and one in the afternoon. The first meeting, attended by about 60 students and teachers of the Department of Social Sciences, was on Venezuela.

Alan gave a brief outline of the Venezuelan Revolution, in the context of the general world situation after the collapse of the Soviet Union. He emphasized that capitalism offered no way out to humanity, and stressed that a return to capitalism in Cuba would be a disaster for the Cuban people. 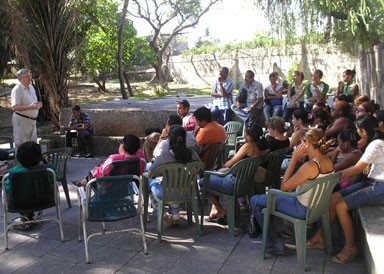 In his speech Alan stressed the role of the masses in the Venezuelan revolution and pointed out that the workers and peasants had saved the revolution at every decisive turning point. He pointed out the vital role of workers' control and the need for workers' democracy and a struggle against bureaucracy on the lines of the programme of Lenin in 1917.

Alan also stressed that despite the undoubted advances of the revolution, it was not yet finished and that it was necessary to nationalize the land, the banks and the key industries. "All history shows that it is impossible to make half a revolution," he said, citing the examples of Chile and Nicaragua as proof of this.

After a short video show about the international Hands off Venezuela campaign, there were a number of questions and contributions that indicated a lively interest in the subject under discussion. 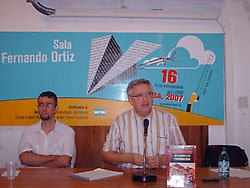 Asked about the role of the Communist Party, Alan pointed out that in Venezuela, as in many other countries of Latin America, the Communist Parties had pursued the false Menshevik-Stalinist theory of the two stages, which limited the revolution to bourgeois democratic demands and relegated socialism to a distant future. Chavez, through his own experience, had come to understand the impossibility of carrying out his programme under capitalism and had posed the question of socialism, but this was being hampered and resisted by the reformists and bureaucrats.

Alan once again made a sharp criticism of the former Marxist Heinz Dietrich for his reformist interpretation of socialism of the 21st century. "This is only capitalism with another name," he said.

The speaker spoke ironically about the "New Left" in Latin America and Europe who continually spoke about the need for new ideas and rejected Marxism as old fashioned. "We do not need to reinvent the wheel", Alan said. The ideas of Marxism were fully relevant and what was needed was to fight for Marxism inside the United Socialist Party, which must be democratic and controlled by the rank and file.

In the afternoon, comrade Woods spoke to another meeting of about 40 students and teachers in the Plaza de la Cultura. This time the subject was his book on the history of the Bolshevik Party, Bolshevism the road to Revolution, which he presented at the Havana Book Fair in a very successful meeting last week.

Alan stressed that the idea that the Bolshevik Party was the same as the Stalinist monstrosity of later years in the USSR was completely false and a slander against Lenin's party. "The Bolshevik Party was the most democratic party in history," he insisted. The entire history of the Party was one of the free struggle of tendencies and ideas, which was the way in which it developed correct ideas, policies and tactics.

Alan traced in outline the history of the Party from its inceptions through the first revolution of 1905, the period of reaction, the revival, the First World War and the October Revolution. He emphasized the anti-bureaucratic nature of Lenin's programme in 1917 and related this to the struggle against bureaucracy in Cuba, which was a necessary part of the fight to defend the Cuban revolution against capitalist restoration.

"This book is not just about the past but about the present and the future," he said. "It is necessary to recuperate the ideas, methods and traditions of Bolshevism and hand them down to the new generation that is trying to find the road to the socialist revolution", he concluded.

There were some questions raised afterwards. Someone asked about the relations between Lenin and Rosa Luxemburg. Someone else asked Alan what other books he was planning to write. Here, as in Havana, comrade Woods' books have been very well received and people eagerly await new titles. All the copies of the Bolshevism book that were on sale were sold out and more than one person was left without. These meetings in Santiago, the historic birthplace of the Cuban Revolution, showed yet again what a thirst for Marxist literature exists in Cuba.