Share
Tweet
Alan Woods is presently on a speaking tour of Italy organised by Hands Off Venezuela-Italy and the Marxist tendency FalceMartello. There is keen interest in hearing a Marxist analysis of the events taking place in Venezuela as the successful meetings so far held clearly demonstrate. See also the picture gallery.

“Marxism is more relevant than ever”

The beginning of Alan Woods’ tour in Italy could not start better. Alan is presently in Italy speaking on the revolution in Latin America and Venezuela, in a tour organised by Hands Off Venezuela (Giù le Mani dal Venezuela) Italy, and by the supporters of the Italian Marxist tendency, FalceMartello.

The first meeting was held in Modena last Saturday. More than 80 people were present, including several workers and shop stewards from the most important factories in town, such as Ferrari, Maserati, Terim, Smalti Modena and PFB. 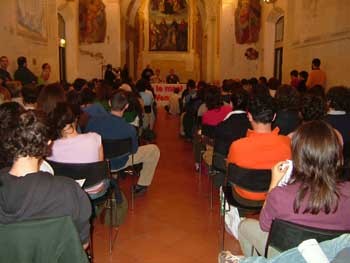 Alan, starting from the revolutionary events in Venezuela, underlined that communism is more valid than ever, despite the fact that the reactionary campaign of the bourgeois media advocates exactly the opposite. He added that the working class on the one side and the revolutionary party on the other are the main ingredients for a victorious revolution and that it is our task as communists, workers and youth, to build such a party.

The meeting ended in enthusiasm, with the crowd joining an old comrade who started singing “Bandiera rossa” [the Red Flag in Italian]. All the older comrades of the PRC (Rifondazione Comunista) were very moved. Most of them had been in the partisan movement during the Nazi occupation. They had to confess that they had to go back many years to remember a meeting with such enthusiasm for communist ideas, inside and outside the Prc. At the end 180 euros were collected for the HoV campaign. 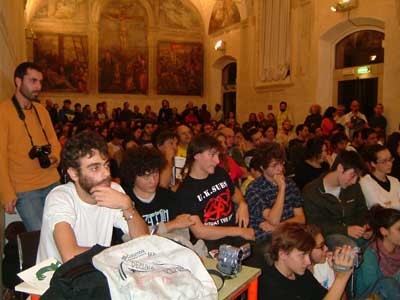 On Monday the tour moved to Trieste in the Northeast, on the border with Slovenia. In a meeting organised at the University, “The Venezuelan revolution and the relevance of Marxism”, 45-50 people attended, mostly university students, but also rank and file members of the local PRC.

The debate was very interesting. Some comrades asked about what might happen in Venezuela if Chavez were killed. Alan replied that plans certainly have been made to assassinate the president, but this would not be the end of the story. The most likely perspective is that the masses would react with anger and carry the revolution to the end, smashing in a decisive way the oligarchy and imperialism. At the end of the meeting, 140 euros were collected for HoV. 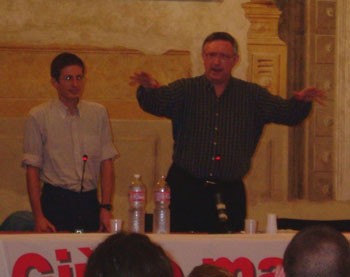 Last night’s meeting in Bologna, organised not only by ourselves but also with the help of the local Federation of the PRC, was historical for HoV and the Marxist tendency in this city. More than 200 hundred people packed the meeting hall. There were workers, shop stewards, youth, an audience made up not only of left-wing activists but also of ordinary men and women. A special mention should be made of the students of the CSP (Committees in Defence of State Education) who were able to mobilise more than 50 high school students to attend the meeting.

Some Venezuelans were also present and spoke in support of the Bolivarian revolution. 300 euros were raised and more than one hundred people left their phone numbers or email addresses so they can be involved the HoV committees. 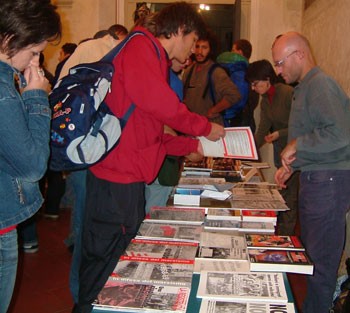 In his conclusions, Alan Woods stressed the fact that for a successful revolution to take place two elements have to be present, a favourable objective situation and the subjective factor. The objective situation is already favourable in Latin America and is reaching a turning point in Europe as well. What is lacking is the subjective factor, the revolutionary party that Alan urged everyone to build. We are confident after these meetings that we are on the right path.

Alan’s tour is not finished. Today he is speaking in Florence, while tomorrow and Friday he will be one of the main guests at the Fourth Meeting of Artists and Intellectuals in Defence of Humanity, which is taking place in Rome.

On Saturday, he is heading south, with meetings in Caserta, Rome, Naples and Messina. The closing meeting will be back in the north, in Milan on October 19. For more information, see www.marxismo.net.