Details
In Defence of Marxism
20 February 2006

Cuba
Share
Tweet
The last leg of Alan Woods’ speaking tour of Cuba was in Santiago de Cuba. He spoke at two meetings at the Universidad de Oriente. There was keen interest and people noted the difference between genuine Marxism and the stale old Soviet manuals. A large part of the discussion was dedicated to the situation in Venezuela. Alan insisted that the revolution in Venezuela “will not be completed until a radical expropriation of the capitalist class takes place”.

The last leg of Alan Woods’ visit to Cuba was in Santiago de Cuba in the eastern part of the island. As many people there pointed out to us, Santiago’s revolutionary traditions are second to none on the island. All popular revolutionary movements have had its starting point in this city, which has rightly won the title of being “heroic”.

The meetings here were organised on the initiative of university teacher Frank Josué Solar, of the Social Sciences Faculty of the Universidad de Oriente, and had the official backing of the Faculty and its Departments of Philosophy, History and Marxism.

A heroic city with a proud revolutionary tradition 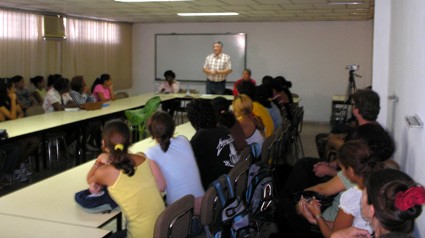 Launch of Venezuelan Revolution book
We arrived in Santiago on Tuesday, February 14, and the Vice-Dean of Investigation of the Faculty received us at the airport. In the afternoon we toured the city, including the Santa Ifigenia Cemetery, where we visited the José Martí Mausoleum and the tombs of Frank and Josué País.

José Martí (1853-1895) was Cuba’s greatest fighter for independence and he was clear in giving a social character to the struggle for independence in his famous verse “Con los pobres de la tierra / quiero yo mi suerte echar” (With the poor of the Earth /I want to throw in my lot).

Frank País (1934-1957), a santiaguero, was the main leader of the urban underground of the July 26 Movement. His powerful underground network organised the uprising of November 30, 1956 in Santiago, which was supposed to coincide with the landing of the Granma expedition. He was killed by Batista’s agents on July 30, 1957, at the young age of 23. The whole of Santiago de Cuba paid homage to him with a spontaneous general strike which paralysed the city and thousands attended his funeral procession, with Batista’s police officers and soldiers forced to withdraw to their barracks.

The first meeting was in the morning of Wednesday, February 15. The meeting took place at the Mella campus of the University. Julio Antonio Mella (1903-1929) is one of Cuba’s most outstanding revolutionaries and one of Latin America’s foremost Marxists. He was one of the founders of the Cuban Communist Party in 1925 and always defended a policy of class independence and of linking the struggle for national liberation to the struggle for international socialism. This policy was to be abandoned later on by the party when it adopted Stalin’s Menshevik policy of the two stages and support for the so-called “national progressive bourgeoisie”. This led the PCC to support Batista and even hold to ministerial posts in his first government. During his trip to Moscow in 1927, as a delegate to the IV Congress of the Red International of Trade Unions where he met with Andrés Nin, then a member of Trotsky’s Left Opposition. Mella adhered to the views of the Left Opposition and reaffirmed his own ideas on the role of the working class as the sole guarantor of the success of the national liberation struggle in one of his main works ¿Qué Es el ARPA? After his assassination in Mexico on January 10, 1929 (when he was only 26), his political friends and comrades in the Mexican Communist Party (PCM) went on to form the Left Opposition in the PCM. 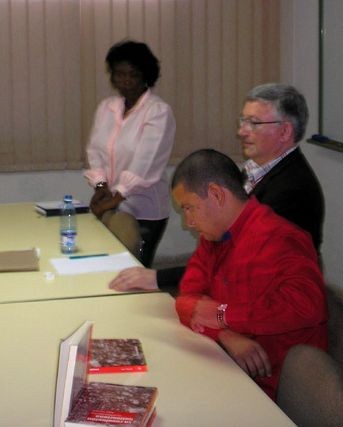 The meeting at the Mella Campus was organised to present Alan Woods’ book The Venezuelan Revolution – a Marxist perspective which has just been published in Spanish by the Frederick Engels Foundation. The meeting was attended by 50 people and chaired by Diana Sedal, Dean of the Social Sciences Faculty. Then Frank Josué Solar, a teacher at the Faculty introduced Alan Woods and the book. He stressed that Alan Woods “writes not just as an intellectual, but as an active participant in the revolutionary struggle, being a leader of the International Marxist Tendency which is present in more than 30 countries”. Frank explained Alan Woods’ interest and participation in the Venezuelan Revolution and how he was the founding sponsor of the Hands Off Venezuela campaign back in 2002.

Frank also pointed out how Alan Woods and the IMT had stood firm in the defence of the Cuban revolution, even at the time of the execution of the hijackers in 2003, when even some former “friends of Cuba” joined the hypocritical hue and cry of the imperialists. “At that time, Alan Woods and Roberto Sarti wrote an article Cuba: Executions and repression - a class point of view in which they made clear their defence of the Cuban Revolution,” said Frank.

“One of the things that stand out in the book”, he explained, “is that Alan has consistently put forward the idea that the best way to defend the Venezuelan revolutionary process is for it to go forward towards socialism”, and that this was Alan’s position “even before Hugo Chavez made his memorable speech at the World Social Forum, where he said socialism was the only way forward”. “The role of a revolutionary intellectual is not to trail behind events, or to give uncritical support, but to try to comment on the process and propose ways to advance it”, he added, “and it is clear that the Cuban revolution can only consolidate itself by taking anti-capitalist measures”. 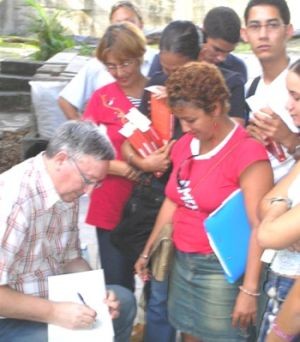 In his very detailed introduction, Frank also stressed that “it is impossible to consolidate a revolution in isolation, socialism can only finally triumph as a worldwide system”.

Commenting on Chavez’s idea of “socialism of the 21st century”, Frank said that we must learn from the experiences of the past, and we must “drink from the sources”. “Socialism can only be based on democracy and direct participation of the working class”, he said, and went on to cite the experience of workers’ control in Venezuela as an example of this. “In Inveval the workers in mass meetings are taking the decisions, they are not capitalist shareholders”.

Amongst the many points that Alan Woods made in his speech, he stressed that, “Bolivar fought for the integration of the continent, but two hundred years have shown that this is not possible under capitalism… The oligarchy and the capitalists betrayed Bolivar and have Balkanised the continent… keeping it under imperialist slavery… There would be limitless possibilities for a united Latin America under a socialist economy… and this would be the first step towards a world socialist federation”.

“The current process of heightening of the class struggle in Latin America is very important for Cuba” said Alan, “ since it raises the possibility to break with isolation”.

Alan replied to those in Europe and elsewhere who question whether there is a revolution taking place in Venezuela by quoting from “a book that Che Guevara carried in his rucksack in his Bolivian guerrilla expedition… Trotsky’s History of the Russian Revolution which in its introduction describes revolution as that moment when the masses start to participate directly in history”. 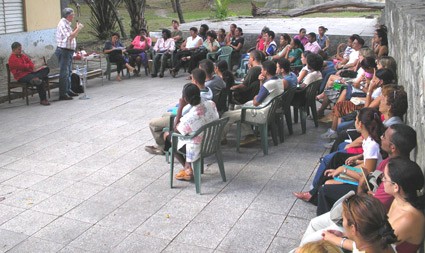 Finally Alan Woods insisted that the revolution in Venezuela “will not be completed until a radical expropriation of the capitalist class takes place” and warned of the dangers of “making half a revolution” which could lead to demoralisation amongst the masses.

There were a number of interventions by teachers and students, all of whom said they were very pleased with the meeting. One of them asked whether the talk of socialism of the 21st century was not a way of saying “that there can be socialism without socialist revolution”. Alan replied that the phrase is interpreted in different ways by different people. “To Chavez it clearly means socialism without bureaucracy, but there are other elements who want to water down any reference to socialism” he said. “It is clear that the final outcome of the revolution will be decided through an internal class struggle within the Bolivarian movement” and Alan pointed out that, “the fundamental task of the Venezuelan Marxists of the Revolutionary Marxist Current (CMR) is to participate in the movement while pointing out at every turning point what is needed”.

Chavez has raised the issue of the danger of bureaucracy for the revolution, and Alan stressed that, “the only way to fight against bureaucracy was through direct control of the leadership on the part of the rank and file workers and peasants”.

Launch of “Reason in Revolt”

In the afternoon there was another meeting. This time it was in an open air space next to the Library on the main university campus. The comrades explained to us that it was in the upstairs room of this library where the first session of the Revolutionary Government had taken place after the victory in January 1959, and how this first government was full of bourgeois figures that gradually abandoned ship as the revolution adopted a more radical character. 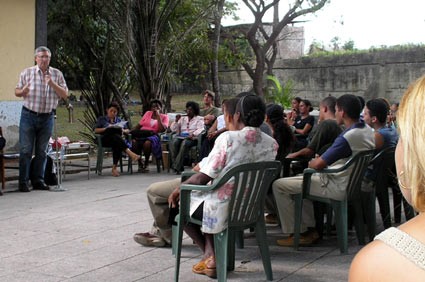 In the presence of nearly 100 students and lecturers Alan spoke to a captivated audience on dialectics and their relevance to modern science. He stressed that dialectics has nothing to do with the Stalinist caricature that was presented in the Soviet manuals of so-called “Dialectical Materialism” (DiaMat). Some of those present commented afterwards how they were pleasantly surprised to find that you could get the younger generation of students genuinely interested in the ideas of Marxism, and how Alan’s speech was far removed from the dry, boring and stale “Marxism” that had been taught in Cuba for so long.

The meeting was a success and 33 copies of the Cuban edition of Reason in Revolt were sold alongside 20 copies of the Venezuelan Revolution book.

The following day, before leaving for Havana we had the chance to visit the Moncada Barracks. They are now a Museum with exhibits on the actions of a courageous group of young revolutionaries that in 1953 assaulted the barracks in a failed attempt to distribute arms to the people in the struggle against the Batista dictatorship.

We would finally like to thank the University and particularly the Dean of the Social Sciences Faculty for their kind invitation and their warm hospitality.