Share
Tweet
Last night Alan Woods concluded his speaking tour of Italy with a lively meeting in the CGIL headquarters in Milan. The local Milan PRC collaborated in organising the meeting and the party’s parliamentary group leader, Gennaro Migliore, also spoke. Over 150 people turned out to discuss the Venezuelan revolution.

Over 150 people attended the last meeting of Alan Woods' speaking tour in Italy. The meeting, which was organised with the official participation of the Milan PRC, was held at the Chamber of Labour (the CGIL's headquarters). Comrade Gennaro Migliore, leader of the PRC parliamentary group, also participated in the debate. Migliore, who we thank for taking part, opened his remarks by stressing the need for a widespread campaign of counter-information on the situation in Venezuela, which is still reported on, especially by daily papers such as "Repubblica" and "Corriere della Sera", in substantially the same manner as the counter-revolution in Venezuela.

"It is not by chance that the question of the media appears repeatedly in these debates and also in the meetings with the intellectuals. Personally I witnessed the incredible level of misinformation on the news programmes of the private TV channels in Venezuela that were broadcast during the 2002 coup. There were titles such as ‘President Carmona has begun consultations to form the new government'. There wasn't one word on Chavez, as if he had never existed except in a dream."

"It is true," Migliore underlined, "that today within the Latin American left there are two distinct positions, personified to a degree by Lula and Chavez. But this has not stopped Lula from supporting Chavez, particularly after the 2004 referendum. With all the unresolved contradictions, we still have to make sure that Lula is re-elected." 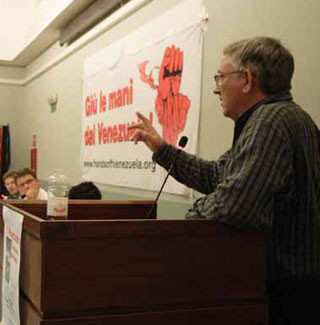 Migliore said, "Even if we have many political differences it is necessary to discuss among ourselves, as we are doing this evening, on the wider perspectives for the movement." We firmly agree with this appeal.

Alan's intervention outlined the more critical phases of the revolutionary process, from the 1989 Caracazo to the 1998 elections, from the coup to the bosses' lockout in 2002-2003, up to the recall referendum that Chavez won in August 2004. "I believe that referendum was an important turning point. It was shortly after that that Chavez publicly announced that he considered himself a socialist and that he rejected the so-called ‘third way' half way between capitalism and socialism, that he had previously attempted to follow."

Alan explained that it was a mistake not to take advantage of the defeats suffered by the counter-revolution over the last few years to complete the revolutionary process. "I am aware of the fact that inside Rifondazione there has been a lot of debate about the revolution and violence. On this question I would like to point out that if after the defeat of the coup and the oil stoppage Chavez had acted decisively, they could have expropriated the oligarchy and completed the revolution without any violence or bloodshed, because the bourgeoisie was too demoralised to react."

"With the December presidential elections the revolution will reach a critical point. I am certain that Chavez will win, but I also think that at the last minute the bourgeois opposition will withdraw its candidate, as it did in the last legislative elections. This would mean it would be preparing to fight the legitimate government with extraparliamentary methods. We will have reached a crossroads: either the revolution is carried out to the end or it will be in serious danger."

With this meeting we have brought to a close an extremely demanding campaign, one that we are very satisfied with. We would like to thank all those many comrades that gave their energies to organise the various meetings. In eight meetings Alan spoke to 850 people and many of these contributed financially to the campaign. They also expressed their desire to continue the discussions and to take part in future initiatives. But above all we concretely saw how the growing interest in the events taking place in Venezuela and Latin America goes hand in hand with a desire to return to discussing Marxism, the class struggle and revolutionary perspectives also in this part of the world. And this clearly augurs well for our future work.