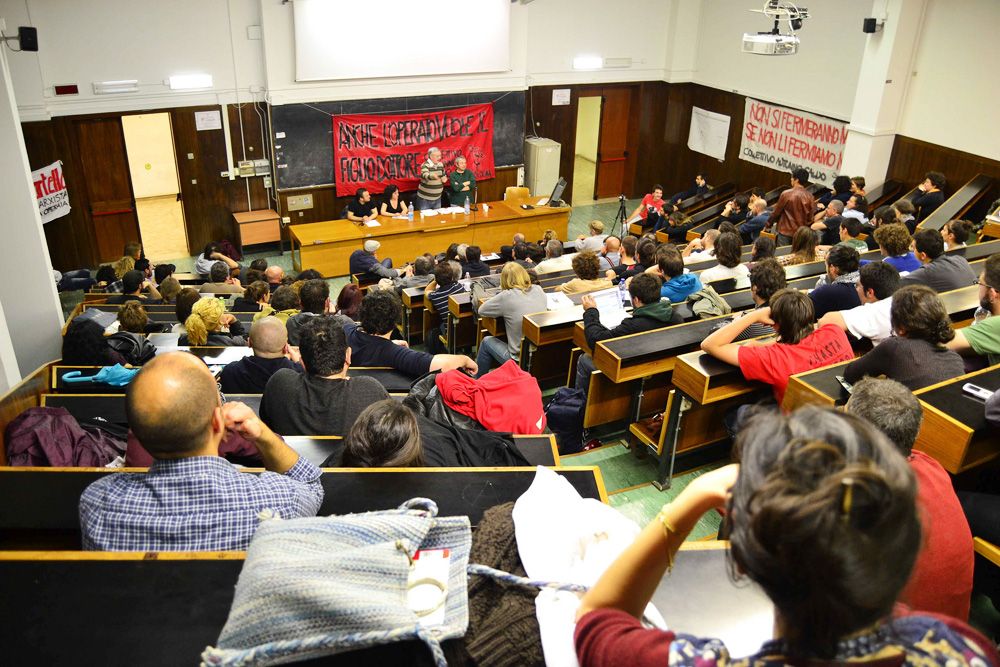 More than 500 people attended five meetings in five cities during Alan Woods ‘recent and very successful tour of Italy.  The subject of the meetings was “Marxism and #occupy” – a very relevant issue at the present time in Italy and many other countries. In preparation for the meetings, the supporters of FalceMartello, the paper of the Italian Marxists, published in the form of a booklet a translation of the introduction written by Alan for a book on Marxism and anarchism printed by the US Marxists.

A  report of the first meeting in Milan has already been published in English on Marxist.com ("Italy will be like Greece"- great start in Milan for Alan Woods' speaking tour). At this meeting, held in the Università Statale, over 120 people gathered to hear the leadoff and discuss with the editor of Marxist.com. In this and every other meeting, the thirst for ideas that exists in the Italian youth and labour movement expressed itself in very enthusiastic and lively debates.

The meeting was held in Genoa on Saturday May19, was attended by 40 people, mainly workers and activists of the PRC.  Alan analyzed the causes of the economic crisis and the need to nationalize the key sector of the economy as the only solution to the upward spiral of the capitalist debt. Many contributions focused on the failure of the left in Italy, and particularly of the PRC, to provide a viable alternative for the growing disillusion of large layers of workers and youth. Alan replied stating that the main problem of the left in Italy was the collaboration with the Prodi government and the illusion that reformism and Keynesianism could provide a solution to the impasse of the system.

Bologna on Monday 21 saw  the biggest event, with more than 150 people in attendance. They were mainly youth, but there were a good number of workers and shop steward in the meeting that was held in one of the main University halls. The main topic of Alan’s speech was that the wind of revolution that began with events in the Arab world was spreading to Europe, the USA and the entire world. 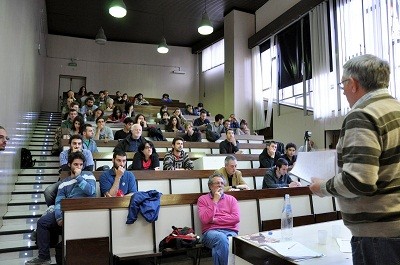 Rome“What was lacking in the Egypt or Tunisia revolution and what is lacking today in Europe?” Alan asked. And he answered: An organization with a revolutionary perspective and programme. Answering the argument of those in the #occupy movement who think that “we don’t need old ideas, we need new ones, we need to improvise”, Alan said: “the class struggle is a war, our enemy is prepared and ready to fight to the end. We need to learn and to keep alive in an organization all the history and the traditions of the workers ‘movement, in order to be able to use all this experiences to lead the working class to victory.”

His view was shared by the best elements, such as two young shop stewards from Ferrari and from an other metal workers factories of the area.

In Rome, despite the pouring rain that battered the capital for the whole day, 80 people turned up at the meeting organized at La Sapienza (the biggest university in Europe) organized by FalceMartello, together with “Collettivo Stella Rossa”, a Marxist-oriented student committee.

On this occasion Alan said that, while supporting 100% the demonstration of the #occupy movement, it was necessary to underline some of its limitations. The blanket rejection of political parties could lead to dangerous consequences. A lot of young people detest the existing political parties, but the alternative is not the refusal of every organization, but the transformation of the left wing and workers’parties into militant tools for the overthrow of the capitalist system. “I quite understand this, Alan said, but he added: “Does anyone seriously think that the alternative to a pair of shoes which pinch your feet, would be to walk barefoot?”

He also criticized the method of “consensus” which dominated most of the meeting of the “indignados” in Spain or of Occupy Wall Street. “There is someone that is against the method of voting at the end of a meeting because it is “a tyranny of the majority”. But Having endless meeting without any decision taken it  leads to a Tyranny of the minority” . He counterposed the workers’ democracy: “when workers meet to discuss an strike, everybody’s free to argue his case, but when a decision to strike, the minority accepts the decisions of the majority. Who does not obey, is considered by the workers a strikebreaker.”

On Wednesday the 23rd May the last meeting of the tour was held in Naples, in the university. The room was really packed, with standing room only. About 100 students attended, but also some of the best worker activists, shop stewards from Pomigliano and some  of the big southern town of the Italian peninsula, and a prominent leader of the popular movement in Bagnioli, the proletarian heartland of Naples. 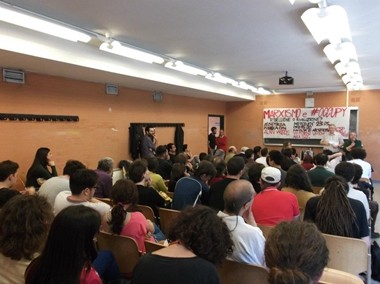 NaplesAlan warned the people gathered: “Italy can see its future in today’s Greece as in a mirror. But this does not apply only to the worsening of the living condition of the masses, but also to the development of the class struggle, that will follow the same line.”

In every meeting the question of solidarity with Epanastasi, the Greek Marxist tendency of Syriza, was raised. The response was very good: more than 200 euro were raised in the 5 meeting, and more initiatives are about to come.

All the speakers who intervened agreed with Alan’s approach, in a lively debate where Alan was questioned about what programme we need to defend workers rights, the question of the debt, and the relevance of Marxism today.

Alan’s speech and his reply had the effect of enthusing all the people who attended, as in every other meeting. “I have a challenge for you,” he said at the end. “Find another book that is more modern than the communist manifesto, written more than 150 years ago. All the bourgeois books written at that time have a mere historical interest. Marxism interprets the world today like no other idea. But to change it we need all of you. I invite you to join Falcemartello and the Imt in our struggle to change society.”

We are committed to carry the banner of Marxism in this country now more than ever!