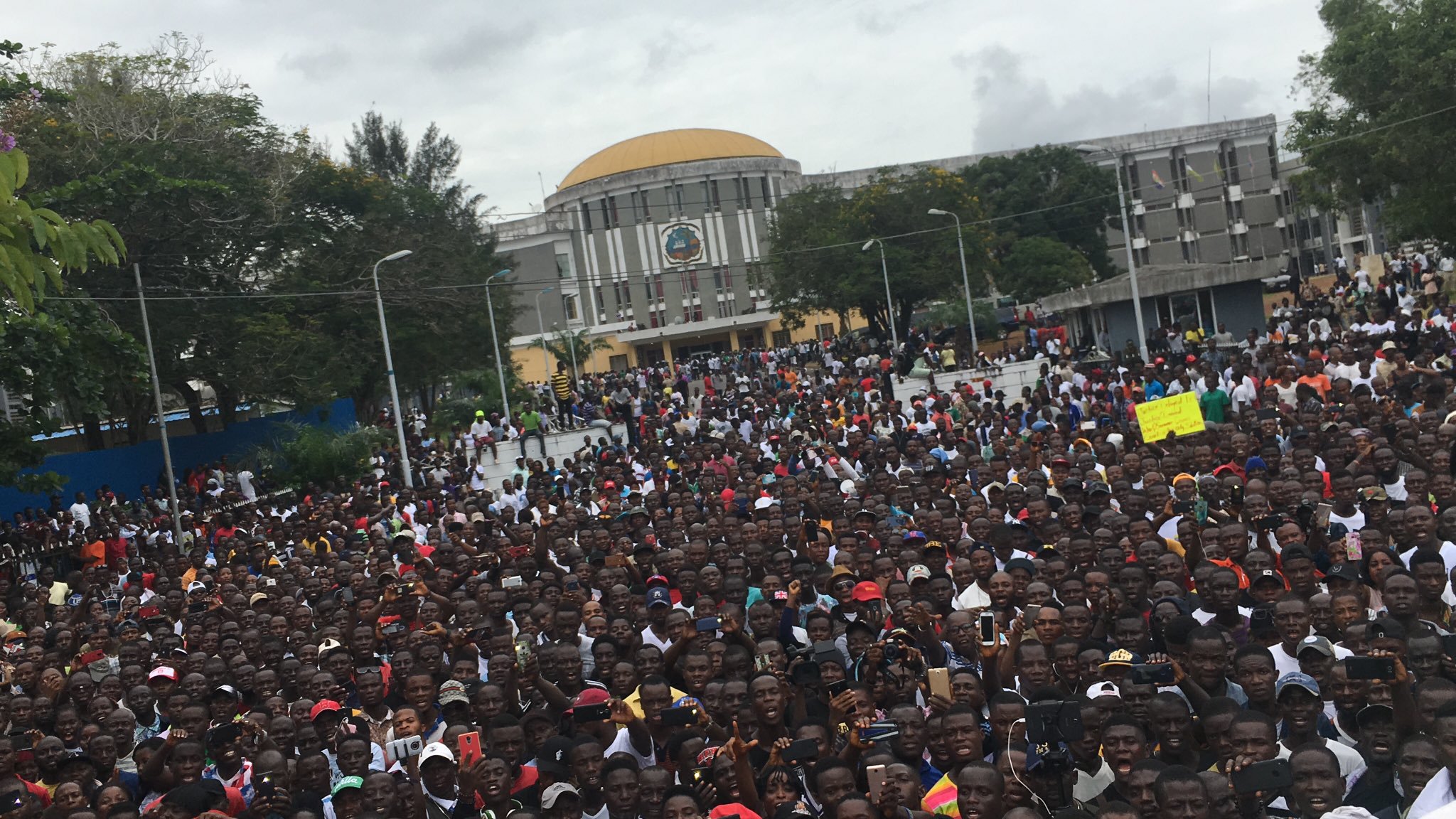 The spark of 7 June has ignited the contradictions in Liberian society. The massive mobilisation of the masses last Friday was a slap in the face for the cynics who argued that the Liberian people would continue to blithely accept the rotten status quo without acting to change the course of history. But nothing is stagnant: everything is in constant flux and subject to change. So too is the consciousness of the Liberian masses.

For 12 years, they patiently tolerated Ellen Johnson Sirleaf. But their patience came to an end for the Weah government before two years elapsed. As Lenin said: "There are decades where nothing happens; and there are weeks when decades happen.'' This was demonstrated by the Liberian masses on 7 June. This upheaval of the masses involved the participation of the workers, urban poor, old people, youth, students and sections of the petit-bourgeoisie. There were Liberians from all sixteen tribes and all religious groups in the country, who powerfully entered the scene of history.

The largely peaceful protest was called by the Council of Patriots (COP) in defiance of years of austerity, privatisation and the mortgaging of Liberia’s natural resources to international capital; in addition to declining standards of living, systemic corruption, a spate of thefts on an industrial scale, disinvestment during the current administration, and the obscene levels of incompetence that have characterised the Weah-led government.

By the year 2013, the Liberian economy had an annual growth rate of more than 8 percent – a growth in GDP that was not reflected in the material conditions of workers, youth, urban and rural poor due to the logic of capitalist imperialist domination. But in 2014, this increase in GDP was reversed and placed the economy on the brink of collapse as the result of three fundamental factors.

The masses have erupted against the regime of George Weah / Image: fair use

Firstly, there was a drop in commodity prices (including for iron ore and rubber, Liberia’s main exports) as the result of a fall in demand on the international market. Secondly, the Ebola outbreak in West Africa badly hit the country economically by not only scaring away new capital investment but also withdrawing existing investments. And finally, the drawdown of the United Nations Mission in Liberia (UNMIL), which led to a drop in foreign currency supply and thus the further depreciation of the local currency (Liberian dollars) and an inflationary period, which adversely affected the income of workers, peasants and the urban poor, who eke out a living through informal economic activities.

According to an IMF team that visited the country from 25 February to 8 March 2019, concerning the Liberian economy: “Macroeconomic stability has proved elusive despite improved revenue collection in the first half of FY2019, and the fiscal stance has loosened significantly. (...) Growth for 2018 is now estimated at 1.2 percent, while the forecast for 2019 on current policies has been revised down to 0.4 percent from 4.7 percent.

“The mission notes that productive spending is being crowded out by a wage bill, including discretionary allowances that totals about two-thirds of government-funded expenditure.”

The Liberian currency has depreciated by 26 percent in a year and inflation has risen to 28 percent, thus increasing the economic hardship experienced by the exploited layers of Liberian society.

According to a 2018 report from the Central Bank of Liberia (CBL):

In light of such a huge deficit which, as usual, has hindered investment in education, healthcare, infrastructure, electricity, housing, safe drinking water, etc., US$490.3 million was registered as the export value for the country’s major export commodities, including iron ore, rubber, gold, diamond, cocoa and coffee beans, etc. So, while billions are extracted from the nation’s natural resources, the masses are left without the basic necessities of life.

All these factors created an objective basis for the anger expressed during the 7 June movement. The levels of discontent in Liberian society found its expression in a national mood of resistance, showing that the illusions the masses had in George Weah a few years ago have withered away.

Nature of the leadership of this movement (Council of Patriots)

Under the force of the objective conditions described above, as there is a glaring lack of popular mass organisations, coupled with the fact that nature abhors a vacuum, the Council of Patriots has emerged to direct popular anger into protest action against the government. This organisation is a collection of emerging so-called young elites, originating from the Unity Party; junior cadres of the erstwhile Ellen-Johnson Sirleaf’s administration; others from the Liberty Party; a popular talk show host; vestiges of the Charles Taylor regime; a few national lawmakers who have opportunistically positioned themselves to ride the tide of popular anger, and other sycophants spread across the political spectrum. They are all jostling to exploit the popular anger of the masses for their own ends. They have prepared the movement from the beginning for a compromise. They have not been able to come up with any coherent and clear programme that can resolve the most fundamental problems that Liberians face on a daily basis.

It is a truism that, insofar as the struggle for an alternative socio-economic order is not being taken forward by the working class under a clear Marxist leadership, dubious figures and obedient gangsters, who are part and parcel of the establishment—alienated and far removed from the people—will hijack the struggle to promote their own class interests. When the people embark on the task to rid the country of imperialist domination and exploitation, these elites, in collaboration with their puppet masters—whether in opposition or in the ruling clique—will coalesce under the banner of a common front in an attempt to destroy the movement and frustrate any process of national transformation based on socialist principles. This is an iron law of history.

It is therefore not surprising to Marxists that the Council of Patriots has cut off any more peaceful assembly and has given the government a month to respond to the counts in its petition. This is clear evidence that it has no revolutionary programme and is obviously not a revolutionary leadership. The one-month deadline is nothing but a period for negotiation and compromise between the government and COP leadership. But the Liberian masses are at a very critical juncture in history. What brought them out on 7 June cannot be resolved in one month, nor under the capitalist economic agenda of the George Weah regime.

What next after 7 June?

A monstrous threat faces the people today in Liberia from neo-colonial capitalism. This degenerate economic system is distilling poverty and backwardness in society. Unable to govern and lead, lacking the historical itinerary for progressive transformation, this system has become a break on the progress of the nation. In general, the working-class and peasant masses are feeling the pangs of hunger, deprivation and dispossession. These conditions pervade every area of our national life. It is now clear that the idea that Weah had a magic wand he could use to alter the course of history and raise the country to noble heights was a mere illusion, which is being shattered by the day.

In the write-up on the collapse of the Second International, Lenin outlined the conditions for a revolution:

“3) when, as a consequence of the above causes, there is a considerable increase in the activity of the masses, who uncomplainingly allow themselves to be robbed in ‘peacetime’, but, in turbulent times, are drawn both by all the circumstances of the crisis and by the ‘upper classes’ themselves into independent historical action.” (V. I. Lenin, The Collapse of the Second International, May-June 1915)

The revolutionary ferment that has been building up since the reign of Ellen Johnson Sirleaf has finally manifested itself through the bold action of the masses. Their enthusiasm for the transformation of society, into one in which they are at the heart of national life, has been demonstrated through slews of protest actions even before the 7 June rising, including the 24 September protest over billions of missing dollars. The dire economic crisis, coupled with the missing L$16 billion, and the siphoning off of US$25 million are the sparks that have pushed the people on the streets.

There is now a ferocious division within the topmost hierarchy of the ruling elite, as demonstrated by the bad blood between the president and his vice-president. The former has accused the latter of all manner of crimes, from gross insubordination during the early days of the administration to her being a key mastermind of the 7 June protest called by the Council of Patriots (COP).

Protesters dance in front of the Capitol Building, the seat of the legislature. #SaveTheState #Liberia pic.twitter.com/DYg8EurpSy

The subjective factor is glaringly absent in Liberia, as it is in Sudan and Algeria, that is: a leadership armed with a socialist programme, which will guide the people to rise from below to seize the commanding heights of the Liberian economy, extricated from the hands of multinationals. With the people already mobilised, such leadership is necessary to push the struggle of the Liberian masses to its logical conclusion.

At this stage there is a sense of euphoria and excitement at the huge mobilisations. The movement is on the rise. But soon it will become apparent that to remove the present regime more is required, and even then it will become apparent that even once removed, unless a radical change in the economy is carried out, i.e. a socialist transformation whereby the economic resources are placed under the control of the working people, then it will be a case of “everything must change so nothing changes”. All kinds of dubious bourgeois politicians will step in pretending to be “friends of the people”, but with the aim of holding the people back.

If this contradiction is not resolved by building a conscious party based on the ideas of Marxism and winning the support of the workers, peasants and poor, then in the long run the counter-revolution will eventually exert itself with bitter vengeance against the masses. That must not be allowed to happen. Events in Sudan show how far a movement can go, but also how limited it can be if it lacks the necessary revolutionary leadership.