Yesterday we announced the tragic taking of his own life by Comrade Giampiero Palermo, a longstanding comrade of the FalceMartello tendency in Italy. Here we provide an English translation of Claudio Bellotti’s recollections of this comrade of ours: Addio Giampiero.

Giampiero Palermo is no longer with us. He took his life today. I can hardly find words to say goodbye to such an extraordinary and special comrade, and yet even if the words do not come his image is vivid and clear for me. Giampiero was like a crystal, pure and beautiful, which at times would suddenly dim and become impossible for anyone to peer into.

His intelligence was highlighted by an acute sensitivity, anxiety to clarity, sharpness, and clearness. He sought, indeed demanded, absolute loyalty from his collaborators. He could perceive in an instant the slightest element of ambiguity, of conventionality, of hypocrisy and would not tolerate them. He would refuse them outright. He had an unerring perception of people, of their character, their strengths and weaknesses. He was very demanding and was also proud, justly proud, because he was a born leader. 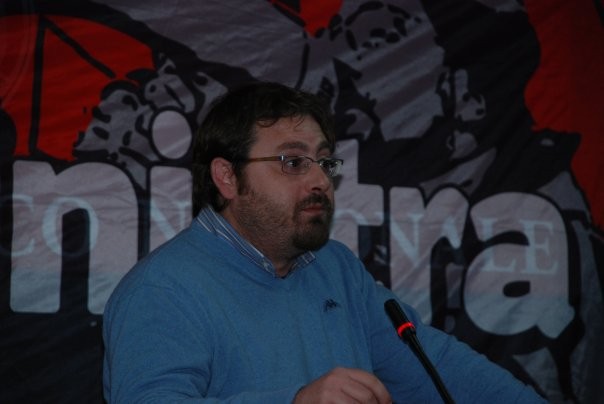 We met him in 1996, at the Third Congress of Rifondazione Comunista [PRC]. It was the first time we were able to attend a national congress and Giampiero was present among the delegates of the party left wing, which we too were part of, a delegate from Calabria, and Cosenza which at that time had produced a remarkable grouping of left-wingers, bringing together a strong core of comrades mainly around the group led by Ferrando. These comrades were opposed to the party embracing the centre-left coalition led by Prodi, which had recently won the elections.

This comrade immediately impressed both Sonia Previato and myself. Sonia in particular discussed at length with him and others. At the time the party badly tolerated internal tendencies, and I remember that the stewards of the Congress tried to prevent us – not exactly with diplomatic manners – from distributing our paper among the delegates. Giampiero and some other members of the “Proposta” Association made a common front with us and eventually we managed to defend our own right.

Giampiero’s political activity in the PRC was born with the party itself; he was one of those young men, one of the most gifted and promising, that in the early 1990s, committed themselves enthusiastically in building what appeared then as an antagonistic force, standing proudly against the mainstream sell-out and moderate stance of the former leader of the Communist Party, Occhetto. The PRC took strength from the youth movements, of which the Unical, University of Calabria, where at that time Giampiero was studying, was an important centre. This was the richer and more gifted generation in the history of the PRC.

His relationship with us did not develop immediately and even stopped for a period. Only a few years later he matured his break with the group of Ferrando and approached our tendency. He was one of our first comrades in Calabria and in general in the South where we were only beginning to build a presence.

Since then, he worked hard to build our tendency in his land, to which he was tied by a close and at the same time suffered bond. He was not afraid to clash with anyone and was vigorous and intransigent when debating, with a moral tension that was apparent in every word and action.

But the toughest battle he had been fighting for so many years was within himself, against a fear that many, too many times made him afraid to be alone, made him lose faith in everyone, even the nearest and dearest. Repeatedly he had to face terrible moments in which ‑ at least this was the feeling that I had ‑ in his eyes the world around him changed aspect; the light turned into shadow, trust into fear, friendship into suspicion. Many times he found himself in the dark, and many times he came out of this with hard work, with the help of extraordinary people who wanted all the good that you may want for a person, first of all his father Antonio, his brother Andrea, and his Lidia.

In the summer of five years ago a severe crisis almost crushed him. When I saw him in hospital my heart sank. I told him, I prayed him, to never forget that he was precious to us all, and he gave me a look that I cannot forget, close and distant at the same time.

He came out of it, but came out wounded. Doctors and medicines, which nevertheless he had to accept, did not convince nor impress him much. Undoubtedly he also suffered much from the political and social environment of recent years. The spread of racism, the social, cultural and ideological rotting of society, could not fail to affect him deeply, as did the state of degradation and confusion of the left and the party, particularly in his homeland.

This last time he did not or could not rise as he had done on other occasions. You have slipped through our hands dear Giampiero, and you have left us here to express words that struggle to find a meaning.

Giampiero Palermo was one of us, one of the best. Those who knew him must keep alive the memory of an exceptional comrade and pass it on to those who did not have the privilege of sharing at least one stretch of road with this wonderful comrade ‑ a road that continues, that we continue to follow united, strong and supporting each other, taking with us the memory of his generosity.

Video: Giampiero Palermo speaks at a national gathering of the PRC Left, December 2008: