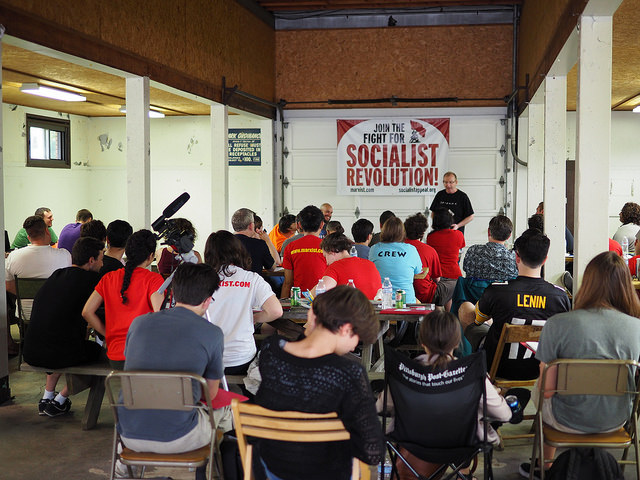 The 2016 National Congress of the US Section of the IMT, held over the weekend of May 28th – 29th, was a genuine milestone in our work.

Just two decades before successfully leading the working class to power and beginning the socialist transformation of society, the Marxists in Russia consisted of a small grouping – smaller than the current size of the IMT in the US today. Before the Bolsheviks could win the working class to the program of revolution, their task was to patiently build their forces and sink roots among the advanced layers of the class. The history of Bolshevism provides us with a rich arsenal of examples and experiences of small forces of Marxists transforming into mass revolutionary tendencies and gaining an ear among broad layers of the working class. Today, using the same basic methods, the forces of Marxism in the US and around the world face the same historical task.

The 2016 National Congress of the US Section of the IMT, held over the weekend of May 28th – 29th, was a genuine milestone in our work. Around 80 comrades and sympathizers of the IMT travelled from a total of 18 cities to Pittsburgh for the largest national event in the history of the organization – the culminating result of two years’ work of branches across the country. The high level of the discussions, the participation of a record number of delegates, and the overall logistical organization of the weekend all attested to the progress and the high level of professionalism achieved throughout the organization in the last period.

Since the start of the year, the branches held thorough discussions on the draft documents for the Congress, including US and World Perspectives for Socialist Revolution, and organizational resolutions, among others. A record number of amendments and contributions were sent in during this year’s lively pre-Congress period, indicating the vibrancy of the branches, which have all undergone significant development over the past period. All this has taken place against a backdrop of a dramatic shift in consciousness in American society.

After several years of closely following the turbulent events around the world and analyzing the political, social and economic crisis of global capitalism, it is clear that the “calm before the storm” in the US has begun to give way to a revolutionary mood among growing layers of society, and particularly the youth. This fact, which has opened up unprecedented opportunities for the growth of the IMT and the spread of Marxist ideas, produced an underlying mood of revolutionary optimism throughout the Congress. 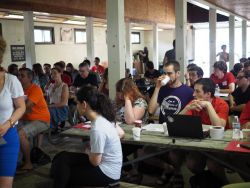 Photo: Socialist Appeal (USA)The first day began with a discussion on Perspectives for World Revolution, based on a document which is being discussed throughout all the sections of the International, and which will be voted on at the IMT World Congress in July. The discussion was led off by Rob Sewell from the International Secretariat in London.

Rob gave an overview of capitalism’s development since the postwar boom and described the processes which prepared the way for the global crisis of 2008 and the new epoch of secular stagnation across the world market. After an extended period of avoiding the worst effects of the crisis by expanding credit, increasing debt, lowering interest rates, printing money and investing in unproductive speculative industries, the ruling class is now faced with the inevitable consequences as the internal contradictions inherent in capitalism are now coming to the fore.

As the global capitalist system lurches from one crisis to the next, the underlying fact that this system has exhausted its historical role becoming increasingly apparent. The fall in productive investment and the staggering amount of industrial capacity that sits idle are indications of capitalism’s inability to take society forward.

The discussion highlighted the internationalism of the event, with comrades present from 10 different countries, with many weighing in with contributions about the class struggle around the world. The comrades raised points about the dire situation facing the international bourgeoisie, the likelihood of a severe global recession in the next period, and the factors which make it impossible for the ruling class to prevent the crisis or resolve its effects. The numerous examples of mass mobilizations and the awakening of the working class in country after country illustrated the nature of the epoch we’re living in: the early stages of the World Socialist Revolution.

Perspectives for Socialist Revolution in the US

The session on US Perspectives was led off by comrade Tom Trottier of the Socialist Appeal editorial board. Tom described the material conditions in the economic foundation of US capitalism, which are producing a major shift in the consciousness of society and the working class and youth in particular, as demonstrated by the political earthquake of the Sanders presidential campaign and the dramatic rise of interest in socialist ideas. The recovery since the 2008 crisis has been the weakest in history and average wages have actually fallen since 2009. Millions are condemned to permanent unemployment and a lower quality of life while the top 500 US companies have cash assets of at least $1.4 trillion in US banks and an estimated additional $2 trillion in offshore accounts. This has led to a burning desire among vast layers of workers and youth for a genuine fightback against the “billionaire class”.

Tom explained that the objective conditions for the socialist transformation of society were ripe over a century ago, yet due to a crisis of leadership, the working class has missed many opportunities to come to power. This protracted delay in the socialist revolution means that there is a widening gap between the immense potential for society to develop and human culture to flourish on one hand, and the restricted realities within the narrow limits of capitalism on the other. This contradiction expresses itself in numerous ways, with elements of the potential for socialist development combined with the effects of decaying capitalist society.

A total of 11 amendments to the US Perspectives document were voted on by the Congress and the discussion was very lively with many delegates expanding on various points such as the relative decline of US imperialism since the height of its dominance after WWII and the concept of “inverse uneven and combined development” to describe the contradictions in society within the context of the organic crisis of capitalism. 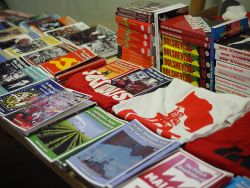 Photo: Socialist Appeal (USA)The last session of the day was an inspiring discussion on the resolution for building the organization, which was passed unanimously by the delegates. Comrades from various branches described their experiences building Marxist student clubs on both university and high school campuses across the country, in order to connect with the growing layers of radicalized youth. Following the discussion about the changing mood in society and given the numerous reports of successes in finding new contacts and selling the Socialist Appeal at recent Sanders rallies across the country, the comrades were filled with a profound sense of optimism and a commitment to redouble our efforts to build the forces of Marxism in the coming period.

The session was concluded with an astounding financial collection of over $30,000 for the organization’s Fighting Fund. This willingness to make tremendous personal sacrifices in order to provide the necessary resources for the organization to develop demonstrated the profound conviction among the comrades for the historical task we have before us. It brought to mind the words of Leon Trotsky when discussing the work of the Fourth International in 1935:

“To the degree that you have a clear theoretical vision of things, you will also have the political will to put it into effect. If you want strongly to succeed in what you understand clearly, then you will also be capable of finding the means.”

The second day of the Congress began with an announcement from the chair that the newest branch of the organization had been formed by the delegation from Louisville, Kentucky. This marks an important step for the organization in securing a foothold in the South/Appalachian region, which is a powder keg of discontent with major implications for the class struggle in the future.

Sunday’s sessions focused on a wide range of organizational and theoretical questions. The weekend’s discussions and debates were filled with a mood of tremendous enthusiasm and camaraderie. A number of the comrades who were attending the National Congress for the first time noted that they were inspired by their firsthand experience of the process of Democratic Centralism in action.

The Congress was concluded with a report of the work of the IMT around the world and closing comments by Rob Sewell, followed by a thunderous singing of the Internationale and Bandiera Rossa. Both evenings of the Congress were filled with socializing and discussion, as well as musical performances and lively singing of revolutionary songs from around the world.

All comrades came away from the event with a stronger conviction in the role the Marxists will play in history and a renewed determination to build the International Marxist Tendency across the US in preparation for the historic tasks before us. Join us in the fight for Socialist Revolution!