Britain
Share
Tweet
In the early hours of this morning (08.10.08), the government and the financial authorities have finally agreed an ambitious plan to save the banks. They present the £50bn bail-out as decisive action to stop the rot. In fact their hands were forced, and there’s no sign that it will stem the panic on UK stock markets in any case.

In the early hours of this morning (08.10.08), the government and the financial authorities have finally agreed an ambitious plan to save the banks. They present the £50bn bail-out as decisive action to stop the rot. In fact their hands were forced, and there’s no sign that it will stem the panic on UK stock markets in any case. 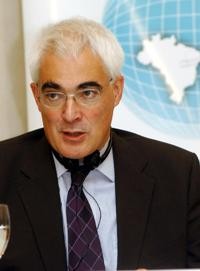 Last Tuesday shares in two of our biggest banks, HBOS and RBS, plummeted by 40%. Let Nils Pratley (Guardian 08.10.08) chronicle the damage. “At the close of trading, Royal Bank of Scotland, a bank that raised £12bn of fresh capital from its shareholders in June, was worth only £18bn.” (That is what the sum total of its shares came to.)  “Shares in HBOS were priced 50% below the value of a bid from Lloyds TSB to buy it.” The banking system faced catastrophe.

Markets had not been impressed by Chancellor Darling’s dithering and evasions in the House of Commons the previous day. He declared that he would do, “Whatever is necessary to maintain stability,” but it would be, “Irresponsible to speculate on specifics.” Throughout this crisis the government has been behind the curve. Two days later, Darling was forced to implement what has been called the ‘semi-nationalisation’ of the banks.

Though details of the plan have not yet been published, the outlines are clear. The core idea is to recapitalise the banks by pumping our money onto their asset sheets. The reaction of the authorities indicates that the problems are worse than they have been telling us. Up to now they have assured us that the banks have a liquidity crisis. This means that they are strapped for cash, but with no more fundamental problems in sight.

The most visible sign of this liquidity crisis is the drying up of inter-bank lending. Though we punters never see this money, it is an essential lubricant of the entire financial system. So just a couple of weeks ago all the major central banks started pumping money into the banking system. The US Fed put $180bn more in and the European Central Bank responded with $110bn extra. It’s not at all clear where all this money went. One thing is for sure. It didn’t work.

So the banks are not just faced with a little temporary financial embarrassment. They have a solvency as well as a liquidity crisis. This is altogether more serious. In plain English they are in queer street. The assets in their vaults that are meant to back up their loans have melted away. Many of these pieces of exotic paper generated in the years of boom and speculation have proved to be valueless. That is why the banks have to be ‘recapitalised’ – with taxpayers’ money.

The banks also faced the danger of a run on deposits of the kind that brought down Northern Rock. The reason for this was the refusal of Brown and Darling to match the deposit guarantees given by Ireland, Greece, Germany and other countries. This inevitably drove savers to abandon UK banks, draw out their cash and put it in a country where it would be safe.

Darling intends to recapitalise the banks. How? By lending them the money! He also plans to buy preference shares in the troubled banks. Preference shares are the first to attract a dividend, so he would argue that he is safeguarding taxpayers’ interests. But preference shares don’t have voting rights. So we are to prop up the banks with no say-so as to how our money is used. This, presumably, is to reassure private capitalists that New Labour is always there to throw our money at them when they are in schtuck. But New Labour will never challenge their divine right to take all the decisions, despite the fact that they have made a total dog’s breakfast of the financial system, and landed us with the bill.

In fact the government had its arm twisted into some sort of action by the collapse of bank shares. As Robert Peston reported, “A gang of three of Barclays, RBS and Lloyds TSB told Darling to pull his finger out and finalise whatever it is he’s eventually prepared to offer on taxpayers’ behalf.” What an insight into our ‘democracy’ – the bankers bully the government into doing what they want!

One of the reasons bank share prices collapsed was because the banks needed the lifeline, but shareholders feared the consequences of government interference. So they sold. Bank profits have collapsed, so no shareholder is likely to be getting a dividend any time soon. Government owned preference shares will be the first up for a pay-out. Do the banks really dare to pay out dividends to private shareholders whose necks have only been saved by public largesse? Bank share prices went down partly because there was no bail-out in sight and partly because there was. There’s no pleasing some people.

Though minor concessions may be made on fat cat pay, effectively the rescue plan is a blank cheque for the bankers. John McDonnell comments, “At a minimum the government must place conditions on any bail-out including full parliamentary and public scrutiny of the banks’ accounts, representation on the boards, no repossession of homes, a pay cap for bank directors and the end of bonus binges, and a reduction of consumer interest rates.” These are indeed minimum requirements to make sure our money is not just wasted. The government has made it abundantly clear that it will impose no such conditions.

In that respect, it’s just like the Paulson plan in the USA reluctantly accepted by Congress. It was accepted because the alternative didn’t bear thinking about. That doesn’t mean it will solve capitalism’s problems. Paulson sets up a ‘bad bank’, a gigantic septic tank, and gives the banks money in exchange for toxic assets which it dumps in it. Brown and Darling just pony up our money direct in exchange for a stake in banks that are leaching losses. It’s the same principle. 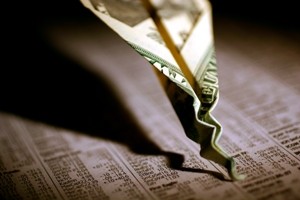 As Joseph Stiglitz says of the Paulson plan it’s, “like providing massive blood transfusions to an ailing patient while vast internal haemorrhaging is occurring. Unless we deal with the underlying source of the problem, the bleeding of our financial system will continue.” He sums up, “The president vetoed a bill to provide health insurance to poor children – costing a few billion a year – saying that we could not afford it. Without needed medical care, some of these children may be scarred for life, and others not live to adulthood.” New Labour shows exactly the same priorities as George W. Bush.

The plan, if it works, is a medium-term project to recapitalise the banks. As long as we have capitalism, we will have banks and they must have adequate capital ratios. But that is not a solution for the present crisis. For a start extreme market turbulence is a global phenomenon. The government can’t turn it around at Dover. In Britain house prices continue to fall. House buying has dried up. House building has almost come to a full stop. Manufacturing output has fallen for the past six months. Unemployment is rising. A full-blown recession is in process – no doubt about it. And that means the financial crisis will go on – and get worse.

Collapsing stock markets are a separate but related aspect of the crisis. Here’s what they do to us. The state pension is a passport to poverty. Decent occupational pensions are becoming a thing of the past. If we can afford it, most of us have to put money aside for private pension provision. Our money is punted at the stock exchange by the pension fund managers. Because of the fall in the share prices, and through no fault of our own, pensions are now worth almost 20% less than they were a year ago. The government has no plans to compensate us. And share prices continue to head south.

The Tory press is having to bite the bullet. Though the word ‘semi-nationalisation’ comes through gritted teeth they cannot oppose the measures, which their readers’ hope will save their bacon. The Mail and the Telegraph both calculate the total cost to bail out the banks at £500bn (not ‘just’ £50bn). This is more than a third of Britain’s GDP! Here’s their reckoning:

Where is this to come from? If their calculations are correct, the government is laying out £16,000 for every taxpayer in the country. If all the money were taken up, that would double public spending. It would put the entire economy into an iron maiden, with incalculable consequences on the currency and the national debt – just to take two obvious stress points. The government has committed all this without so much as a ‘by your leave’ to their working class supporters. All of a sudden they have money to burn.

Over the past few days the government’s bumbling and fumbling was almost fatal. But their hesitancy is not an accidental psychological flaw. It is inherent in the outlook of New Labour, the bastard child of Thatcherism. In 1997 the present system of regulation was set up. The power to set interest rates was given away by the government and put in the hands of an independent institution – the Monetary Policy Committee of the Bank of England. This action was based on the monetarist belief that monetary policy was solely a matter of worrying about inflation. As Simon Jenkins comments (Guardian 08.10.08), the MPC, “Remains inert, mesmerised by its...fixation with inflation. Worrying about inflation at present is like weeding the lawn when the house is on fire.” The real capitalist economy was held to be stable and automatically reached equilibrium at full employment! So we have to twist the arms of the unelected swivel-eyed ideologues who dominate the MPC to get a cut in interest rates to protect our real economic welfare.

In 1997 the Financial Services Authority was set up to regulate the banks. It seems to have been asleep at the wheel for the past few years of swindling and financial insanity. As a protection against financial hurricanes, the system installed in 1997 functioned perfectly while the financial sea was smooth as a millpond. We see it failing at the first serious test, as things fall apart. The half-wit who devised the 1997 system was Gordon Brown.

Today (08.10.08) shares continue to fall. The markets, credited by New Labour with almost divine wisdom, show all the signs of hysteria. Capitalism is inherently unstable and the crisis won’t blow over.

But New Labour still crawls before capitalism. As John McDonnell explains, “The bail-out is nothing but a subsidy by the taxpayer to the very people who have brought our economy to the brink of collapse.” Reject the plan. We want nationalisation of the banks, but under workers’ control and management, as part of a socialist plan of production.