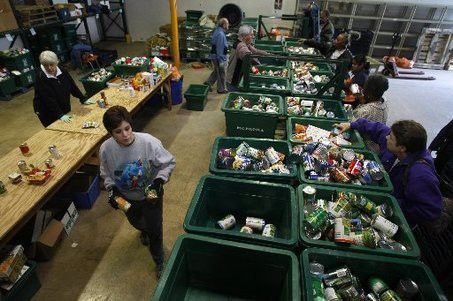 Two major UK charities, Church Action on Poverty and Oxfam, today published a report entitled ‘Walking the Breadline: the scandal of food poverty in 21st century Britain’. The report says that the last five years of violent cuts by the UK government have led to “destitution, hardship and hunger on a large scale”.

The findings of this report will come as no surprise to working and unemployed people for whom the crisis has meant poverty wages and dwindling benefit allowances. In 2012 over 350,000 people turned to food banks for help feeding themselves and their families, in some cases walking tens of miles to reach their local food bank. Dot Jackson of the Barrow food bank said that a woman in her late 50s walked ten miles each way to collect food from her food bank. Meanwhile, according to the Trussell Trust, a 42 year old woman in Salisbury walked a twelve mile round-trip to the food bank because she could not afford the extortionate £5.70 bus fare.

The chilling reports of the real human cost of austerity rarely see the light of day as they are filtered out by pro-capitalist newspaper editors and BBC producers. But the stomach-churning reality slips out here and there, and we hear stories of suicide and self-harm by people who cannot face the physical and emotional toll of benefit and wage cuts. These are ordinary working people, who are being driven to the darkest depths of despair by austerity.

Meanwhile in the lavish surroundings of the Palace of Westminster, Ed Davey, the energy secretary, told the House of Commons earlier this month that it is “completely wrong to suggest there is some sort of statistical link between the benefit reforms we’re making and the provision of food banks”. Furthermore, in response to the publication of this new report a Department of Work and Pensions (DWP) spokeswoman claimed that “our welfare reforms will improve the lives of some of the poorest families in our communities”. Such barefaced lies contradict the facts. There has been an explosion in demand for food banks over the last two years and while food and fuel prices have been steadily increasing, benefits and wages have been capped or cut.

The demand has been rising so steeply that the food banks are unable to meet them. For example at a food bank in Stoke-on-Trent younger single adults had to be turned away as there was only enough food to feed families and over-65s. A volunteer at a food bank in Peckham told how she had spent £700 of her own money buying food so that they did not have to turn anyone away. In Haringey, a food bank was recently evicted from its rent-free warehouse by a property developer and is now in a state of semi-permanent crisis without a fixed location. Food banks rely heavily on donations, either directly from supermarkets or from ordinary members of the public. As consumer spending remains fragile, these sources of food donations are increasingly unreliable. The conditions that are crushing people into food poverty are the very same conditions that are making it increasingly difficult for food banks to operate.

Many of those who volunteer for food banks recognise that they should not have to be doing this: the state should provide for people’s needs. According to the Guardian, one man who runs a food bank is “furious at the way he feels policymakers and politicians fail to understand the often desperate consequences of what may seem like small cuts to the incomes of people already living close to poverty”. As the axe of austerity keeps coming down, cutting all the previously won concessions of the British working class, Britain is heading towards a US model, whereby food banks have become the core welfare provider thus removing responsibility from the government. But despite these fears, these organisations can come up with no real solution because they attempt to work within the confines of the capitalist system that caused this crisis in the first place.

For example, Don Gardner runs the Cambourne, Pool and Redruth food bank in Cornwall but he insists that he takes no interest in politics. The extent of his protest at the present conditions was to write to local MPs asking why there was a need for food banks – unsurprisingly he got no response. Similarly, the report published today calls for nothing more than an inquiry into food poverty by a House of Commons select committee and for more statistics to be published by the DWP. The Reverend Ben Goodyear, who runs the Brixton food bank offers one alternative to lobbying MPs, he says “if we need to grow the food bank more, we will do what we can, and hope God will provide”.

This is the stark reality of the situation facing the UK under capitalism. Increasing numbers of people in shocking poverty, food banks unable to meet demand, failed attempts to plead with the government and ultimately our only hope resting with stories of a supernatural being, peddled by scandal-ridden organisations.

Simply asking MPs to hold an inquiry into the situation will solve nothing. These cuts are not being carried out because of an ideological hatred of working and unemployed people on the part of the government (although that may well exist amongst the gentlemen and women of the Conservative party). These cuts are the result of a global capitalist crisis. In order to maintain the confidence of the hedge-fund managers and City investors, the government must inflict this misery on us. Under capitalism, there is no other choice.

Looking across Europe we see confirmation of this. Governments from all corners of the political spectrum have carried out exactly the same austerity programme as dictated by the IMF, the World Bank and other international finance speculators. One particularly relevant example is Greece, where the PASOK, an allegedly centre-left social democratic party, explained its implementation of horrendous cuts to living standards by saying that it had no choice if Greek capitalism was to survive. Not only were the PASOK abruptly removed from power and their support declined to a pathetic shadow of what it once was, but horrific scenes of a retiree shooting himself dead in front of the Greek parliament building in protest at having to search through bins for his food have been repeated sickeningly often.

Similar conditions lead to similar results. These attacks on the livelihood of the working class are also preparing events similar to the revolutionary explosions we have seen in southern Europe and the Arab world.

If you accept capitalism you must accept the logic of capitalism, and that logic dictates that crisis and misery, like we are experiencing now and which will only get worse in the coming years, are inevitable. In the UK, the Labour Party leadership must recognise this, and should look to the example of the PASOK in Greece to see the result of a workers’ party implementing cuts. The Labour shadow environment secretary’s wholly inadequate response to today’s report was to call the figures “shocking”. The people suffering under the conditions detailed in the report have gone beyond shock – they are looking for someone who will challenge the system that necessitates the abject misery of millions to pay for a crisis that they did not cause.

The trade unions and the Labour Party in Britain are organisations that must mount this challenge. Instead of grovelling at the feet of the bosses and bankers, the leaders of working-class organisations must put forward a coherent socialist programme that argues for an economy run for need and not profit.

The huge multinational supermarkets rake in eye-watering profits and continue to increase food prices. We should argue for these to be taken into public ownership, under the democratic control of the workers. That way food can be distributed to meet people’s needs, not to make profit for shareholders. Public ownership of supermarkets is, however, not enough. These supermarkets are reliant upon suppliers of food and fuel, not to mention transport networks and infrastructure, as well as financial support from banks and other investors. These are the main levers of the economy, both in Britain and throughout the world, and if we are to successfully run society in the interests of need and not profit, each and every one of these levers must be brought under the democratic control of working people, within the framework of a planned economy.

Reports like the one published today are helpful in providing facts and figures about the effects of capitalist crisis, but as long as their proposed remedy is confined by the limitations of capitalism, it will never be enough. Only a wholesale transformation of society along socialist lines can free us from the barbaric chains of poverty and hunger and open up the world to human development and prosperity.