2015 was a turbulent year in British politics, with the general election, mass demonstrations, and the rise of the Corbyn movement. Rob Sewell, editor of Socialist Appeal, looks ahead to what 2016 has in store, as the Tories ramp up their austerity and the Blairites sharpen their knifes in preparation to stab Corbyn in the back. 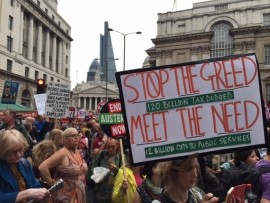 Another New Year, another round of savage cuts. That is what Tory Britain has to offer. Libraries, street lighting and refuse collections are in line to be axed. Community centres, youth clubs and refuges will be drastically cut, as will care for the elderly and most vulnerable in society. At this rate, precious little will be left of the local services on which we depend. If you haven’t noticed the cuts up till now, you soon will.

"All in this together"

Despite Cameron’s rhetoric of “One Nation”, the Tory government is presiding over an ever-more divided society. According to the Office for National Statistics, the gulf between rich and poor is relentlessly increasing. The richest 1% of the population has as much wealth as the poorest 57% combined, according to official figures. In the meantime, the assets of the richest 10% have jumped 21% between 2012 and 2014. This wealth is about five times greater than the wealth of the bottom 50%, and over 875 times greater than the bottom 10% of society.

But this is going to get a damn sight worse, as billions are going to be slashed from local “essential services”, especially from social care and those affecting the old, the sick and the infirm. Our health service is on the verge of collapse, as hospitals are declared “bankrupt”.

The Tories want to “devolve” spending to allow local communities to decide where the axe should fall. Councils are to be made scapegoats for Tory austerity.

This government of big business plans to make the working class pay for the crisis. Local authorities are facing the brunt of the cuts, with 79% of their funding being slashed by 2019/20.

No to all cuts!

Jeremy Corbyn is opposed to these cuts and is offering an anti-austerity alternative. This is absolutely correct. The Labour Party was founded to defend working people. However, rather than urging councils to follow the “legal” dictates of the Tories, the Labour leaders should be calling on all Labour councils to refuse to implement the cuts. We must not allow Labour councils to do the Tories’ dirty work.

The scale of the cuts is too deep for this. The argument that Labour councils would shield people from the worse cuts does not stand up. Even some of the Tories are complaining about the savage level of the cuts. If all Labour councils defied the government, it would provoke a political crisis. This could be the start of a real campaign to drive out this millionaires’ government. It would be the actions of a real Labour Party. As the old adage says, “it is better to break the law than break the poor.”

Unfortunately, the Corbyn leadership is being constantly undermined by the right wing. Day in and day out they are given the maximum media coverage to attack Corbyn and his supporters. Allegations of “intimidation” and “bullying” are being invented to discredit the Left.

Siobhain McDonagh, MP for Mitcham and Morden, who defied the Party membership and voted for the bombing of Syria, has raised a hue and cry about “intimidation”. “Bullying and the hard Left have always been bedfellows”, she writes in the Evening Standard. “I know this because I’ve been here before.”  But this is simply an attempt to slander and cow thousands of party members who have challenged her views over Syria. “This abuse is not legitimate – it’s about a bigger strategy to subdue and cow us as a means of taking over the Labour Party”, she adds.

Clearly, the right wing are losing control over the Party and fear for their parliamentary careers. This has nothing to do with “bullying” and everything with the right’s control over the party. We have certainly “been here before”, when the right wing attacked the supporters of Tony Benn as the “Looney Left”, in their witch-hunt to drive the Left out of the party. “We beat them before and we must do so again”, warns McDonagh.

She was joined by Labour MP Jess Phillips, who has spoken openly of her determination to knife Jeremy Corbyn “in the front” if it looks like he is damaging the party’s chances of success. Of course, the right wing can get away with such threats, with the full support of the Tory media.

“At the moment I would say we wouldn’t win the general election,” said Phillips, who is the newly-elected MP for Birmingham Yardley. But every vow to stab Jeremy Corbyn “in the front” by the right wing can only be viewed as a deliberate attempt to discredit the party and prepare the ground for its defeat.

Lord Mandelson emerged from the shadows to tell a gathering of Labour elders and peers in the House of Lords of his horror. "Thirty thousand long-term members have left the Labour Party, real members of the Labour family, tens of thousands”, he said. He then states openly, "There are now two Labour parties."

This is a clear warning to Labour. The right wing is clearly preparing to split the Labour Party, as they did 1982 and 1931. They represent a Blairite Trojan horse within the Party. At a certain point, when they realise they cannot win, they will stab the Party in the back, in an attempt to prevent a Corbyn Labour government.

The only way the Labour Party can defend itself is to end the right wing control of the Parliamentary Labour Party, which is diametrically opposed to Corbyn and the membership. Local parties have a right to have MPs who genuinely reflect, not the past, but the new revitalised Labour Party. This is a democratic right. We can no longer tolerate Tory carpetbaggers in our midst who are intent on fomenting civil war.

The fight to cleanse and transform the Labour Party must go hand in hand with the fight for socialist policies. The problems we face – unemployment, homelessness, casualization, poverty wages - are a product of the crisis of capitalism, which cannot be resolved by patching up the system. The end of the coal mining industry, the collapse of steel, and the demise of manufacturing are a reflection of this crisis.

Labour must return to its socialist roots. We must reject the capitalist policies of monetarism and Keynesianism, which are head and tail of the same coin. Only by taking over the commanding heights of the economy, the giant monopolies, banks and insurance companies that dominate our lives, can we produce the things we need. Instead of production for profit, with its programme of austerity, we can establish a socialist plan of production.

On this basis, we will put an end to the wastage and pollution of capitalism. Industries can be run democratically under workers’ control and management. This will enable us to abolish unemployment, guarantee a living wage for all, end homelessness, cut the working week, introduce early retirement on decent pensions, and build the homes, hospitals and schools we need so badly.