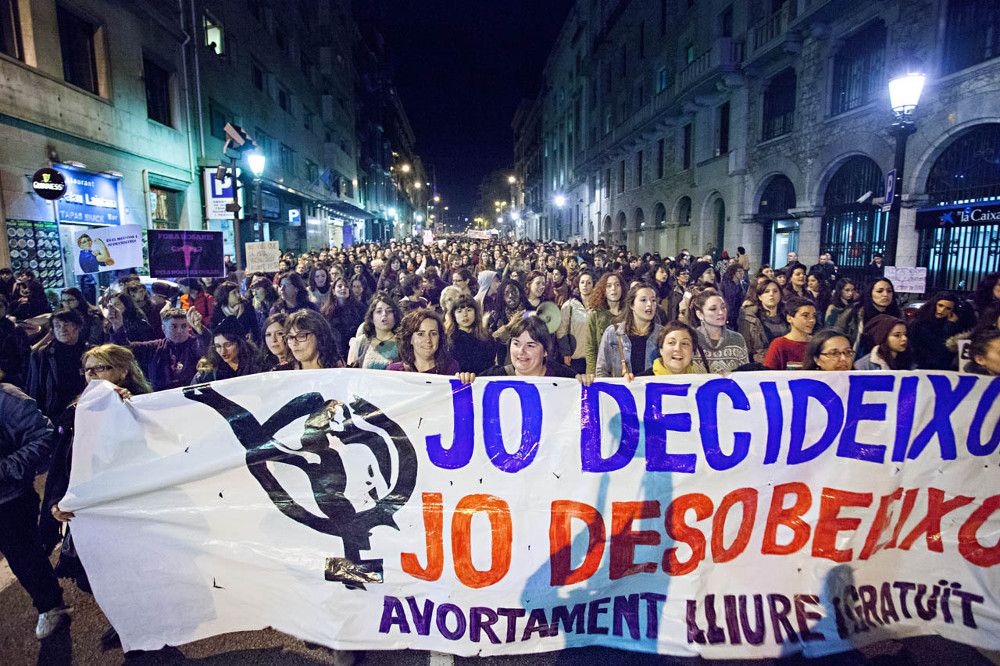 On September 19th, the right wing Popular Party government decided to abandon its unpopular plan for a reactionary reform of the abortion law. We publish here this article written in March by a member of Lucha de Clases (Class Struggle), the Spanish section of the IMT, explaining the motivations behind the proposal and outlining the reasons why Marxists opposed it.

Minister Gallardón’s current draft bill, if passed, would mean the approval of the most restrictive abortion law since the end of the Franco dictatorship. Interrupting pregnancy would cease to be a woman’s right during the first fourteen weeks, a right that has only existed since 2010, and would go back to being merely “decriminalised” as it was under the law of 1985.

The exceptions are limited to cases of rape and “extreme danger to the life or psychiatric or physical health” of the woman. It would be the doctors who would decide if there is such a danger. The existence of serious foetal deformities would not be an accepted reason for having an abortion, although the psychological effects this could have on the mother would be accepted.

With the government’s counter-reform, women without economic means who wish to abort, or who are obliged to abort because of their circumstances, would have to overcome a series of obstacles which would not be faced by upper-class women. Psychiatrists of the Spanish Association of Neuropsychiatry (AEN) are warning that if this plan is passed Gallardón’s reforms will plunge women “into an administrative labyrinth, with the resulting increase in unnecessary suffering that this delay would bring with it”, both for the woman and for her immediate family. In the same way, they foresee that those women who are able to travel abroad will do so in order to abort “in more civilised conditions”, and a return to a situation where abortions take place “in deplorable conditions for the poorest and worst-informed women”. Abortion is thus reduced to a question of class; women of the upper-classes will be able to abort in appropriate conditions, whilst those of the lower classes will do it in very bad conditions, risking their lives in the process.

The removal of the clause that allowed abortion in the case of foetal deformity is especially serious for working-class women, and what’s more, this comes after cuts to benefits provided by the Dependency Law with the conservative Popular Party’s (PP) austerity policies. Having to look after a child that needs constant attention, as well as money for medication, place big limitations on those families that cannot afford to hire someone to look after their child, making their situation even more painful and distressing. Once again, the economic question broadens the gap between the upper-classes and the working class.

In the USA, the number of abortions has reached a historic low, dropping to the same level as in 1973, thanks to the investment in sex education, particularly of the youngest women.

The debate has also affected Latin America, drawing attention to the differences between neighbouring countries. On the one hand there is Argentina, where around 400,000 backstreet abortions are carried out each year, leading to an increase in the mortality rate amongst women due to the unsafe conditions in which they are carried out.

In fact, many international organisations have already raised the alarm over the high number of deaths related to backstreet abortions. In Argentina, according to the Observatory for Reproductive and Sexual Health, one in every four women who die due to causes related to pregnancy does so because of complications relating to a botched abortion. It is the number one cause of maternal death in the country.

At the other extreme is Uruguay which, just one year ago, became the first country in Latin America, after Cuba, to completely legalise abortion. According to the Uruguayan Ministry of Public Health, in 2013 2,550 abortions were carried out, and not one woman has died during these interventions. In spite of this legislation, Uruguay remains a country with one of the lowest rates of abortions in the world.

It is not at all an easy decision for any woman to abort and it may have subsequent psychological effects, but women choose this option in the face of the burden of raising a child, especially given the lack of job security, lack of housing, low salaries, and of simply not being in a condition to dedicate themselves to an unwanted child. As we have already seen, good quality sex education provided in state schools, the existence of family-planning centres and easy access to contraceptives reduces the number of abortions.

Many protests have taken place against Gallardón’s counter-reform all over the country. These protests, which are still taking place, reached a high point with the arrival of the Freedom Train (Tren de la Libertad) in Madrid on 1st February, with male and female protesters from all over the country demanding the withdrawal of this restrictive proposal which would mean an enormous step back for women’s rights.

In the Dignity Marches (Marchas de la Dignidad), which will be arriving in Madrid on 22nd March, the participants will also be demanding that this proposal be withdrawn. The protest movement must get stronger in order to prevent this draft bill being approved in Parliament. It is up to us to resist tooth and nail this attack from the most rabid reactionary section of the right wing on a woman’s right to decide.

We as Marxists defend the right to a free abortion as a woman’s democratic right.