New from Wellred USA! The first US edition of Bolshevism: The Road to Revolution by Alan Woods. This monumental 500+ page study of the history of growth and development of Bolshevism demolishes the myths of both Stalinist and pro-capitalist historians of the Russian Revolution. Order your copy online from Wellred USA now and save $4 off the cover price. 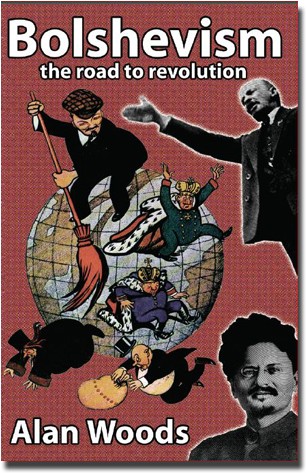 Bolshevism: The Road to Revolution

There have been many books and potted histories of the Russian Revolution, either written from an anti-Bolshevik perspective, or its Stalinist mirror image, which paint a false account of the rise of Bolshevism. For them, Bolshevism is either a historical “accident” or “tragedy.” Or it is portrayed erroneously as the work of one great man (Lenin) who marched single-minded toward the October Revolution. Author Alan Woods* reveals the real evolution of Bolshevism as a living struggle of various class forces, tendencies and individuals.

Using a wealth of primary sources, Woods uncovers the fascinating growth and development of Bolshevism in pre-revolutionary Russia up to the seizure of power in October 1917. This is the first U.S. publication of this monumentalwork. It comes at an important time, as the world economic crisis calls for a thorough study of workingclass history in order to educate a new generation of revolutionaries. 571 pages.

Praise for Bolshevism: The Road to Revolution:

“...one of the finest historical/analytical works the Trotskyist movement has ever produced.”
- Ian Donovan (Weekly Worker)

*Alan Woods studied Russian at Sussex University and later in Sofia (Bulgaria) and Moscow State University (MGU). He has a wide experience of the international labor movement and was involved in the Marxist movement in Spain, where he participated in the struggle against the Francisco Franco dictatorship. He is the editor of the popular In Defence of Marxism website (www.marxist.com) and the author of many books, including several that are also available from Wellred Books, Marxism and the U.S.A., Reason in Revolt (co-written with Ted Grant) and his most recent book, Reformism or Revolution: Marxism and Socialism of the XXI Century, also available from Wellred USA.