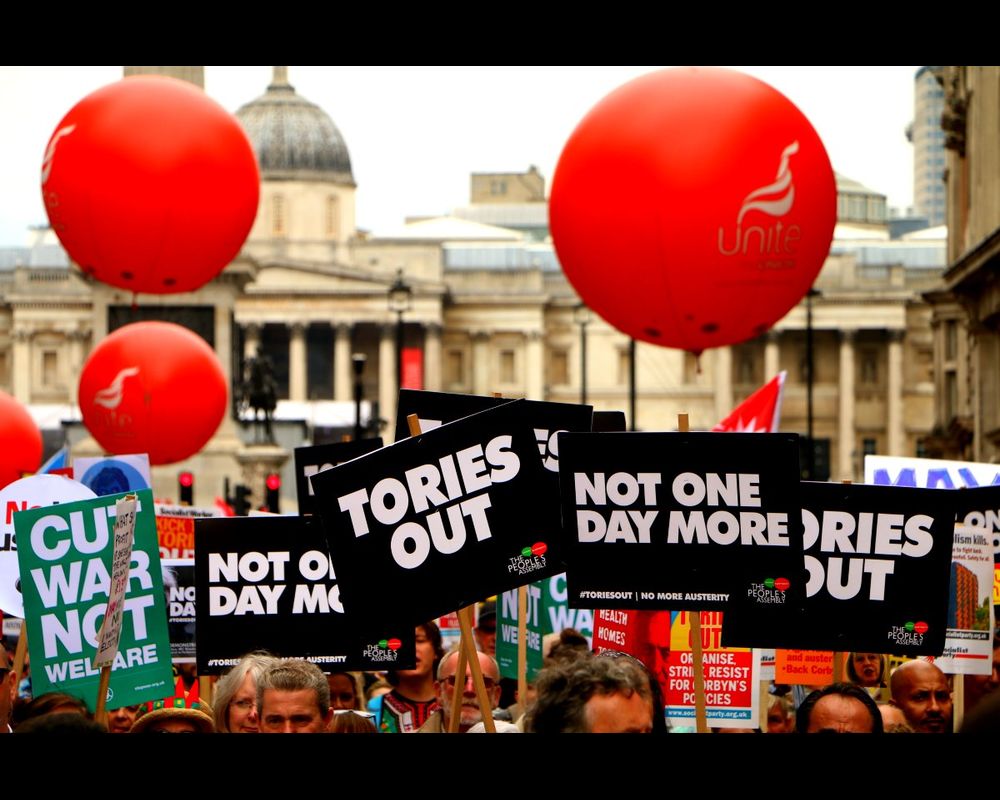 The mood was jubilant and euphoric in central London on Saturday 1st July, as chants of “Oh Jer-e-my Cor-byn!” rang out through the streets of Whitehall and Westminster.

Unlike some demonstrations in the past, this protest - with an estimated 100,000 trade unionists, activists, and youth marching - felt less like a funeral procession and more like a victory parade. It was evident from the demo that, in the wake of Labour’s shock general election success, an overwhelming sense of optimism now pervades the labour movement. “What an epoch we’re living in; what an exciting time we are living in,” proclaimed Matt Wrack, general secretary of the Fire Brigades Union. “For you young people, what a privilege it is to be alive at this time.”

Although the national demonstration was called by the People’s Assembly under the title Not One More Day: #ToriesOut, the protest was just as much of a pro-Labour demo as an anti-Tory one, as reflected by the number of Labour and Corbyn t-shirts, banners, and placards - not to mention the spontaneous chants of the Labour leader’s name that broke out intermittently to the tune of the White Stripes’ anthem, Seven Nation Army.

Speakers at both ends of the march, including John McDonnell, Diane Abbott, and Len McCluskey, all spoke of the importance of mobilising and organising now to fight for a Labour government with a bold, left-wing programme. As Owen Jones, the Guardian journalist, accurately summarised from the platform: “it is now a matter of when, not if, Labour will be back in power and Jeremy Corbyn will be Prime Minister.”

Following on from his headline appearance at Glastonbury, it was the Labour leader, Jeremy Corbyn, that everyone was most excited about hearing from at the demo’s concluding rally, with the crowd in Parliament Square eagerly awaiting Britain’s most popular politician. Even when he was finally introduced, Corbyn could barely get a word in, such was the volume of the applause, clapping, and chanting.

Corbyn, as with many other speakers, made reference to the stinking hypocrisy and callousness of the Tory government and their media lackeys on issue after issue, from the public sector pay cap to the Grenfell fire tragedy. “We’ve seen the utter hypocrisy of government ministers and others,” Corbyn stated categorically to the rally audience, “who’ve heaped praise on the emergency services, only to then - the very next day - cut their wages by refusing to lift the public sector pay cap.”

Elsewhere, there were plenty of mentions of the “magic money tree” that May and the Tories have managed to conjure out of nothing in order to bribe their new allies in the DUP. Having told us during the election campaign that there is no money available to raise public sector workers’ pay, we now see the Prime Minister and her negotiators able to pull an extra £1 billion out of their hat in exchange for DUP MPs propping up May’s “weak and wobbly” government. 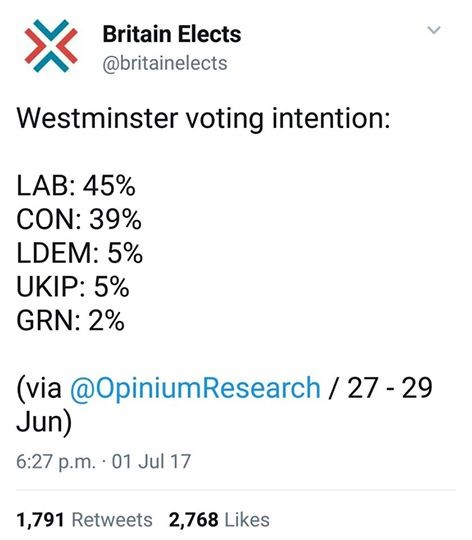 With an overwhelming young and dynamic crowd in attendance, it was clear from Saturday’s march that the future lies with Corbyn’s Labour. Already, the latest opinion polls give Labour a six-point lead over the Tories, on 45% and 39% respectively. Meanwhile, Corbyn has begun campaigning in newly-winnable marginal seats, speaking in Parliament Square on Saturday after coming directly from a rally in Hastings - currently controlled by Amber Rudd, the Tory home secretary. Elsewhere, Momentum activists are organising in places such as Chingford and Uxbridge in order to claim the scalps of high-profile Conservative figures such as Iain Duncan Smith and Boris Johnson.

The wind is now firmly in the sails of the Corbyn movement. As evidenced on Saturday’s protest, a whole new generation have been brought into politics, actively participating for the first time in an effort to put Corbyn in Downing Street and transform society. With one more push, utilising the full force of the entire labour movement, we could see the end of May and this rotten Tory government. The scene would then be set for the next fight - to bring Labour to power on a socialist programme.