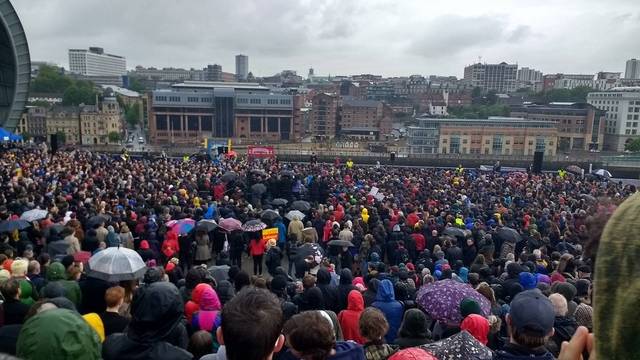 On a rainy Monday evening, on the muddy banks of the Tyne, 10,000 people gathered to hear Jeremy Corbyn speak. The mood was optimistic and jubilant just three days ahead of the General Election, and a sense of the historic opportunity that lies ahead of us was not missed on the crowd.

Comrades from Socialist Appeal and Newcastle Marxist Society arrived early, at 5pm, to stake out a spot on the top of the hill overlooking where the rally was to be held. When we arrived there was a few hundred people there. In a short space of time this became 1,000. There was an excitement in the air as people gathered and felt their strength growing. 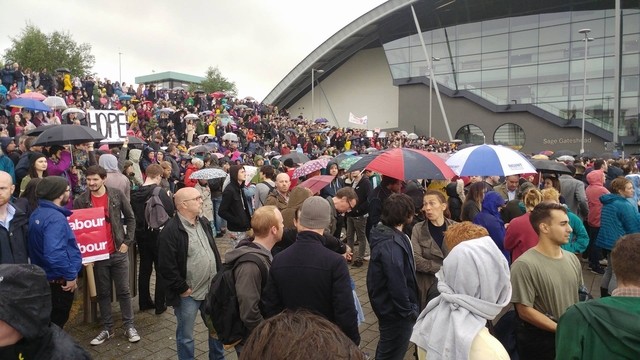 You could see a steady stream crossing the Millennium Bridge and even people sprinting up the hill to get to the venue. Within the hour the attendance was up to 4,000 people. By the time the rally actually began, the crowd had swelled to over 10,000. So many people came to the rally that 5,000 of them were unable to get into the venue and listened to the speeches from microphones in an overflow areas in the neighbouring carpark. There was an additional 4,000 people streaming the event live online.

At least two thirds of those present were young people, those below the age of 30, although it also included the elderly, public sector workers, the unemployed, students and the disabled. This movement that Jeremey Corbyn has become the leader of was highlighted in his speech when he said, “We’re black, we’re white, we’re gay, we’re straight, we’re young and old.”

“Our Policies are Better”

The northeast of England has been one the areas hit hardest by the de-industrialisation of the 80s and 90s. This is also one of the areas where the effects of the right wing turn of Blairism lead to an erosion of the Labour vote. It is only appropriate then that the resurgence that can be felt around Corbyn gets just as enthusiastic of a reception here as it does anywhere else in the UK. 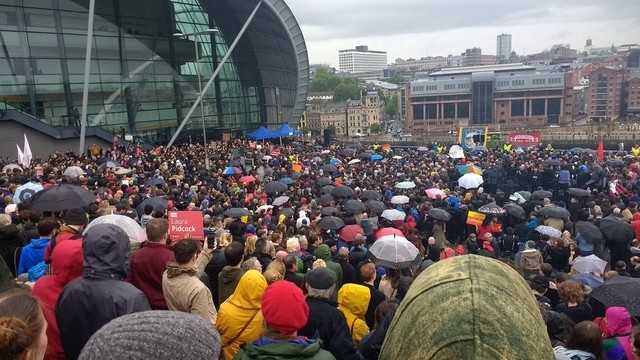 The policies set forward in the Labour Party Manifesto were the main focus of the evening with each speaker raising various points. Ian Mearns spoke about his experiences of canvassing in previous elections in comparison to the feeling on the streets today. He said, “In 2010 and 2015 we were arguing for people to vote Labour because we weren’t as bad as the Tory. Now, finally, because of this Manifesto, we can go out there and argue for people to vote for us because our policies are better.” Gone are the days of people voting through gritted teeth. The current manifesto, along with Jeremey Corbyn’s leadership, has provided real hope to a mass of people who had historically been ignored and alienated by the politics of Westminster.

Chi Onwurah spoke about her experiences as a young woman growing up in the 80s and studying to be an engineer. She ended her speech by making an appeal to all women to vote for Labour and support Jeremey Corbyn. This was not just for the sake of doing so, but was an appeal on a class basis to defend women workers. She talked about the inequalities that women workers face in the workplace and at home and drew the link between this and the impact of Tory austerity. It was said that Margaret Thatcher and Teresa May have done nothing for working women and it is only the working class and a Labour government who will be capable of fighting for a world of genuine equality for all.

The only part of the whole evening that fell flat on the crowd was references that were made to the need for more police on the streets. Vera Baird, Northumbria Police and Crime Commissioner, spoke for several minutes about Labour’s plans for policing and defence budget increases, but did not provide any substance or hope. All the points made by Baird were met by, at best, a chilled, obligatory applause. No explanation was provided for why terrorism has become more prevalent or on how we would go about addressing the issues which give rise to it.

For the Many, Not the Few

At 7.30pm when Jeremy Corbyn himself hit the stage he was greeted with a hero’s welcome. Chants of “Corbyn” and “Jezza” filled the air as he launched into his inspiring speech.

After going through the manifesto pledges which have been put forward, a stark difference was drawn between what is on offer from the Labour Party and the Tories. Corbyn jokingly referred to the Tory “magic money tree” which exists allowing for tax cuts and handouts to those at the top of society whilst the majority of working people are getting less and less. This is also at a time when public services are being squeezed to breaking point. The NHS, our schools, housing, all of these are in crisis, and a Tory government threatens further devastation if they are allowed to remain in power.

Corbyn made the point that regardless of what happens on Thursday we need to fight to take this movement forward.

A Tale of Two Campaigns

Throughout the election campaign, Theresa May has been hiding from the public wherever possible: avoiding debates, interviews, and proper campaign rallies. The latter was on full display when May visited the North East a month ago. She was flown in to a remote airfield in Northumberland and met by a small group of people. Later during her brief trip, she visited the Linskill Centre, a community centre the Tories nearly forced to close. While there, she avoided public scrutiny by restricting the event to a press conference and then sneaking out a back door where a few people had gathered to denounce her. 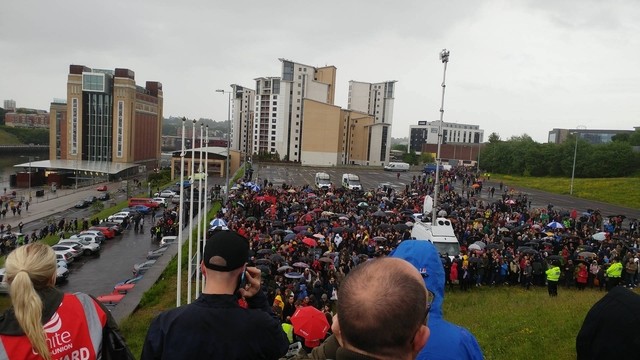 On the other hand last night’s rally for Corbyn and the Labour Party was able to bring together all that was young, vibrant and healthy in society. Many people have been mobilised who had never gotten involved with politics before and have left with a big impact having been made on them.

“I feel like I was part of a revolution!”, said Lexie, an NHS Nurse who was attending her first political event. She went on to tell us, “I felt like he actually cares about us little people, especially the ones who are watching their jobs slowly get transformed into the private sector. He actually empowered me and I felt like this time my vote actually matters!”

When asked if she had a message to other workers, Lexie told us, “If you work for the NHS or public sector don’t give up hope. If you still don’t know who to vote for, vote Labour. Corbyn is honest and tells it how it is with his manifesto. He can save our jobs and livelihood and the NHS. Corbyn is the protest vote. A protest for change we all desperately need!” 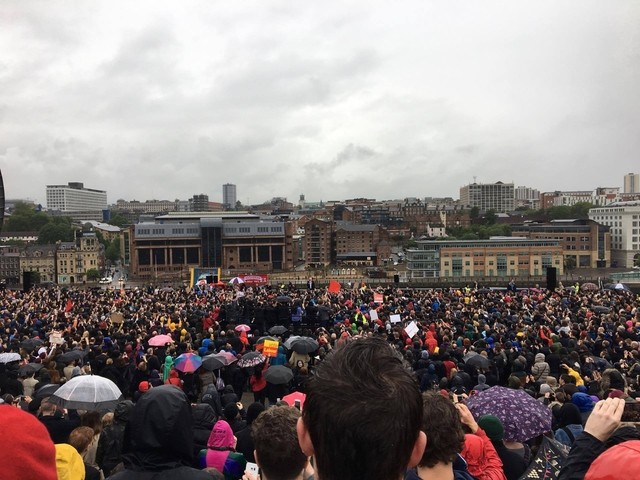 Lauren, a student at Newcastle College told us, “I went to the rally so I could show my support to this movement which I believe is the only way forward for us to build a more equal society.” After the rally she said, “I felt full of pride and hope. I felt unified with others and my community and, for the first time in a long time, I felt the northeast and working class’ voices were being heard and represented in politics.”

“If anything I would encourage everyone to vote and to think about things from a human rights standpoint. Yes, the economy is important, but the quality of human life is of much more value. We deserve better; we deserve to be heard. We deserve healthcare and education and a living wage that we can actually live on. Please, get behind Corbyn and your local Labour MP to make this change that so many are in desperate need of. Jezza Knaaas.”

“I came to show my support as it’s the first real opportunity I’ve had to attend an event like this. I feel that Corbyn actually believes he can deliver most of his policies and also that he has managed to get the right people to believe in him. Ex-pitmen, health care workers, teachers. These are all the right people to win over as well as the next generation. He realises that it’s not us that will feel the differences but it is our children and their children that our decisions will effect the most. All public sector workers should unite as one and stand together and save public sector jobs and fight for what they deserve.”

These quotes give a flavour of the mood amongst the crowd.

“Corbyn is the Revolution!”

Throughout the evening there was a festival like atmosphere. As music was playing and as the crowd gathered, people were dancing in the rain waiting for the event to begin. Everyone was optimistic and full of hope. A turning point has been reached, and the sense that we can actually win this election has begun to permeate amongst more and more layers of the working class.

One of the most interesting placards of the evening was one which simply stated “Corbyn is the Revolution!”. For many people, that is the case. Jeremy Corbyn and the movement built around him represents a huge shift in the political discussion in the UK, and it will be difficult, if not impossible, for the clock to be turned back on this.